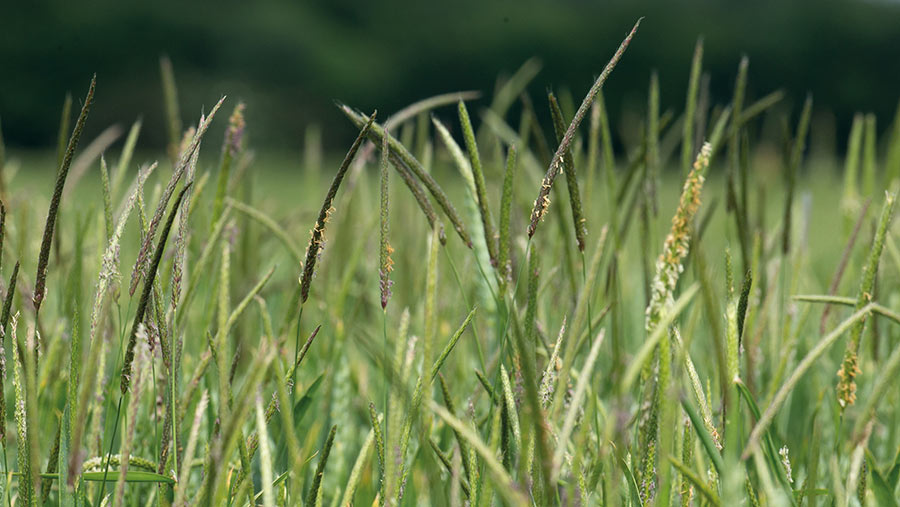 June is the time when it becomes clear how effective weed strategies have been, with seed heads waving in the wind above crops. Contact herbicides struggled to give good control in the cold April.

In Scotland, rat’s-tail fescue has been quietly spreading along field margins, and blackgrass has also been making unwelcome appearances north of the border.

Crops always catch up with the season, more or less, and this month has been the one when they really jumped. Moisture and some long-awaited warmth brought the growth we were looking for, and yet disease pressure has remained reasonably low.

See also: Graham and Extase tipped as wheats for the South West

Winter wheats are now coming up for head sprays and look full of potential. They have recovered well from the wet winter and in most cases, septoria has not developed above the very lowest leaves. Varieties with less resistance are noticeably more infected and I will be keeping the timings shorter there.

Revystar (fluxapyroxad + mefentrifluconazole) appears to be doing a good job suppressing septoria. Yellow rust has not been as much of a threat as was expected, although it has been more of a challenge to spring wheats.

It is a worry that we are now so dependent on tebuconazole. I am trying to add a mixing partner, or avoid it and go for other options for the head sprays. Prothioconazole plus a strobilurin is one tebuconazole-free alternative.

Spring barleys look tremendous and have remained clean throughout the season so far. I have one or two places where we have gone in with Cerone (ethephon) just to keep the rampant growth under control. Discussions with other agronomists suggest I am not alone.

Winter barleys are just beginning to turn colour. Some of these are exceptionally tall as well, despite heavy-duty plant growth regulator programmes.

I expect to see more variation in yield in the winter barleys as some of them spent a lot of the winter in very wet conditions. While they now look good from a distance, some of these crops are a bit thin.

Weeds have been a feature of the season again. It has been similar to 2020 in too many ways already, and the late flushes of weeds were most unwelcome.

The broad-leaved weeds were hit with Zypar (florasulam + halauxifen) where necessary, but grassweeds continue to appear, and rat’s-tail fescue has been quietly spreading along field margins. This weed and its close relative squirrel-tail fescue are notoriously difficult to control with herbicides.

Ploughing into the field corners will do some good, and a considered choice from the limited chemical options will be needed next season.

Blackgrass is also beginning to appear in more new locations north of the border, mostly at gateways or along tracks. Scottish growers need to stamp it out while they can.

I take no credit, but the jet stream has come up trumps again with some warmer weather and good radiation levels in the run-up to the longest day, which is ideal for filling pods and ears of the autumn-sown crops.

Wheat following the May rains is looking to have good yield potential, but we are now coming to the tell-tale time of how efficacious we have been with our fungicide programmes. As expected, those rains have significantly increased disease risk, septoria is starting to develop on leaves 2 and 3.

In my region, we can grow septoria like other regions grow blackgrass. All my flag leaf sprays used the latest fungicide chemistry; I am certainly not looking at crops and thinking I should have spent less. It will be interesting to look at trials over the coming weeks, as I’m fairly sure even this new chemistry has not been tested under the septoria pressure the wet May will have provided.

As a result, T3s have been as much focused on topping up foliar disease control, as most have flowered in dry low-risk fusarium conditions.

Yellow rust has been controlled well by the fungicide programme, apart from the odd variety that we really shouldn’t be growing anymore, but T3 will cover this as well with tebuconazole in the mix, it is rare brown rust is a significant disease for us so this should be the last spray.

June is also the time you find out how well your grassweed programme has worked, with seed heads making their unwelcome presence felt above the crop. The cold April has had an impact in that none of the contact grassweed herbicides have worked well.

We don’t have the levels of blackgrass of other regions, but ryegrass and more mixed populations of brome species are just as troublesome for us.

These will be the subject of much discussion at cropping meetings over the next few weeks as cultural control strategies will have to be stuck to in an effort to wrestle back some control.

Despite the challenges and angst they cause, OSR crops look to have reasonable yield potential as usual, as even the poorest of crops have turned around and are worth persevering with. They seemed to flower for an eternity, which ended quickly once the warmer weather arrived.

Sclerotinia infections look to be fairly minimal even in crops that had a single spray. But it is a crop that I find impossible to predict yield on, so the combine will be the true measure of success.

The high price for OSR and it’s recovery this season may mean growers again giving it more consideration in the rotation, plus it is an autumn crop we can legally apply poultry litter or farmyard manure on!

Spring cereal crops have grown rapidly in the past month as always, making timely management challenging. Most will have had their T2 by the time you read this. Disease levels are currently low so we hope for good protectant activity.

Maize crops have liked the warmer weather after a very challenging start, pre-em weed control was disappointing, but post-em herbicides look to be working well so far.

Harvest is now in sight, and with up to 55mm of rain in places recently crops look full of potential in the run-up to harvest. However, very top-heavy looking winter barley crops are at their heaviest and most vulnerable, and would benefit from no more rain again until after harvest.

Winter barley crops are still disease-free with no real evidence of ramularia. Whether the variety is hybrid or a conventional six row, they have done an excellent job of suppressing blackgrass this season, something to consider when finalising cropping plans for next year.

Grassweeds are now clearly visible above the winter cereal crops, much to the annoyance of farmers and agronomists who spend half the year trying to reduce this annual show. Where the weather allowed, autumn residual herbicides, particularly flufenacet have had a good year.

Generally, blackgrass plant control was very good last autumn, but a slow spring and thinner crops and no lack of moisture have allowed the few remaining blackgrass plants to get very big.

The rain in May and June has also encouraged a second flush of broad-leaved weeds in winter and spring cereals. More use of sulfonylurea herbicides based around metsulfuron-methyl used relatively late in the season could have implications for any following winter oilseed rape, particularly in min-till or direct drilling situations and cropping decisions need to be considered carefully.

Spring crops of barley, wheat, oats and pulses are at varying points within a three-week interval between the timing of T1 and T2 fungicide applications. Where the timing has not been allowed to become too long, disease levels are low despite the amount of rain received.

Winter beans have really benefited from the rain and grown away from any disease in the base of the canopy so far from a mix of tebuconazole and azoxystrobin at T1 fungicide timing followed by boscalid and pyraclostrobin working well so far.

To quote Jeremy Clarkson “We did a Thing!”. We’ve nearly made it to the end of what feels like a frantic, but, hopefully, rewarding season.

Recent heavy rain has provided more than enough moisture to carry combinable crops through to ripening; now they need lots of sunlight and average temperatures to maximise grain fill.

Thankfully, most wheats received an ear spray before the rain to minimise fusarium infection during anthesis. The rain has also temporarily dampened aphid populations that were just beginning to rise, but continue to monitor these for treatment threshold.

Recent wet and warm conditions will drive septoria and yellow rust infection and if there is a return to warm and dry weather, brown rust pressure will increase.

In trials, differences in disease levels between treated and untreated plots are already very clear; this season looks set to provide some good insights into the relative strengths and weakness of new and existing fungicides and varieties. 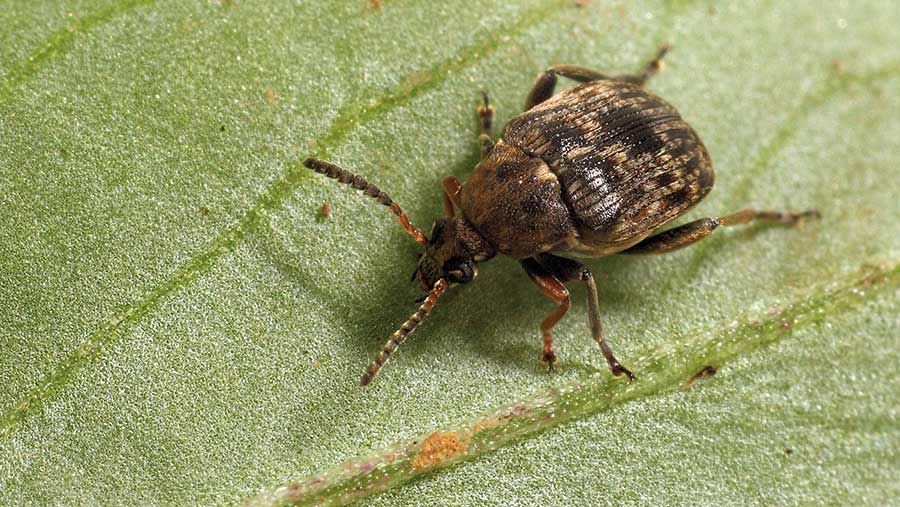 Check for aphid colonies in peas and beans as these will build quickly in warm temperatures. In peas also check traps for pea moth and pea midge. Remember pirimicarb (such as Aphox) can only be applied once (maximum dose 280g/ha of active).

Continue to monitor spring beans for Bruchid beetle, if you are minded to attempt to control this pest – the trigger at pod set is when temperatures reach 20C on two consecutive days.

Where a foliar nitrogen is planned on milling wheats to achieve quality specifications, this can be applied from watery to milky ripe. Take care to avoid scorch by applying this in cooler, dull conditions.

It’s time to reflect on this whirlwind of a season, the lessons learned, and to make plans to start anew after harvest. Take time to evaluate your crops and weed populations.

Also, while the soil is moist it is a good time to dig and assess its health and structure. Use these valuable assessments to help plan autumn cultivation and herbicide strategies.

Start planning crop choices, variety selection and sowing dates; perhaps the rotation needs a tweak to tackle a specific issue, such as blackgrass for instance.

What will be your strategy to establish rapeseed and cover crops? How will you adapt this according to conditions and pest pressure?

As I always say, discuss this with your agronomist –  they like a challenge!