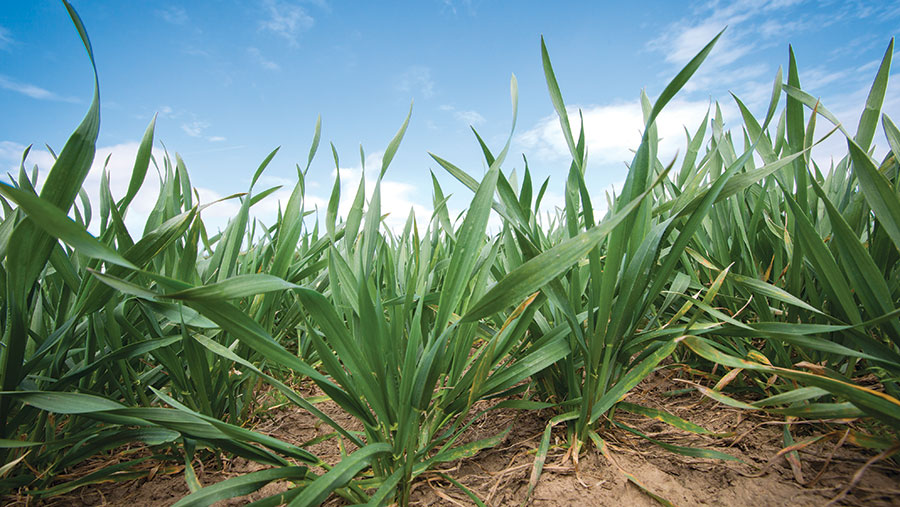 It is proving to be a very challenging season of extremes, with wet fields rapidly turning into dust, and drought-like conditions causing new headaches for agronomists.

One example is what to do with growth regulator programmes, as the dry conditions make it more difficult to justify growth regulation, especially in short, backward crops. However, there is a lot of fertiliser sat on dry soils and when the rain comes, there could be a burst of lush growth that will be difficult to manage.

The lack of moisture is also making weed control decisions more difficult, as residual herbicides are less effective in dry soils. This means there could be a greater reliance on post-emergence applications in some spring crops, especially if rain stimulates flushes of weeds.

What a difference a few weeks of dry weather has made, allowing a significant amount of field work to be completed. While you have to be careful what you wish for, a few April showers would be very welcome.

Winter cereals vary considerably depending on when they were drilled, and the conditions they have been subjected to over the past few months. That said, all crops are now starting to move through their growth stages, with the most forward crops beginning to reach growth stage 31-32.

T1 recommendations have been planned, with yellow rust dominating the decision-making process. With active rust present in susceptible varieties, they will have the addition of a strobilurin to build additional resilience into the programme and to offer some mitigation against stress, should the weather remain dry.

Septoria can also be found in the base of many varieties, which is not unsurprising given the mild, wet winter. This will act as a source of inoculum to infect the upper canopy if the weather turns more unsettled. With warmer temperatures, latent periods will be relatively short, so ensuring new growth is protected is critical.

Growth regulation decisions always become more difficult in drier conditions. Early growth regulator plans have either been held back or revised to take into account the condition of the crop and the recent cooler temperatures

However, with most crops still waiting for the second dose of nitrogen to be taken up when rainfall does occur, crops could put on a lot of rapid growth, particular on quality wheats where nitrogen rates are higher. It is important to ensure that plant growth regulator (PGR) strategies reflect this risk.

Spring barley
Most spring crops have been established in good conditions. Spring barley, in particular, is emerging well where it has been drilled into moisture. In crops destined for malting, nitrogen applications are being completed once the crop has fully emerged.

For land originally destined for winter wheat that has now gone into spring barley for the feed market, nitrogen will more than likely be applied in three splits, to reflect the overall higher application rate, but also to allow some flexibility to take into account the current dry soil conditions.

With warming temperatures, pests are more abundant with high levels of pea bean weevil in pulses, as well as flax beetle in linseed, all of which have required an insecticide treatment. If applying insecticides, consider adding phosphite applications.

Beans respond particularly well in building root biomass through early lower doses of phosphite, which will further enhance its ability to forage for moisture and nutrition.

Certainly, 2020 already fully qualifies as an annus horribilis, but just when you think it can’t get any worse, it does. February’s rain deluge has given way to drying easterly winds and drought-like conditions.

I have never known a season where there is so much contrast in crop growth stages. Wheat ranges from leaf three emerged to only having three leaves. T1 timing is rapidly approaching and the September-drilled crops are ready to go.

The run of dry weather has given us a chance to modify plans, including being more flexible with product rates and the ability to use older chemical products. I appreciate that we are protecting for what weather is coming, but with the forecast showing no rain for the coming 10 days, I think we can manage the risk.

Yellow rust is bubbling away nicely in many crops and, sadly, Firefly looks as if it could live up to its name. Unfortunately, you cannot ignore this, and only three varieties – Costello, Siskin and Crispin – give me comfort that they have no significant yellow rust risk.

As for the rest of my wheats, I am afraid it will be a helter-skelter ride balancing risk and timing. The array of sulphonyl urea grassweed herbicides has taken its toll, and checked crop growth. There is always a balance between weed control and crop check.

Added to this is the poor performance against blackgrass. In some fields, we have decided that the best way forward is to desiccate areas of blackgrass later in the season rather than be disappointed by the herbicides.

There is a continual battle with decisions: Do I regulate growth? How many fungicides should I use? How much spend can I justify?

In the good crops, we are now approaching flag leaf emergence, and these will need a second growth regulator. This timing is perfect for the first chlorothalonil and depending on the previous fungicide timing, may receive a top-up of an azole. For the backward crops, which are barely 10cm high, the crop growth stage is the same, but justifying a second growth regulator in these dry conditions is difficult.

We have a record area of spring barley, the majority of which did get a pre-emergence herbicide, as the seed-beds were bone dry. At the moment there are few, if any, weeds and we will wait for the rain before committing to a herbicide combination.

Oilseed rape is really a tale of woe and the remaining crops are limping into flower. Good crops are certainly the point of discussion, as they are so rare.

The sclerotinia risk currently is very low, but anyone who has experienced damage in the past will apply a mid-flower fungicide. This can be done very cost-effectively and doesn’t have to break the bank. To add insult to injury, I am finding more seed weevil than normal, so this could also require an insecticide.

Most spring drilling is now complete in the South, with crops emerging in 10-14 days in good seed-beds. Given the speed of emergence, spring crops will have a fair chance of achieving good yield potential. However, they are crying out for rain – with most areas in the South not having seen any precipitation at all in April.

When choosing contact herbicides, priority should be given to controlling the most competitive, yield-suppressing weed species such as cleavers, blackgrass, wild oats and bromes. Crop competitiveness will also be the key to good weed control.

Spring barley and some spring wheat varieties produce an early prostrate growth habit. Combined with rapid leaf development, this has been determined to be linked with reduced weed growth.

Sclerotinia risk
Oilseed rape crops that are in full flower will now potentially be under threat from stem rot disease. Sclerotinia resting bodies in the soil will germinate when soils are moist and above 10C, resulting in spores being dispersed by the wind throughout the crop.

When petal fall occurs, this produces a food source that allows the fungus to infect leaf and stem tissue. Fungicides containing azoles, SDHIs and strobilurins will offer effective control.

Winter wheat crops are moving on, but given the dry, cool conditions, there has not been as much growth as could have been expected. Most crops have received a T0 fungicide in the past two weeks, with some omissions where growers have factored in low-risk, clean varieties such as Extase.

Who could believe that weather conditions could change so dramatically? A month ago, I was hoping it would stop raining to allow some fieldwork to be done. Within a week, it had, and the ground was drying so fast in some places that it was making seed-bed preparation difficult.

As it turned out, most spring corn has been drilled into good seed-beds and emergence has been quick, with most crops up within seven to eight days. In fact, a lot of the March-sown spring corn now looks better than winter cereals that were drilled in February.

Winter wheat and barley have been slow to respond to nitrogen applications because of the lack of rain. Quite a lot of fertiliser sat on the ground for two to three weeks. I am sure some would have been lost if it was urea.

Some late-drilled crops have struggled and have not tillered as we would have hoped. These are now going to struggle in terms of yield. Last weekend’s rain would have helped all crops, but it may be too late to recover yield now.

Where winter crops missed their autumn residual for grassweed control, we now have a mixed bag and, driving around, there has certainly been some crops hit hard with Atlantis (iodosulfuron + mesosulfuron). None of mine, thankfully, but crops were very stressed and some have suffered. 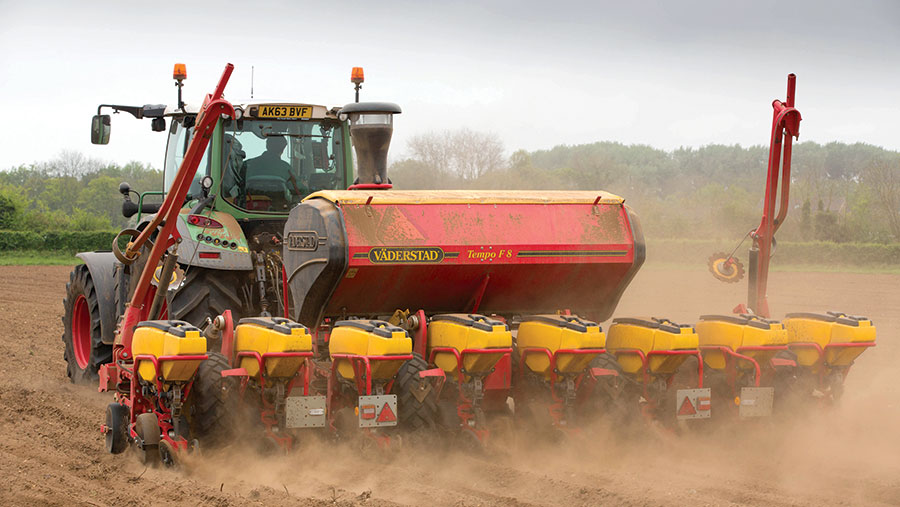 Dirty crops
There are certainly going to be some dirty crops around and I’m sure there are a few next to main roads that will lead to some comments.

The T0 on the best crops has now merged into T1, and I would expect most wheat crops to be sprayed this week, apart from the very backward ones.

The winter barley I have in the ground were all drilled quite early last autumn and are looking remarkably well, considering how wet their feet were all winter.

Maize drilling had started on one or two farms last week, but I would expect the drills to be going in earnest now. However, soil temperatures are only really just getting to where I would like them.

I want to see maize drilled and up within seven days, if possible, as it always does better than those drilled too early that sit in the ground for two to three weeks.

A pre-emergence will be applied to about 50% of the crops I look after and these will mainly be straight pendimethalin, although some will have half-rate Wing-P (dimethenamid + pendimethalin) applied with the pendimethalin on really weedy fields.

I find this works well and leaves some money in the pot to follow up early post emergence.