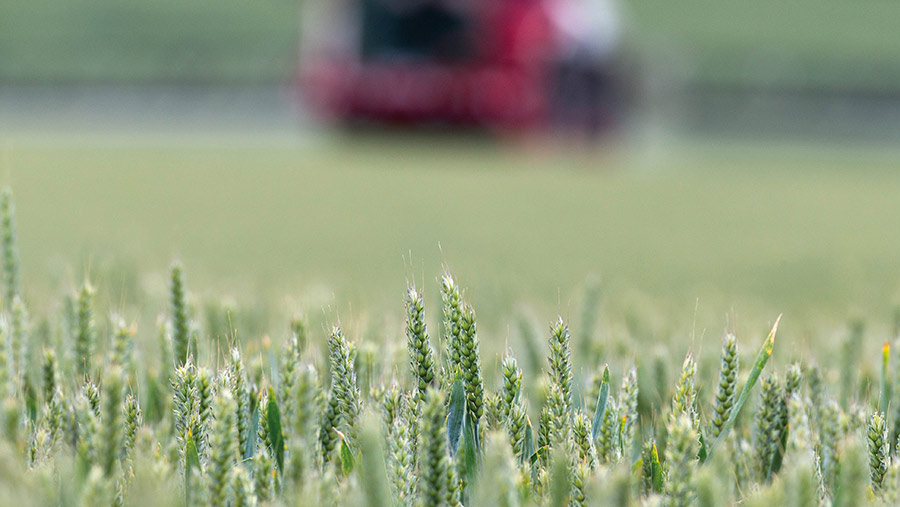 The priority in winter wheat and barley crops is to keep them green in the coming weeks, thereby maximising grain filling for those high yields. This may mean a rust top-up at the T3 spray in higher-risk situations, especially given the potential losses from a bad brown rust outbreak.

In the South West, rusts are also becoming more of a priority when choosing varieties, with the explosion in yellow rust in recent years leading to a change in thinking.

As we move well into June and another season slips by, it is time to reflect on lessons learned. I believe the first and most important is: never assume anything.

The current normal of abnormality quickly plays havoc with the most carefully laid plans. Wheat diseases are a case in point.

Septoria has always been the key wheat disease in the South West, but the explosion in yellow rust races in recent years has required a change in thinking.

Cold, dry early season weather meant that before yield forming leaves rust was the main target. The perils of getting this wrong were exemplified in one field where seed ran short so the farmer drilled the last few acres with Skyfall from the previous season. The remainder of the field in Extase was rust-free, demonstrating visibly how ineffective a fungicide programme with no T0 for a low septoria risk variety is against rust.

The arctic April conditions were replaced by the May monsoon. Soil moisture may have been replenished, but septoria risk soared, and disease can easily be found in spray misses.

Information filtering through from colleagues and trials indicates that even with new-generation fungicides, multisites (even without the best material, chlorothalonil) still play a very important role.

Providing lockdown restrictions allow, I am really looking forward to seeing trials in the flesh this year.

One benefit of the cold early spring has been the reduction in sightings of orange and lemon wheat blossom midge. Even if the pest was sighted no action would have been taken since pyrethroid treatments are only marginally effective and their effect on beneficials is much higher.

I wonder if the increases in lemon midge are nature’s response to more varieties being orange midge tolerant.

Over the next month farm visits will switch from crop walking to planning next season’s cropping. I suspect there will be a lot of mopping of fevered brows as growers come to terms with the alarming rise in nitrogen prices.

It’s all about preserving green leaf area now. We’ve done everything we can to set up some really great potential in our crops. While the lighter ground still needs some decent rain going forward, the heavy land probably has enough moisture to see most winter drillings through to harvest.

Other than late disease, the one thing that will really get in the way is another very hot, dry summer.

As expected, wheats have been catching up fast, moving rapidly through to ear emergence and, imminently, flowering in many cases. Two weeks ago, septoria was our main concern. But opting for the most curative new chemistry at T2 means we’re well covered here.

While wheat orange blossom midge is beginning to rear its ugly head, very rapid development looks like getting our earlier-sown wheats safely through to flowering before numbers reach any sort of threshold.

More worrying are the later drillings still only at full flag leaf. Because we don’t want to bring any T3s forward from their ideal early-mid flowering timing for fusarium, we won’t hesitate to put in an extra spray wherever we need to deal with this threat.

With the weather turning hotter and drier, we’re heartily glad we didn’t neglect rusts with our flag leaf spray. And not just on Crusoe either. We saw enough brown rust on Graham last season to make us very cautious this time round. And there are plenty of other varieties with decidedly lowly resistance ratings.

Add the fact that the new azole chemistry isn’t that great on brown rust and we’re looking well beyond fusarium for our fast-approaching T3s, adding pyraclostrobin or benzovindiflupyr to our prothioconazole mainstay wherever we have concerns. Late brown rust can rob an awful lot of green leaf area, cutting short grain fill in no time flat.

Green leaf area preservation is also our main priority as we get our spring barley T2s on, with brown rust a particular target too – alongside rhynchosporium, of course.

Drillings from mid-February right through to the end of March mean a wide range of crop development.

Although further ahead, the earlier sowings definitely lost a lot more tillers in the dry April. This means the later-sown crops are looking more promising at the moment. But they have a lot further to go, so the jury is firmly out.

Our OSR continues to be exciting despite a surprisingly extended flowering that leaves us doubtful we’ll be harvesting much, if any, before August.

As this means such a long gap from mid-flowering, we’ve taken the unusual step of going in with a late-flowering spray of azoxystrobin and cyproconazole on our best crops to prevent alternaria and botrytis compromising green leaf area as humidity builds in the canopy.

This, and the extra magnesium and boron we also applied, is more than justified by crop potential and prices. It should stand us in particularly good pod fill stead in any dry spell, helping avoid the disappointment of another very small-seeded harvest.

The countryside has burst into life over the past month and winter cereals are all now out in ear, with winter barleys in late flowering stages. As T3 fungicides are being applied in winter wheat, in general the gates are now being shut until harvest time.

There are some tall barley crops around the county and any heavy storms will be a concern for some crops. However, as shown at our trials site which has plots with and without a fungicide and plant growth regulator programme, an appropriate programme has helped significantly thicken straw, making them much more resilient to lodging pressure without big reductions in straw yield.

Our trial site is showing some huge difference in disease levels between varieties this year, with an unusual amount of yellow rust for our region showing in our wheat plots.

Spring barleys are now motoring through the growth stages with crops varying from early tillering to flag leaf fully emerged. In most situations weed control has been applied alongside the T1 fungicide and plant growth regulator, which has now been applied on most spring cereals, except a very few late-drilled crops.

As is typical for the region, rhynchosporium is now present in spring barley, and prothioconazole has been the base of my fungicide choices in the crop, alongside an SDHI in higher-risk situations, such as on less resistant varieties or early drilled crops with high biomass.

Maize is now through the film after a slow start due to a cold spring season, and any post-emergence herbicides required are being applied and the recent warmer weather and sunlight is starting to degrade the film more quickly.

It won’t be long till we’re getting combines out of the shed and bringing in our 2021 harvest – so I wish you all a good harvest-time and pray for kind weather.

Warmer weather has brought aphids into crops. They are easy to find in peas, and it is only a matter of time before I find them in sugar beet (by the time you read this, aphids will probably have exceeded threshold).

However, predators are also abundant. I’ve been seeing lots of ladybirds, solider beetles and spiders while walking out and about. It is important to wait until thresholds are met, both to reduce the number of insecticide applications required, but also to protect our predators and allow them to do their job. The number of predators living in my winter wheat crops will, hopefully, keep late aphids at bay, as they do most years.

The increase in heat and sunshine has led to crops racing through growth stages. I don’t think I’ve ever seen sugar beet grow so rapidly! With beet closing over the row, make sure any last-minute herbicide applications are applied in a timely manner, or hoeing is completed without delay.

With the advancing growth, keep an eye out for nutrient deficiencies. I’ve spotted several beet crops requiring a manganese application.

With harvest just around the corner, the all-too-familiar blackgrass is beginning to appear above cereal crops. Blackgrass control is one of the biggest challenges we currently face.

The resilient nature of this grassweed, together with the compounded effects of two extremely wet autumns, makes going back to basics and ensuring land is well drained is of paramount importance, to allow later drilling to be carried out in good conditions.

A well-drained field will allow timely, and effective, application of residual herbicides in the next crop going forward.

Here in Suffolk, some useful rains (although we could do with a few more showers) have been alleviating the soil moisture deficit we witnessed earlier in the spring.

There is still moisture at depth, and it currently looks as though it will be one of the best years for mole draining we have seen for some time. Conditions are near perfect for carrying out this important, but often overlooked, operation post-harvest.