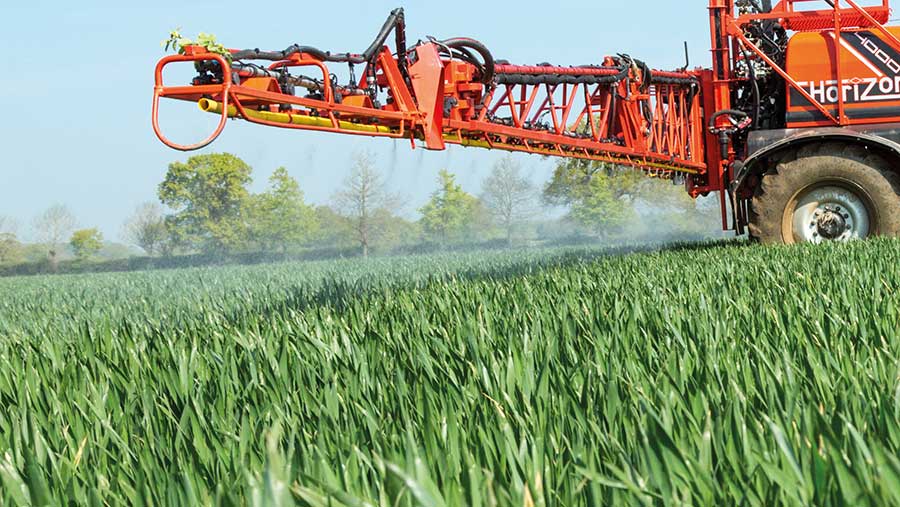 Crops are responding to the wet May and are moving on, but its warmth that is needed now to help maximise yields. Especially for maize.

One notable feature being reported by our agronomists is the shortness of winter barley and winter bean crops. Short barley crops could have implications for livestock farmers.

We round up the situation around the country with our Crop Watch team.

Crops have responded to the rain and now look verdant; with appropriate inputs they should be on track to reach their individual potential.

Spring crops are racing through their early growth stages, making well-timed treatments a challenge, especially while the weather remains unsettled and often windy. Weeds continue to germinate, but herbicides will be more effective in moist, warm conditions.

Winter wheat growth stages vary according to drilling date and even December-drilled crops now have their flag leaves emerging. Recent rains have moved the focus on to septoria control, with T2 fungicide sprays being tailored according to variety disease profiles and time of sowing.

There is comfort where previous applications appropriate for the rust and septoria disease rating were applied. T1 treatments have provided protection of final Leaf two and three and now well-timed flag leaf sprays will continue to protect the upper canopy. We wait to see how well our programmes hold disease development following the rain and warmer temperatures.

Winter barley crops have also improved dramatically after difficult conditions in early spring and are now coming into ear. These are receiving a final fungicide including an SDHI + azole with folpet for improved ramularia control.

Winter beans are a mixed bag. Most are quite short and some will be dirty with weeds when these have emerged after the latest safe application timing for weed control (buds visible). This winter crop has recently received a fungicide mix with foliar nutrition.

In sugar beet, a slow start in cold and dry conditions has resulted in a range of growth stages but with recent moisture most crops are now well established and evening up. Since the rain, early herbicide applications are working well.

However, in these conditions well-timed later sprays are important as weeds continue to flush and grow quickly.

Compared with last season, early spray timings have been relatively easy as they have not been interrupted by urgent aphid sprays, although aphid pressure is on the increase.

Treatment threshold is one wingless aphid to four plants up to the 12-leaf stage of the beet. Plan the spray strategy to leave safe intervals between broad-leaved weed, aphid and grassweed treatments.

In spring cereals, act quickly to make sure that herbicide and PGR treatments are applied before the safe cut-off date. These crops are also now receiving fungicide treatments and additional nutrition. Be wary of complex mixes in such circumstances.

“Be careful what you wish for” is a wise saying – and looking back at my last entry, I should have known better. We certainly have had the showers requested. I have recorded more than 100mm in the first three weeks of May.

I was certainly relieved that I had not reduced my T1 fungicide input covering both septoria and eyespot despite the dry April conditions. They were generally applied ahead of the rainfall in early May so were applied in a protectant situation.

We know in my region that septoria is ubiquitous and that rain is the conduit for its development within the crop, especially as leaf emergence has been unusually slow.

In most seasons, despite the previous weather and sowing date you can expect flag leaves to emerge around 16-20 May. But most crops were inspected that week and flag leaves were generally only halfway emerged. Never have I known flag leaves to creep rather than romp out.

So, with the numerous recent rain splash events on slowly exposed leaves, this has made T2 fungicide decisions easier. The best chemistry will be required to ensure these crops fulfil their potential.

Product choice will be based around mefentrifluconazole, but I will take a look at the new Inatreq (fenpicoxamid) offering on a few farms to assess how it performs in the field.

Some crops will also require some late growth regulation after luxuriant uptake of fertiliser applied in the dry April. The expected flush of weed emergence has not been as bad as expected but some will require a late-season tidy up.

Barley crops are still looking relatively short. In a mixed farming area this is not always a welcomed attribute. But as the weather made late growth regulator applications difficult to achieve with ears emerging before we had a spray window, so I opted for foliar potassium and a robust SDHI fungicide to try to mitigate against brackling.

But there will be some nervous field visits over the coming weeks to see if this was enough. I am optimistic about yield potential as crops are well tillered. The unknown will be the impact of the April frosts on blind sites.

Oilseed rape crops seem to have been flowering for weeks, but even those crops which were thin from either cabbage stem flea beetle larvae or through lack of fertiliser uptake have filled out and are now thick with flowers.

Despite the low sclerotinia risk I decided to apply a protectant fungicide to most. We have had petal stick, although with lower soil temperatures, infection levels have been on the low side. So I will rely on a single spray.

OSR in my opinion is impossible to predict yield for. It’s powers of recovery test your resolve, but only the combine will be the judge of success. However, with the current high crop values it is a break crop we will stick with despite the angst it can cause to growers and agronomists.

Spring cereals needed the moisture and are now growing away well, as are the weeds, so herbicides will be first action for these, combined with or closely followed by a plant growth regulator.

Maize crops also needed the moisture, but they are more desperate for some warmth, as they are emerging looking pretty pale. Time will tell if the pre-emergence herbicides we applied, in many cases in the hope of rainfall, have been washed down the profile so that efficacy is compromised.

In the past four weeks we have had a Scottish election that turned out to be a non-event, and rain which was a game-changing event. It even managed to be the right sort of rain, falling gently and steadily for the most part, giving the countryside a much-needed soaking.

All crops have responded well to the moisture, but we are badly missing some warmth. By my estimate crops are a week behind last year, which at this point was still in a drought.

The most forward wheats have the flag leaves just appearing, although in most of my crops it is still leaf two that is emerging.

T2 sprays are going to be a bit of a mix this year with the Revysol (mefentrifluconazole) options where rust is never much of an issue, and Elatus Era (benzovindiflupyr + prothioconazole) where I am less confident of a rust-free crop, due to variety or site. Most wheats are looking pretty good now, which is a pleasure.

Spring barleys have also benefited from the conditions and are well-tillered and approaching growth stage 30. The ground cover is really impressive this season which is a welcome change from last year.

Although they are completely disease-free at present, I feel the weather is in an unsettled phase so they will get two fungicides to protect against rhynchosporium – one at growth stage 30-31 and the second at flag leaf.

The challenge will be keeping ramularia at bay without chlorothalonil, so a return to dry weather would be ideal. The gate is shut on winter barley, the heads are out and this is the crop that really needs sunshine now to fill the grains.

OSR crops are past mid-flower and are very variable – some look fantastic and others are patchy and flowered very unevenly. However, it is a crop where appearances are deceptive and we will have to wait until harvest to know what they are really like.

It never rains, but it pours. However, it has transformed both winter and spring cereals.

Most winter wheats have long seen their T1 or T1.5 fungicide where needed and are anxiously waiting, weather permitting, the T2 fungicide of fluxapyroxad and mefentrifluconazole plus a late-season plant growth regulator where the flag leaf is fully emerged. These will be applied as soon as the weather allows.

Both septoria and lodging pressure have gone from quite low to quite high. While broad-leaved weeds are emerging strongly after the recent rains, with crops being checked and an appropriate herbicide being applied, now or at the T2 timing.

Winter barley is at growth stage 55 and, given the changeable weather, will be receiving an ear spray shortly.

In most winter oilseed rape fields, pods are setting well over what has been a more prolonged flowering period than usual. Where three weeks have passed since the last fungicide application, a second flowering fungicide has been applied of generally tebuconazole and azoxystrobin.

Winter beans are now flowering and have received a similar mixture of tebuconazole and azoxystrobin when the rain showers have allowed, mainly to control chocolate spot at this stage. 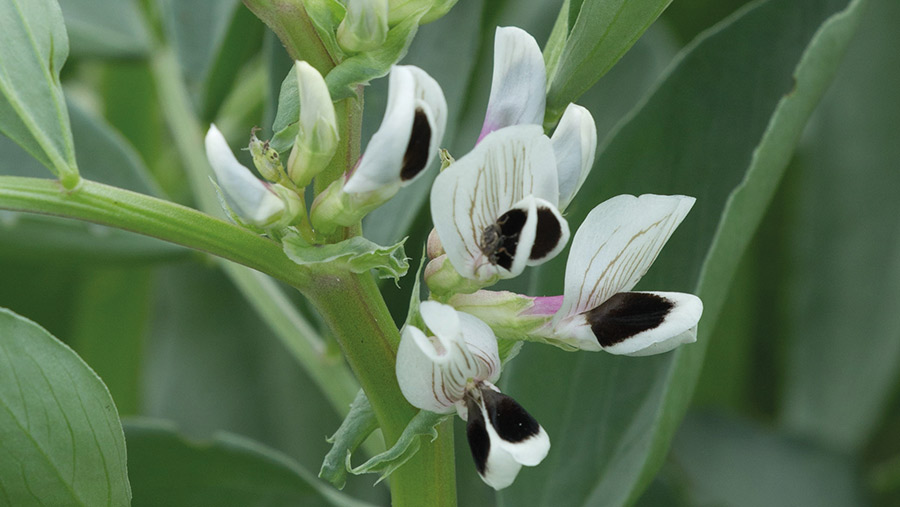 Spring linseed has received its last nitrogen fertiliser application, as have most other spring crops too. Spring peas and beans are still suffering from weevil damage and now growing away from any damage.

Broad-leaved weeds have started to emerge and will soon receive a post-emergence herbicide of bentazone. Where volunteer cereals and grassweeds are a problem, this will be followed by an application of fluazifop-p-butyl.

Spring barley is tillering well and certainly moving through its growth stages quickly now. Some crops are about to receive their T1 fungicide, alongside an appropriate herbicide if this has not already been applied.