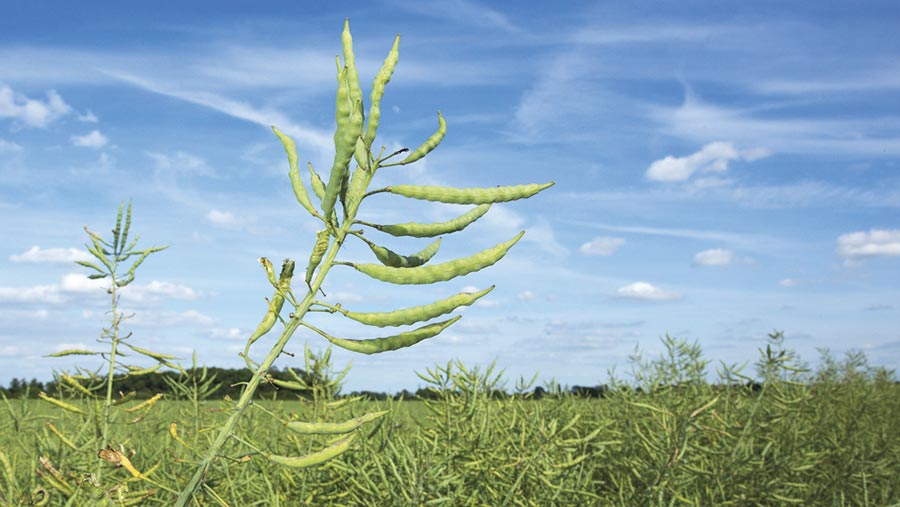 Spray applications are drawing to a close, with our agronomists highlighting aphid control and oilseed rape pod sealants as remaining factors for consideration.

While orange blossom midge did not significantly trouble northern crops, Patrick Stephenson says resistant varieties will have to replace sprays in the future to help protect beneficial insects.

With thoughts already turning to variety choices next season, Kevin Knight gives his lowdown on the top performers in the South.

Marcus Mann reminds milling wheat growers to get a leaf tissue test done to check crop nitrogen levels, as late rains will have caused yield dilution in some crops.

As crop growth starts to motor, maize growers still have a list of jobs to do, warns Giles Simpson, with weeds, pests and diseases all needing to be dealt with.

Crops have moved through the growth stages like an express train. Spring barley seemed to be moving slowly, but then moved from tillering to ear emerged within 10 days.

I think spring barley crops will be a mixed bag, as establishment varied according to soil type and drilling date. This could be a real test for the heavy land fields, reflecting the potential risk of spring cropping.

Low-rate prothioconazole-based fungicides are now being applied to the ears, completing the spray programme.

Winter wheat crops also raced through from flag leaf to ear emergence, bringing a real dilemma to when and what to apply at ear emergence.

The much-needed rain certainly triggered a fusarium risk period, but with the difficulty of controlling the disease with any product or timing, I plumped for slightly later application of appropriate azoles.

Mildew has flourished this season and the stressed crops bring back memories of older varieties. Siskin with its good disease resistance ratings has shown how this can be used to help reduce input costs and risk while maintaining yield.

With more varieties with good disease ratings now being added to the Recommended List, this could really provide the opportunity to kick our fungicide addiction.

Aphids have been an interesting challenge. Early drilled wheat has been the most infected, with several fields heavily colonised.

I cannot remember the last time I sprayed for aphids, but some of these fields have had sufficient numbers to justify treatment.

The loss of pirimicarb means there is no respite for beneficals, so I am very reluctant to spray. Fortunately, the majority of fields are well below threshold and the recent weather should help stall further development.

Orange blossom midge did rear its head, but fortunately not at significant levels. However, future plans will have to include midge-resistant varieties. Black bean aphids are arriving and will be monitored. Fortunately pirimicarb is still cleared.

Winter beans have all received the first chocolate spot spray and the spring beans will be due a disease spray shortly.

Peas and beans are in flower and aphid numbers have been building. We now only have one application of pirimicarb (relatively bee safe) to control these. Timing will be key to get the best results.

Peak migration of bean aphid starts tailing off in the second week of June. If you can hold your nerve until this point – provided thresholds are not reached –  you stand a better chance of successful control.

Despite blossom midge being found in traps and cobwebs, winter wheat ear emergence has been so fast, it seems to have had little effect.

T3 timings have been as and when spray windows occur, and have been based on half-rate azoles, with the addition of thiophanate methyl where potential is good and disease risk is higher.

The new generation of oilseed rape pod sealants are far more user-friendly than the early “glues,” and they certainly do give a yield uplift.

Some go for two passes – an early application and a second with the desiccant. Most opt to mix it with desiccants and apply when pods are still green and flexible.

Either approach seems to pay for itself in terms of seed in the barn. Having used it on beans last season to good effect, I will be recommending it more widely this year.

With variety trials on the agenda while we pause for breath, it is worth considering which have performed well this season in terms of establishment vigour, suitability to soil types, resilience to stress (drought, waterlogging) and agronomics, including disease resistance.

Skyfall and Crusoe remain my preferred Group 1 wheats for their agronomics and consistent performance, though I wouldn’t want too large a proportion of Skyfall, as it needs priority at harvest.

The ears tend to open and let a lot of weather in, which can lead to a loss in quality. I have been particularly impressed with Siskin as a Group 2 this year – clean, green and standing well.

Basset seems a good successor to Claire in our local Group 3 markets, though I think Zulu may still have the edge provided you keep on top of yellow rust.

Wizzard winter beans and Boxer spring beans have both done well, particularly on some of the more marginal chalk downlands and sandy soils.

Most crops have responded positively to the rain in May, recovering well from drought stress. All we need now is some decent, bright weather throughout June and July to help build yield.

First wheats in particular are looking much healthier after taking up nitrogen, which should certainly now help fill all the grain sites.

Spring crops have also pulled together much better, even if in some instances we now have crops such as linseed and sugar beet at very different growth stages.

Interestingly, the winter barleys in the light land hotspots are showing differences, with the conventional two-row barleys appearing to be stunted more than the hybrids this year, suggesting the Hyvido varieties may express an element of drought tolerance.

Cereal disease pressure has increased lately, particularly mildew, which can be found in almost all varieties and was taken into consideration when planning the T3. Brown rust is also becoming apparent in susceptible varieties, particularly Crusoe.

The rain could also significantly increase the risk of fusarium and microdochium, so make sure the T3 is timed with early flowering of the crop, as we are reliant on protectant fungicide activity with these diseases.

Now is the time to check for nitrogen levels within the crop through leaf tissue analysis. The late rains will have helped further nitrogen uptake, but this can also create yield dilution. If aspiring for 13% protein, a foliar ear application maybe necessary.

Blackgrass seeds will soon be shedding, so ensure even low populations are removed, as one plant can return up to 2,000 seeds to the soil.

Winter oilseed rape is beginning to reach full pod development and sealant applications will start soon. Applied when the pods are still green and “plastic”, they provide an increased level of protection and insurance.

In taller crops, going through with the sprayer now also lays down the tramlines, which minimises sprayer loss when travelling through later on with the glyphosate for desiccation.

They have increased to high levels and pirimicarb applications have been made. Pea moth pressure still remains low. Continue to monitor PGRO updates and inspect sticky traps in fields.

After a few weeks of high winds and rain, the sprayers are now playing catch-up. On some fields T2 was delayed and have only just been done in the past week, so they have become the T3 as well.

In general all the winter crops look extremely well. The earlier dry weather kept septoria in the wheat at bay, although some varieties were showing signs of yellow rust. However, good, robust programmes and timings have paid off.

T3 sprays are now being applied to winter cropping, although some destined for wholecrop may not be done, as they are clean and possibly only three to four weeks from harvest.

The spring crops have now mainly recovered, but I fear yield will have been affected. Growth stages across some fields of barley vary immensely, from tillering to awns visible.

This is making decisions interesting. I am basing my decisions on the growth stage that makes up the largest area of the field.

Harvest is going to be interesting and I can see lots of patches of fields being cut and leaving other patches, delaying harvest.

Maize gets off to good start

The maize got off to a very good start and I am pleased with the pre-emergence herbicide applications – these fields are very clean and have low weed competition.

The fields that were not sprayed have lots of weeds that now need tackling. With most chemical on farm, I hope these are given priority so yield is not affected further.

I have seen lots of leatherjacket in maize, which is a problem with no solution. There has also been a lot of slug damage that had to be dealt with, some fields needing more than one application.

This is always a contentious one and persuading farmers to do this is not easy, but even in the absence of the disease there is a yield benefit to be had.

We are now deciding about next year’s cropping and will be taking time to look at many trials over the next few weeks.

We have our trials open day on 30 June, so if you are a grower in the South or South West, please come along and have a look.