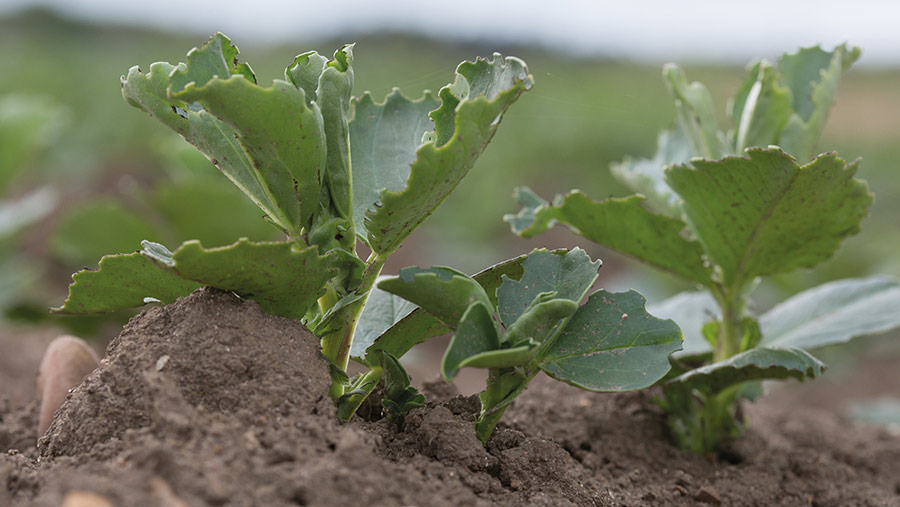 Seed weevil pressure is high this season and, coupled with dry conditions, means some spring bean and pea crops are struggling to get away.

Dry conditions are affecting spring crops, especially sugar beet which is seeing patchy emergence. One concern is that when it it does turn wet, the nitrogen being washed in will result in a growth spurt, so further growth regulator applications may be needed.

Another April with very little rain and moisture-sapping easterlies. Thankfully, it’s not as cold as last year, and our winter crops are in a better place following a kinder autumn.

Our biggest concerns just now are spring crops. With moisture preservation our key establishment priority, most have come through well. Without a decent drink soon, though, their potential will rapidly evaporate.

Winter wheat disease pressures have stayed low enough for us to stick with trusted bixafen + prothioconazole co-formulations at T1 – supported by strobilurin for extra rust activity where needed. This saves the big guns of new chemistry for T2 to tackle the septoria that will take off like a rocket once we get the rain – as recent experience suggests we surely will in May.

As well as providing the disease management platform we need for T2, our focus has been on getting as much physiological benefit as we can from our T1 chemistry in nitrogen use efficiency and drought tolerance, in particular.

With every tissue test showing low crop levels, we have included foliar magnesium across the board here too, alongside the balance of our main plant growth regulator programme and a good broad-leaved weed tidy-up.

Our low temperature-active chlormequat at T0 has worked well. Even so, we are not ruling out going back with extra growth regulation at T2.

After all, there’s a lot of nitrogen waiting to be taken up, especially by Group 1 wheats. And, well-rooted as they are, they could easily go “whoosh” in another wet May.

Sadly, this spring certainly hasn’t favoured OSR crops bouncing back from pigeon damage. So much so, that we are fast losing hope for badly affected areas.

Having said that, we also have some of the best potential crops we’ve seen for the past three years. And, with harvest values comfortably above £720/t before bonuses, we won’t be holding back on trying to make the most of them.

We can’t do anything about rainfall or sunshine hours. But, as rooting certainly isn’t an issue, we are looking to remove as many limitations to the disappointing seed fill that has been our biggest bugbear in recent seasons.

This includes bearing down robustly on more seed weevils than we’ve seen for many years; following-up our main fluopyram + prothioconazole mid-flowering spray with a further azoxystrobin-based treatment to maximise green leaf area retention and alternaria control; and considering late foliar N – despite its cost.

With the exception of late drillings on heavy ground, our spring barleys are still looking pretty good, having had all their nitrogen, together with early chlormequat and phosphite, manganese and magnesium to encourage tillering and rooting.

Despite good seed-beds and as much nutritional support as we can give them, some spring beans and peas are struggling, though. They just can’t grow away from very heavy weevil pressures, and there’s little early May rain in the forecast to help.

Alongside massive cost inflation, serious supply headaches aren’t helping either, reinforcing the fact that, in our world at least, relationships still really matter.

Final leaf three fungicides were applied to most wheat crops towards the end of last week after a long dry spell. The adage “Treat for the three weeks ahead rather than the weeks just passed” proved apposite, as showery rain arrived on Sunday.

Later crops drilled after maize or grass will be at leaf three and ready for fungicide next week. Most crops have had an SDHI plus azole product. Later sown crops with good disease resistance will receive an azole-based input.

Yellow rust has required scrutiny, and any variety with poor or moderate resistance has required an additional fast-moving azole such as tebuconazole for eradication, or rust active strobilurin as a protectant. Epoxiconazole is sorely missed in the rust situation – when it was a standard application for septoria we rarely saw yellow rust.

Wheats look full of potential, and it doesn’t take a wise man to say they are worth looking after. Herbicide applications are virtually complete, unless cleavers stage a late rally in which case fluroxypyr may be needed at flag leaf. Any remaining wild oats were dealt with in the leaf three fungicide.

Winter barley is pushing on towards ear emergence. The requirement to treat at flag leaf for ramularia means many varieties will require an early ear emergence spray, which is likely to be a low dose of prothioconazole. A strobilurin will be added where brown rust is a particular issue.

The gate will not be closing on winter barley fields for a little while yet.

Spring barley is approaching tillering and will have benefited from the weekend’s rain. Spring bean establishment is exceptional.

Winter beans are flowering strongly. They require significant rain during the growing season if they are to perform well, unless they are on the most moisture-retentive silty or clay soils. Fungicide programmes will be based on benzovindiflupyr coformulations at early flowering.

The agronomist’s manic month of April is now behind us. As we move into May there is much to play for. Crop management is like building a house: foundations are vital, but the job isn’t complete until the last ridge tile is in place.

Spring has well and truly kicked off in the east and most of the T1 recommendations for winter wheat are on farm.

The programme for susceptible eyespot varieties is based around bixafen + prothioconazole. Fungicide choice for varieties that suffer from rust, in particular Group 1s, is constructed around Solatenol (benzovindiflupyr).

Walking the crops, septoria is present in every variety at differing degrees, so the addition of a multisite, for example folpet, will aid protection from further spread while also forming part of the resistance management strategy required.

Moisture is becoming very sparse now, with beet crops suffering the most. Emergence is very patchy across fields, making it difficult to apply early herbicides.

Where plants are at expanded cotyledons a mixture of ethofumesate + phenmedipham + metamitron is being applied to get on top of any early weeds.

It has also become apparent that skylarks and other birds are enjoying the sweet taste of beet too, alongside the mice, with many crops having rows bitten off, causing the plants added stress in what is already a difficult start to the season. Reports of aphids are now coming out as well, although personally I’ve yet to see any.

Early drilled spring barley on lighter land is now being walked for any weeds. Although herbicides are being applied before the crop closes over, the lack of rain does create nerves as to whether a flush will come later in the season. But, with growth stage cut-offs and targets becoming increasingly difficult to hit, we are left little option but to apply for what we see in the crop at present.

Talking of barley, winter barleys have now been reported to be reaching paint brush stage in north Norfolk, with the crops further south not far behind. Maintaining the health of all the leaves as well as the awns is vital for grain development.

It is reported that the awns themselves actually make up about 11% of the total green area for the crop. As well as the diseases found at T1, ramularia will also become more apparent later in the crop and, similarly to wheat, a multisite should be recommended. 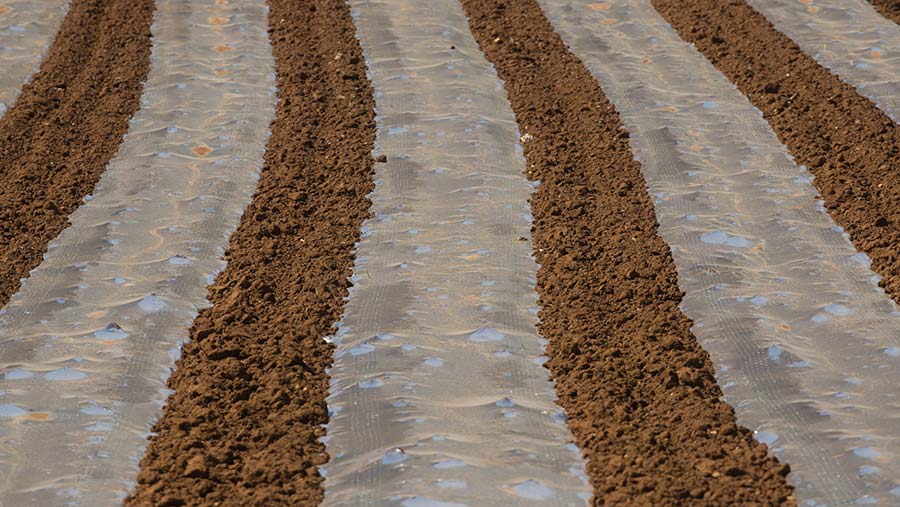 As I write this, rain is falling in Cumbria which will be a relief to those on drier land where crops and grass were slowing down due to lack of moisture.

Winter wheats are now well into stem extension around GS 32 and winter barleys have raced through the growth stages in recent weeks, now currently ranging between GS 37 and flag leaf fully emerged and extended.

Yellow rust, although less common in our western region, is present in specific varieties. However, in general where crops have received a robust fungicide programme yellow rust has been controlled well.

To distinguish between the two, ramularia would have a yellow margin of chlorosis and show right through the leaf, whereas physiological leaf spots cause superficial browning on the upper leaf surface and the undersides tend to remain unaffected.

Maize drilling is well under way, with most crops under film now drilled. There is a lot of maize going in this year in Cumbria due to high fertiliser prices. Maize offers a good opportunity to make use of organic manures and produce high quality forage with little inorganic fertiliser.

Pre-emergence sprays for crops under plastic have been based on full rate Wing-P (pendimethalin + dimethenamid).

Silage has begun for those on multi-cut systems. Grass growth had begun to stall for some farms over the past few weeks, with little rain and cooler temperatures. However, for those on multicut systems it is important to take the early cut, as metabolisable energy will reduce rapidly and taking first cut now will give a good quality silage and set the grass up for a bumper second cut.