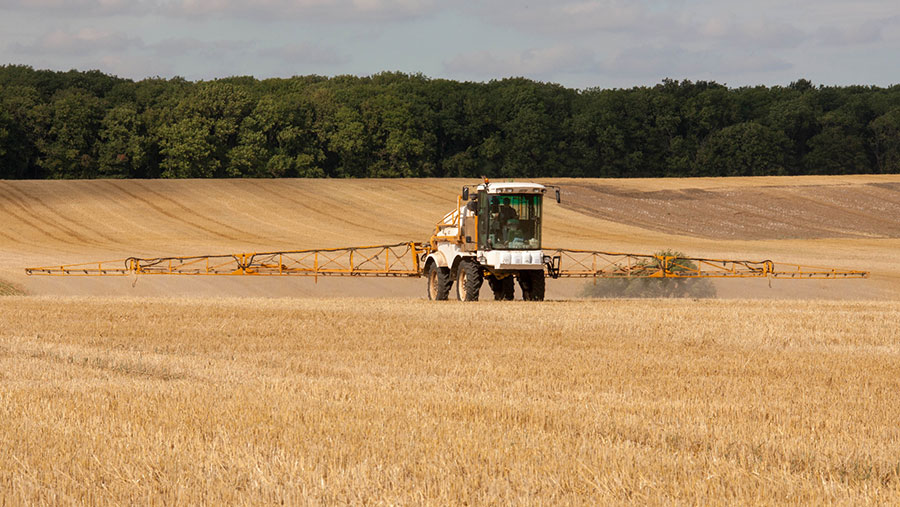 Fresh doubt has been cast over the future of glyphosate use in the EU after member states failed to agree a proposal to renew its licence.

The Standing Committee on Plant Animal Food and Feed (Scopaff) met on Thursday (9 November) to discuss a European Commission proposal to renew the licence of the active substance.

According to a spokesman for the commission, following the exchange of views between representatives for the 28 member states, the proposal for a five-year reauthorisation was put to a vote.

However, a qualified majority could not be reached – either in favour or against the proposal – so the result of the vote was returned as “no opinion”.

This is despite half of the member states – 14 – voting in favour of the commission’s proposal.

NFU vice-president Guy Smith said: “I’m sure most farmers like me are frustrated, if not infuriated that such a key, safe and environmentally advantageous crop production tool such as glyphosate is becoming an overused Brussels football.

“Now it would seem it’s going to the appeals committee which will at least take it beyond the ever procrastinating Scopaff committee. We repeat our call to the commission to grasp this nettle and follow the advice they have from their official safety agencies by reauthorising glyphosate for the full 15 years.”

The current authorisation for glyphosate in the EU is due to expire on 15 December.

A spokesman for the commission said it will now submit the proposal to the appeal committee by the end of November. “This important matter has been discussed several times by the College of Commissioners, most recently on 8 November,” he added.

The 14 countries that voted in favour of the proposal (representing 36.95% of the vote) were: the UK, the Czech Republic, Denmark, Ireland, Spain, Hungary, The Netherlands, Slovenia, Slovakia, Finland, Estonia, Latvia, Sweden and Lithuania.

Nine countries voted against the proposal (representing 32.26% of the vote). These were Belgium, France, Croatia, Greece, Italy, Cyprus, Luxembourg, Malta and Austria.

The European Commission initially proposed a 10-year reauthorisation of glyphosate. But the proposal failed to gain enough support from member states to vote on last month.

It then came back with a reduced five-year proposal which commentators believed may possibly have been supported by countries resistant to a reapproval, such as France and Italy.

The “no opinion” vote on Thursday will raise serious concerns in the agricultural sector. If the EU does not use its powers to reauthorise glyphosate, member states will have to begin withdrawing the plant protection products, which contain glyphosate from the market.

Green groups have been calling for an outright ban after the World Health Organization’s International Agency for Research on Cancer (IARC) suggested in March 2015 glyphosate was “probably carcinogenic to humans”.

But Europe’s food safety watchdog, the European Food Safety Authority (Efsa), which advises EU policymakers, and the European Chemicals Agency (ECHA) have both concluded that glyphosate is safe to use.

Sarah Mukherjee, chief executive of the UK Crop Protection Association (CPA) added: “It is disappointing that some member states are continuing to politicise glyphosate, publicly blocking the reauthorisation whilst privately urging the commission to reapprove.

“They are ignoring the science and therefore risking the livelihoods of European farmers and the continued availability of safe, healthy, affordable food for consumers.

“We urge the commission to now take action and grant the standard 15-year licence. Anything less undermines the work of independent, expert regulators at Efsa and ECHA who all agree glyphosate is safe. The loss of glyphosate risks significant damage to the economy, the environment and the agricultural sector in Europe.”