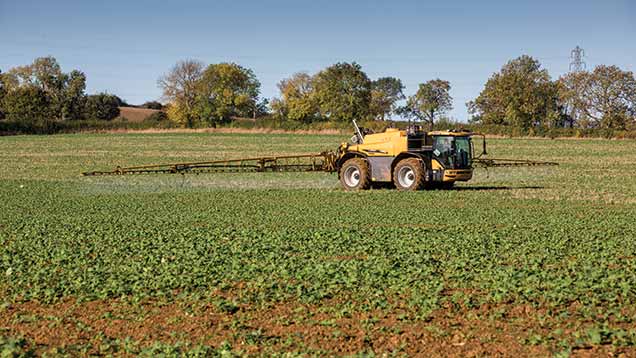 Cutting back on fungicide use is a distinct possibility in winter oilseed rape this autumn, enabling farmers to make savings in the cost of growing the crop, believes one crop specialist.

Better disease resistance in varieties, together with the use of cultural factors that encourage rapid early growth, could help to reduce the need for autumn spraying, especially where phoma is concerned, says David Leaper of Agrii.

“Things that help to give bigger plants in the autumn make it more work for any phoma infection to travel across the leaf and down into the stem,” he explains.

“Remember that it isn’t the leaf lesions that cause the yield loss with this disease – it’s the cankers that form once it gets into the stem and blocks the vascular tissue.”

The oldest leaves with phoma lesions on tend to die off without causing any damage, he adds. “The crops most at risk from the disease are those that are slow to develop, or remain small going into the winter.

“That is because the time taken for the infection to move from the leaf via the petiole to the stem is less with smaller plants.”

Cultural methods that are now widely adopted by professional rape growers include the use of lower seed rates, autumn fertiliser applications, more vigorous varieties and better establishment techniques, most of which help to get crops up and away quickly, he says.

Rothamsted Research issues regional forecasts for both phoma and light leaf spot, with the first information expected this October.

The phoma forecast shows when we expect 10% of oilseed rape plants to show symptoms, while the light leaf spot service is then updated in the spring.

“There has been a focus on establishment and all of these factors have an influence on plant size and tend to produce larger plants and big canopies. That wasn’t the case some 10-15 years ago, when crops were slower to get going and the disease was causing serious problems.”

Added to this, better phoma resistance is a feature of many of the newer winter oilseed rape varieties on the Recommended List, notes Mr Leaper.

“Several breeders have introduced very good, lasting phoma resistance. Crops are more protected now, so the pressure on them is less.”

This combination means the need for the first autumn fungicide spray is not as strong as it was, he suggests. “There is an argument for saving some money and holding off. We could be reducing autumn spraying from two or three sprays to just one this year, hitting both phoma and light leaf spot with the same application.”

The accepted threshold for spraying is when 10-20% of plants are infected with phoma and showing symptoms, he adds.

“That is the same for all varieties. The difference is that those varieties that are more resistant don’t tend to reach the threshold.”

There is a good choice of fungicides for phoma, although products with growth-regulation activity (tebuconazole, metconazole) may be favoured where plants are large and reach six leaves by early October.

Light leaf spot is now the bigger disease, regardless of where you farm, he says. “It seems to have come in and taken the place phoma used to have. And it affects the South just as much as the North now.”

Last year was considered to be very high risk and the disease was building up in November and December, he recalls. “But we got lucky. There was a cold period at the end of January and into February when the diseased leaves died off, followed by a spring drought.

“So the conditions worked in our favour and helped to keep light leaf spot levels down.”

Until three years ago, the varietal resistance standards for light leaf spot were set by Cuillin, which had a yield lag, recalls Mr Leaper. “Now we have leading conventional and hybrid varieties with 7s for the disease and candidate varieties with 8s. The breeders have come a long way.”

There is no doubt the varieties that have performed best this harvest have had good disease resistance, he adds. “Having plenty of light leaf spot around in the past few years has helped with variety selection – the more resistant types have produced better yields.”

Good control of light leaf spot is more difficult to achieve with fungicides, so spray timing is critical.

“There tends to be a need for a November spray on high-risk sites, with crops then being inspected from January onwards. Spraying should take place as soon as the disease is found – there aren’t any thresholds prior to stem extension.”

Of course, the autumn phoma spray may have given adequate light leaf spot control, he acknowledges. “That is one of the reasons why the more resistant varieties may allow you to save a pass – there is more leeway with spray timings.”

Light leaf spot incidence was lower in 2015 than the previous year – when it reached unprecedented levels – but remained above the long-term averages (2004-13), according to the latest survey results from Crop Monitor.

Despite being lower than in 2014, the disease affected 77% of crops and 23% of plants this summer and was recorded in all regions of the survey. The South West had the highest incidence of light leaf spot, while the East had the lowest levels.

In comparison, the long term average is 40% of crops and 13% of plants affected.

Phoma canker was found in 84% of crops, which was slightly higher than the previous season, when 80% of crops were affected.

Disease levels within crops were the same as last year, with canker incidence being unchanged compared to the long-term mean.

Otherwise, levels of powdery mildew on the pods were markedly lower than the previous year, while sclerotinia affected just 1% of crops and 0.04% of stems.

Verticillium wilt was reported for the fifth year in the survey and was the lowest incidence of the disease seen so far, with just 6% of crops affected. Within crops, 1% of stems were affected by the disease.