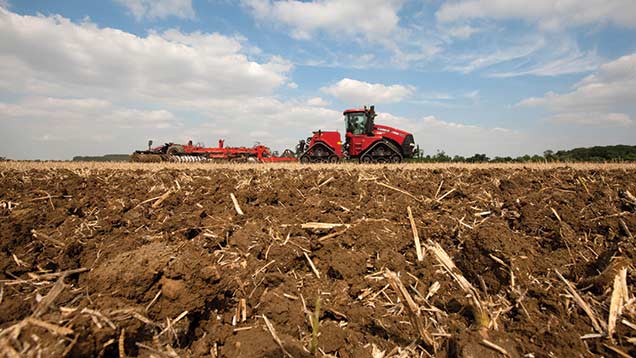 Whether you have recently acquired land or farmed it for generations, identifying and correcting any soil problems is key to crop health and achieving high yields.

The problem arises because it is not always possible to undertake fieldwork in perfect conditions, as many have found during this summer’s frustrating harvest. Add the effects of ever-larger tractors and equipment, and some damage to soil is virtually unavoidable.

Remedial action, in the form of light cultivation, ploughing or deep subsoiling, can be taken, but it is costly, warns independent soil and cultivation adviser Philip Wright.

Sometimes it is best to let nature do the work for you. But how do you decide when to act and when to hold back?

Mr Wright believes there are three things that generally conspire to create soil problems. “The most important, without doubt, is drainage. If a field has difficulty getting water away there will be a problem,” he says.

“When soils are wet they are very weak structurally, and if you work them when wet you will get structural damage.”

Where drainage is poor, farmers could spend as much money as they want on crop nutrition and field operations, but drainage will remain the limiting factor, he adds.

“The second factor is organic matter: a soil with low organic matter content will be structurally unstable. It won’t be able to support soil life or heavy equipment,” says Mr Wright.

The third consideration is the weight of equipment used for fieldwork. “The heavier the equipment, the more you will compromise soil structure. If you have all three factors – poor drainage, low organic matter and heavy equipment – it’s the ultimate recipe for structural problems.”

Typically, tractors for primary cultivation weigh 55kg per horsepower – although that should be reduced for secondary cultivation, says Mr Wright.

“The higher the horsepower, the heavier the tractor. If you’re using the same tractor for both tasks, take some of the ballast off to reduce the risk of compaction.”

Although low ground pressure tyres and low tyre pressures will help to spread the load, the weight per axle is still a critical determinant of compaction risk, he adds. That is even the case with tracked vehicles, where the weight is focused beneath the idler wheels and solid drive wheels.

“With large tyres or tracked vehicles, you may be able to travel on wetter soils, but regardless of tyre size and pressure, the more weight you put on an axle, the deeper the impact on the soil,” says Mr Wright.

Most farmers will have a fair idea of problematic field areas, but they should dig test holes in both good and bad areas, to assess soil structure and develop an action plan, he adds. “Dig only two faces of the hole, so you get two clear sides to work with.”

Using a penknife, farmers should then see how the soil breaks apart – into large or small blocks, horizontally (indicative of compaction) or vertically.

“Look for worm channels and the way the roots are growing – if you can see signs of compaction, you can tell how deep you need to go, should you decide to take remedial action.”

Before working on fields, farmers should also rub some soil between their palms, says Mr Wright.

“If it forms into a worm, it’s too wet for any tillage apart from mole drainage,” he explains.

When relieving compaction, farmers should use the right equipment for the job, which would depend on the depth of the damage.

“If only the headland is suffering, don’t treat the whole field. And be aware that any tine has a critical depth below which, rather than lifting and cracking the soil, it pushes it sideways, compressing it.”

Since taking on the tenancy at Huxham Barton farm near Exeter, Devon, last year, James Lee has changed the rotations, improved field drainage and ploughed where compaction was an issue.

However, the soils are still woefully lacking in organic matter, and in some places compaction remains. “We are using duck litter and farmyard manure to build organic matter and nutrients, and we’re switching some fields from arable to grassland to give them a rest,” he says.

One field, on which sheep had grazed stubble turnips, is proving especially problematic. “I think we’ll have to subsoil it, because it is quite bad and the compaction is too deep to be relieved by ploughing.”

However, another field now looks really good after being sown to winter linseed last autumn. And Mr Lee plans to make more use of this deep-rooting crop in the future to improve soil structure naturally.

“We find linseed is the best break crop for wheat, perhaps because the roots do such a good job.”

Mr Lee is a strong advocate of minimum tillage, and uses a Claydon drill to establish most of his crops – something soil and cultivation specialist Philip Wright concurs with.

“Metal can’t turn a bad soil into a great soil – only natural action such as worm activity, freezing and thawing, wetting and drying can do that,” he says. “Any form of tillage will affect soil structure to a certain extent, but sometimes you need to give nature a helping hand.”

Ideally, soils should have porosity of about 50% and, when wet, half of that should be filled with water and the other half filled with air, making it spongy and aerobic, says Mr Wright. “If you squash it, it loses that capacity. It becomes harder to break apart and is likely to turn anaerobic.”

As well as testing organic matter levels, farmers should use deep-rooting cover crops to improve soil structure, organic matter and nutrient content. And where soil is in good condition, tillage should be kept to a minimum, he adds.

“The more you stir the ground, the more it affects soil structure. Do you need such a fine seed-bed? Can you do one less pass and still grow a good crop? The more you work it, particularly in warm, humid conditions, the more quickly organic matter will burn off.”