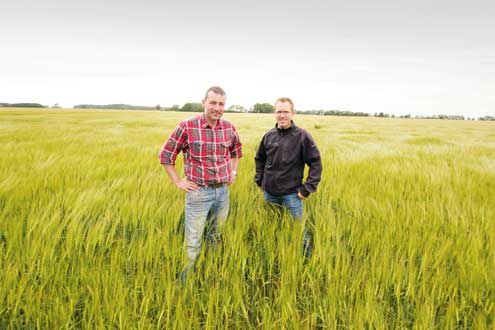 Standing in a tidy, well-stocked chemical store on a Danish farm, it came as a surprise that the grower paying for its contents believed pesticide taxes are a positive thing.

After a change in pesticide tax legislation from 1 July 2013, Danish growers are now paying up to 200% more for some active ingredients than before the new rates were introduced.

With some compounds, that now equates to a 1,000% tax rate over the base cost of the product.

With the announcement of the price increases came a rush to buy key products such as Stomp (pendimethalin) before the new taxes came into force, and that is exactly what Lars Hanson did.

And it is the integrated route that Mr Hanson believes agriculture must tread to achieve a sustainable future, both economically and environmentally.

He told Farmers Weekly on the recent Syngenta Farm Sprayer Operator of the Year winners’ trip to Denmark that he is using fewer chemicals as a result of the pesticide tax.

He now needs to justify their use more than ever and ensure that when they are applied, they are working effectively. He must also maximise cultural controls through the rotation.

“Water is cheap, so making sure the chemical is applied correctly with the correct water rates is important. If we have to spray again, it can get very expensive,” he added.

Introduced to Denmark in 1986, taxes were the same on all products except insecticides, which had a minimum tax of 30% added to the retail price.

Soren Holmgren, crop adviser with independent agronomy company Ostdansk Landbrugsradgivning, has seen taxes steadily rise since then and although he agrees there is the positive of improving practices, he also sees trouble ahead.

“In the beginning the taxes were reasonable and we could live with them, but it is getting increasingly difficult and growers in Denmark are in trouble now,” says Mr Holmgren.

Norway – under a similar pesticide tax system – has seen sulfonylurea herbicides become much cheaper in relation to other herbicides, resulting in increased use of one mode of action.

With the associated increase in herbicide resistance pressure, Norwegian growers now have rising populations of herbicide-resistant grass and broad-leaved weeds and Mr Holmgren fears the same could happen in Denmark.

“Maximum dose rates are also coming down each time we have a review, so as crop advisers we are fighting a real push-pull battle with the regulations,” he added.

Effective herbicides pendimethalin and prosulfocarb were mainstays of the Danish herbicide programme, but both are now subject to some of the highest rates of tax.

They have also been subjected to dose rate cuts, with pendimethalin reduced to 1.25 litres/ha, compared with the 2.9 litres/ha we can use here in the UK.

Prosulfocarb has suffered a similar reduction, with 2 litres/ha now the maximum dose. In the UK it is 5 litres/ha.

“They are now so expensive, many wouldn’t afford the maximum dose anyway and weeds are getting harder to control, with sugar beet an example of a crop that is very hard to keep clean,” explained Mr Holmgren.

The UK has escaped a pesticide tax system for now, implementing measures such as the Voluntary Initiative to promote the responsible use of the pesticide products available.

It has also been more straightforward to bring new products to market in the UK, with the recent approval of the new-generation SDHI fungicides.

This is something Mr Holmgren views with envy, as he points out the most effective group of fungicides will never make it to market in his home nation, due to the time it takes SDHIs to decompose in the environment.

“Environmental pressure is very strong here in Denmark and the public have no tolerance of seeing the consequences of agriculture on their doorstep, particularly in water supplies,” he said.

With no chance of further SDHI fungicide approval and similar resistance pressures on the triazole and strobilurin products, disease control in the future is a concern – in a country with an arable area that is in excess of 50% cereals – particularly if triazoles are lost.

The harsh Danish winter suppresses disease levels much more than in the UK, so pressure is much lower heading into the key spring period and a T0 spray is never required.

However, septoria, rusts, eyespot and fusarium can still decimate yields when they arrive later in the season.

“Without triazoles, we would be relying on strobilurin products and, as you know, in the UK they are no longer effective against septoria, so we would be in big trouble,” said Mr Holmgren.

Mr Holmgren believes that technology such as variable-rate pesticides may be a solution, allowing more careful application to allay Danish fears over the environmental effect of pesticides.

“If we could combine our experience of low-input agriculture with the more relaxed regulatory system of the UK, both agriculture and the environment could benefit,” concluded Mr Holmgren.

Syngenta Farm Sprayer Operator of the Year 2013 collects his trophy