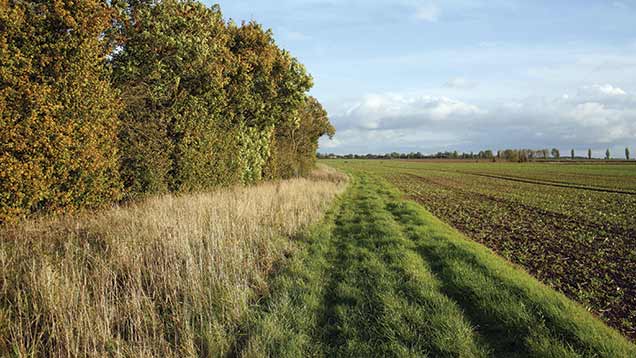 Farmers will be allowed more choice of hedgerows on their land to meet “greening” requirements in their CAP subsidy claims in 2016.

From next year, hedges separated from a field by another feature, such as a farm track or a wide ditch, will be counted towards greening requirements.

Under the current CAP greening requirements, hedgerows must be located “on or adjacent to arable land” to be eligible for claims.

For example, if the hedgerow is separated from the arable land by an ineligible feature, such as a stone track or a ditch more than 2m wide, it does not count.

The change to the Basic Payment Scheme (BPS) rules means from next year large arable farmers will have more flexibility when choosing hedgerows to count towards their 5% ecological focus area (EFA) requirement.

Defra secretary Liz Truss welcomed the move, which was announced by the European Commission as part of a series of changes to simplify the CAP for UK farmers.

In addition to the increased choice of hedgerows for greening, the UK secured two other changes from the commission:

Hedges are expected to be one of the most popular features used by farmers to meet their EFA quota, which requires arable farmers with more than 15ha to devote 5% of their land to greening measures.

Ms Truss said she laid out the case for the changes with EU farm commissioner Phil Hogan during a visit he made to the UK in February.

But she warned: “This is good progress, but there is much more to do and I will continue to press the commission to be bolder in its reforms, including a full and urgent review of the greening regulations, especially the three-crop rule, and more flexible inspections to allow farmers to use more photographic evidence to support farm visits.”

Richard Wordsworth, the NFU’s senior adviser on BPS, agreed that the changes were good news for UK farmers.

“It is a step in the right direction,” he said. “Anything that reduces the burden on farmers is always good.

“Flexibility to allow hedges that possibly could not be used in 2015, but can be in 2016, is welcome. Removing the need to have detailed maps of features that are not part of the application will help the RPA focus on the claims that have been submitted.”