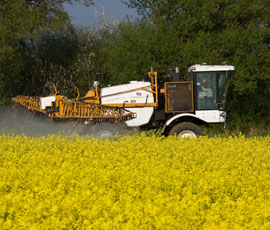 DEFRA has launched a draft consultation on sustainable pesticide use on UK farms.

The UK National Action Plan (NAP) for the sustainable use of pesticides is designed to bring the country in line with EU rules.

It is the next stage in the implementation of the EU Directive on the sustainable use of pesticides, which came into UK law on 18 July, 2012.

DEFRA has invited views on the draft plan, which has been designed to “reduce the risks and impacts of pesticide use on human health and the environment”. It was opened for consultation this week.

The plan focuses on the continuing use of voluntary approaches to meet pesticide targets.

Initiatives such as those promoted through the Voluntary Initiative (VI) are highlighted as ways to improve best practice without the need to regulate.

The NFU welcomed the plan and said that DEFRA’s evidence-based approach recognised the high standards of professional pesticide stewardship achieved by farmers and growers.

“We feel that this is a positive move, as a holistic, science-led approach to the management of pesticides is the right course of action.

“In addition, the recognition of the high standards of pesticide stewardship by the farming sector is welcome and justified, as the agricultural industry already operates to world leading levels of stewardship.”

However, green campaigners said the plan should consider banning certain chemicals that were harming the environment.

Friends of the Earth nature campaigner Sandra Bell said: “A national pesticide action plan is urgently needed to tackle the damage these chemicals can inflict on our health and wildlife.

“But today’s proposals contain no real commitment to phase-out the most harmful pesticides or help farmers find alternatives.

“Pesticide-use is increasing on crops pollinated by bees, heightening the risk to them – action to reverse this must be a priority.

“France has banned a pesticide linked to the dramatic decline in bee numbers – the UK should suspend neonicotinoids while their impact is assessed.”