Delaying cultivating or spraying off rotational fallow land for as long as possible are the keys to managing it most successfully for environmental benefit, according to a new decision tree produced by The Farming and Wildlife Advisory Group and The Game and Wildlife Conservation Trust.

Agriculture Minister Hilary Benn’s statement on zero percent set-aside on 26 September was a thinly veiled threat to the farming community that zero set-aside was not a licence to disregard green issues, given that DEFRA decided not to tighten cross-compliance measures to mitigate against its loss, Alastair Leake of GWCT says.

How much set-aside will be returned to production is still unclear. A NFU survey in August suggested the decision would come too late for cropping plans to be changed radically. But a more recent LEAF survey suggested more members were prepared to return land, Dr Leake says. “The difference is probably because cereal prices jumped by £40/t in the meantime.”

While he recognises growers were likely to return most rotational set-aside to production this season, some land is protected by being in stewardship schemes, he says.


It is worth considering keeping any areas of permanent set-aside as fallow, as that land may have become botanically diverse and important for biodiversity, Michael Woodhouse of FWAG says. “Often such land was marginal and difficult to work with, and while higher grain prices might now make a gross margin feasible, the workability of the land will not be any than it was previously.”

Similarly, field margin set-aside is located on the poorest yielding part of the field and brings benefits to wildlife and makes management of LERAPs easier.

“Beware the rules are slightly different to the ones that governed set-aside.”

The decision tree produced by FWAG and GWCT takes growers through the management options that these rule changes allow, and gives advice on how best to manage fallow land for the good of the environment.

Chief among these is the ability to cultivate or spray off land at any time, rather than just after 15 April. But Dr Leake is urging growers to delay cultivating or spraying for as long as possible, preferably into mid-May. “That will change the land from being worse than a cereal crop for the environment to being better.”

He re-assures growers worried about leaving control of pernicious weeds, such as blackgrass, until that time, that it will not set seed until June. It will also be easier to control in mid-May, when there is a big target to hit with glyphosate than during stem extension, when the plant can dilute the effect of the chemical during rapid growth, he says. 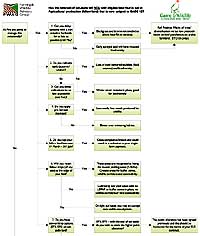