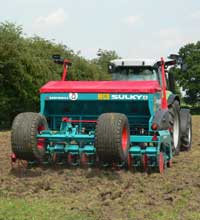 Due to reduced disturbance, soils could also retain higher nitrogen levels, reducing the requirement for inorganic N by up to 50%, he told the event audience at Askham Bryan College in Yorkshire.

To achieve these benefits, soil condition had to be made a top priority, said Mr Thomas. And existing soil condition would have a major impact on the time it took for improvements to be seen. However, if growers committed to the system they would reap the rewards, he said.

Cover crops were important as they recycled nutrients such as P and K and prevented nutrients leaching from the soil, he added.

Mr Thomas has been direct drilling for 10 years on 180ha of poor quality soil in the Sologne region of France.

Organic matter has significantly increased and a vertical soil structure, with good moisture retention and root penetration, has replaced a layered structure left from the previous plough based system.