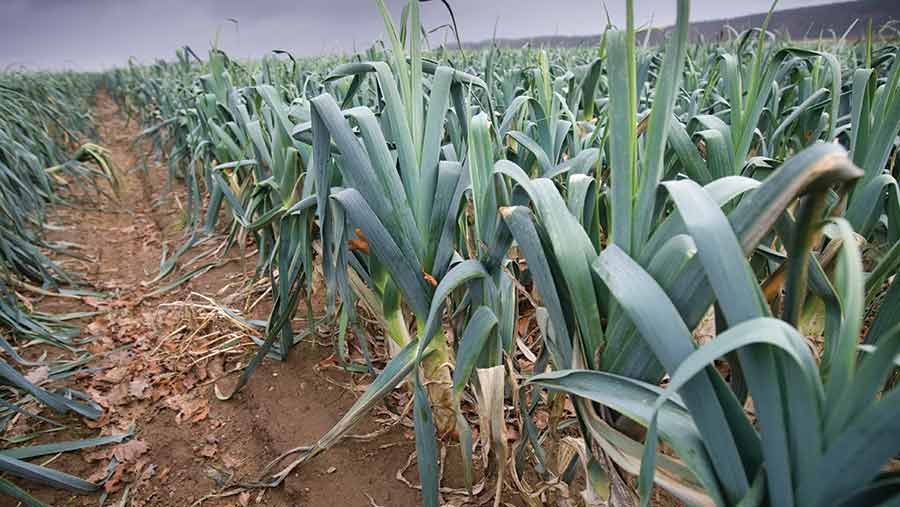 Like wheat, leeks thrive in the British climate and growers face the same challenges as their cereal counterparts – including insects developing pyrethroid resistance and a dwindling herbicide armoury.

Leeks were once grown widely across the country, but in recent years production has become concentrated in Cambridgeshire, Lincolnshire and the Midlands – although sizeable areas are still grown elsewhere, such as north Wales.

As with many high-value, labour-intensive fresh produce crops, production rationalisation has been an inevitable consequence of tighter financial margins – something that remains a big challenge for the sector today, says Leek Growers Association chairman and Lincolnshire farmer Tim Casey.

Price pressure and rising input costs continue to squeeze profitability, but with about 50% of turnover spent on labour, increases to the minimum wage are compounding the pressure, he says.

The season for British leeks

The loss of active ingredients is also a concern, especially as so few products are approved for use in leeks (most are used under off-label Extensions of Authorisation for Minor Use) and there is little development of new chemistry for minority crops, he adds.

“Improvements in technology, more automation, robotics and developing new markets might all help the sector in the long-term, especially as there is still a reasonable appetite for home-grown produce. But leeks are expensive to grow and can be very variable, so there has to be a reasonable margin for people to continue.”

Mr Casey, who grows 32ha of leeks alongside asparagus, sugar beet and 200ha of cereals, oilseed rape and beans, says growing costs (establishment, seed, sprays, fertiliser) are typically £6,200-£8,600/ha. “But you could easily double that by the time you include the cost of harvesting.”

Leeks are available nearly all-year-round, starting in late June and ending late April or early May, depending on the weather and development of bolting, with peaks in autumn and spring.

The long growing period – some crops can be in the ground for up to 12 months – means yields are unpredictable and heavily influenced by soil type and weather, despite the crop’s natural cold tolerance.

Leeks have traditionally been grown either from bought-in transplants grown by specialist breeders or from seed.

Pressure on margins, combined with advances in breeding and technology, mean most crops are now grown from precision-drilled seed, according to Agrovista agronomist John Allan.

This has contributed to a migration of production away from silty soils towards fen and sands with good irrigation capacity, as there is less risk of soil capping inhibiting germination of the small seeds, he says.

“As margins tighten, achieving decent establishment and plant stand is even more crucial. Good seed-bed preparation and avoiding capping are key to this.”

Leeks can grow on a range of soils, but prefer land with a relatively high pH. Sandy soils have the advantage of allowing harvesting rigs and other machinery to travel during winter months, but are inherently more drought-prone, Mr Allan notes.

“It’s a fine balance between this and silts, which can be more challenging to get on to, but retain more moisture so don’t need as much irrigation.”

Hybrids dominate the seed market, with a range of varieties available for different sowing and harvest dates. Growth habit, maturity, bolting resistance, disease ratings and appearance are key drivers of choice. Mr Casey says between six and eight varieties make up the bulk of his area, although several more are being trialled.

“We normally start drilling as soon as possible in spring, typically late February to early March, and continue through to May. The earliest harvest will be taken in August, while the last crops come off the following April or early May.

“That’s too late for most spring crops to be drilled, apart from maize, so we rent that land out to a neighbouring farmer who grows maize for AD.

“Crops taken off in January to March can usually be followed by spring malting barley, which seems to work well.”

Pneumatic disc drills are used for precision-sowing leeks to millimetre accuracy, says Mr Casey, who was an early adopter of RTK guidance, which is now used across the farm for drilling and hoeing.

The standard row width for maincrop leeks is 450mm, while seed spacing is typically 37-63mm for direct drilling, or 75-150mm for transplants.

Protecting leeks throughout the long growing season is a big challenge, and one being made harder by the loss of available chemistry, says Mr Allan. This year is the last opportunity to use the post-emergence herbicides Totril (ioxynil) and Aramo (tepraloxydim), for example.

“Ioxynil used to be the backbone of post-emergence broad-leaved weed control and while the main alternative is bromoxynil (as in Butryflow and Buctril), the industry is still getting to grips with how best to use it,” he says. “Aramo was particularly good on annual meadow­grass and there isn’t really an alternative, so future weed control could be a concern.”

Mechanical hoeing or ridging provides non-chemical alternatives, but such practices are expensive and can reduce the effectiveness of residual sprays if done too early, he says.

“Leeks are not competitive against weeds, so control should ideally be based on a robust pre-emergence, followed by ‘little-and-often’ post-emergence sprays to ensure crops are kept clean. But this is getting harder as chemical options diminish, so spot-spraying or other novel forms of control could find a place.”

White rot is soil-borne, so can be a bigger concern where leeks are grown close in the rotation, he adds.

A reasonable range of fungicides is available (mostly off-label approvals), so disease control is not a major issue, Mr Casey says. However, he worries that future EU pesticide restrictions could put greater resistance pressure on those that remain.

“The key timing for disease control is as soon as the canopy gets thick, which could be September or October, right through the winter. Finding available spray days when you can travel can be an issue.”

Thrips are the biggest pest problem, largely due to the visual damage caused to stems. Thrips will affect crops as soon as conditions are warm enough, usually from May to October, says Mr Casey.

Pyrethroid resistance is making control much harder, he says, especially as chemical control options are so limited, although Mr Allan says there is some promising new chemistry in the pipeline, but it is not yet approved.

Other potential pests include the leek moth, or onion leaf miner, and bean seed fly. The latter can usually be controlled with seed treatments, notes Mr Allan.

Leeks are relatively nutrient-hungry so need fertile soil with good P and K indices (index 2 or above).

Irrigation is applied where necessary, with the main period being July to September.

The main way of harvesting leeks is with large, manned rigs, where crops can be picked, trimmed, washed and packed in the field. It is a labour-intensive process involving long hours outside during winter months, which sometimes makes staff recruitment difficult. Mr Casey typically employs 15-20 people during harvest, but larger growers could require several hundred.

Whole-crop harvesting and off-site processing is an alternative, although this presents other issues with the transport and disposal of soil, water and trimmings.

Leeks can be cold-stored to prolong availability – but, as with any fresh produce, there is a cost so most crops are supplied fresh from the field, says Mr Allan. Storing leeks also risks the inside leaves “telescoping” (growing), which means extra trimming may be needed.