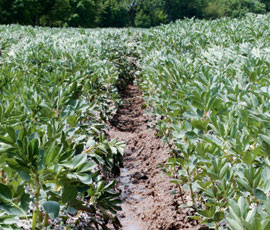 The very low numbers of pods set on many of this year’s winter bean crops are due to a combination of factors, both seasonal and agronomic, said Becky Ward, PGRO’s principal technical officer.

Early drilling at high seed rates, followed by cool, cloudy conditions with plenty of rainfall, mean that crops are very tall and dense, she explained.

“Much of the growth has gone into the stem and foliage, rather than pod set,” she said. “Crops are too thick, light hasn’t been able to penetrate the over-thick canopies very well and we’ve had higher rainfall levels than normal, which has kept them growing.”

The cool, cloudy conditions which occurred for much of the spring and early summer also had an effect on pollinating insect numbers, she added.

“There were low levels of pollination by these insects, as it was too cold for them and conditions didn’t suit their activity. And even though beans are self-pollinating too, the thickness of crops prevented this process from taking place as it should.

“The outcome is that many crops have failed to set pods. Others have pods on the bottom and top trusses, but none on the middle trusses. So in these crops, yields are likely to be down.”

Huge disease pressure, mainly from chocolate spot, has also been experienced by winter beans, noted Ms Ward. “The combination of very dense canopies and unsettled weather conditions means that we’ve seen a lot of disease. Leafy varieties, such as Clipper, have more disease in them.”

“There were low levels of pollination by these insects, as it was too cold for them and conditions didn’t suit their activity. And even though beans are self-pollinating too, the thickness of crops prevented this process from taking place as it should.”
Becky Ward

Improving the performance of field beans is the aim of a TSB-funded project, in which PGRO is leading the agronomy work, she added.

“We’re looking at sowing date and plant populations, in both winter and spring beans, to see if we can improve yield responses. We’re also looking at the timings of fungicide and insecticide applications.”

Three different sowing dates and four target plant populations are being investigated this year. “We don’t have any final results yet, but we have observed higher levels of both rust and chocolate spot in earlier drilled crops and where higher plant populations have been established.”

Spring-sown lupins are being evaluated at PGRO, as part of a larger research project on developing a growing system for UK grain lupins, explained Anthony Biddle.

“Behind it is the need to reduce our reliance on imported soya and use them in animal feed,” he reported.

Lupin seed has a high protein content, together with good oil, he added. “There are three different types of lupins, but some are too late maturing for the UK.”

Focus is now on breeding alkali tolerant lines, which can be grown across the country.