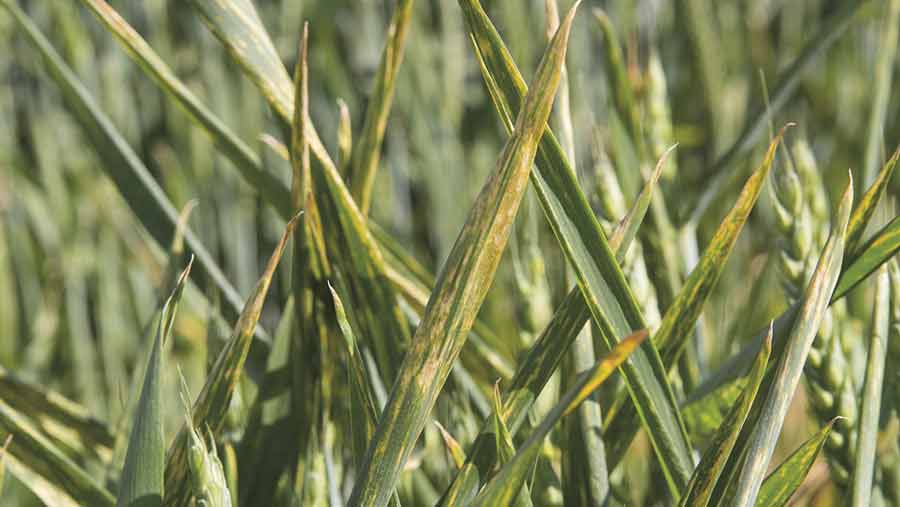 A disease forecasting system that can warn of disease up to four weeks before symptoms are seen will be behind a new CropMonitor service being launched this autumn.

As part of an Innovate UK project, the Food and Environment Research Agency (Fera) has been developing spore trapping and detection technology to measure pathogen risk in fields. The forecasts would then help farmers with their spraying decisions.

Judith Turner, head of plant pathology at Fera, explained that the prototype machine essentially amalgamates a spore trap with a Genie detector system.

See also: Improved SDHI fungicide on the cards for next season

But unlike normal spore traps, it samples a much larger volume of air and is, therefore, more sensitive.

It sucks in 100-140 litres/min compared with 5-10 litres/min with normal traps, making it more powerful when looking for rare spores. The sample is then placed in one tube every 24 hours and analysed using DNA for the different pathogens.

Results are then transmitted via mobile or satellite connection and then fed through the CropMonitor forecast models to identify risk.

The technology has undergone its second season of validation and she highlighted an example where the detector showed a small spike in yellow rust spores at a site in Cambridgeshire on 13 April.

Four weeks later, the disease was observed. The average temperature was 6C and over four weeks this equates to 170 degree days, which matches the disease’s latent period.

Equally, there have seen situations where conditions were conducive, but there were no spores and, consequently, there was no disease.

In the next two weeks, the fully automated prototype will be going out in field trials. “This be the first time spore detection will be done in the field in real time,” she said.

This is automating the process, as previously it involved human input.

Dr Turner added that the machine is modular and initially will detect septoria, yellow rust and brown rust. However, it can be used to monitor any disease as long as it produces airborne spores.

This spore detection system is set to bolster the CropMonitor service, and it will also be at 30 sites increased from the current six.

In future, she sees even more sophisticated diagnostic tests that may indicate the strains present, such as sensitivity or resistance to specific fungicide actives.

Will Charlton of Bayer, who are partners CropMonitor, sees this as having significant value, as it can help farmers reduce resistance risk.

He believes the system will benefit farmers by giving them an earlier warning, allowing them to adapt their fungicide programme to the disease risk.

“Farmers should stick with the traditional T timings, but can tweak according to what diseases are present.”

Dr Turner added that the project is working towards farmers being able to reduce sprays applied and be more targeted. This will reduce input costs and help reduce resistance pressure.

Another spin-off for the future is an in-field detector for farmers. She believes a commercial system could be developed that is smaller and used by farmers or agronomists wishing to monitor disease in their own crops.

The three-year project is a collaboration between OptiGene, Fera, the University of Hertfordshire, Bayer and Frontier.