Farmers are being urged to help stop the spread of a disease currently confined to the North and Scotland, as severe infestations could see pea growing being abandoned in some parts of the UK.

Foot-rot disease in peas can have a major effect on yields, with infected plants appearing yellow in colour and stunted (pictured below). Plants often die before pods reach their full potential. 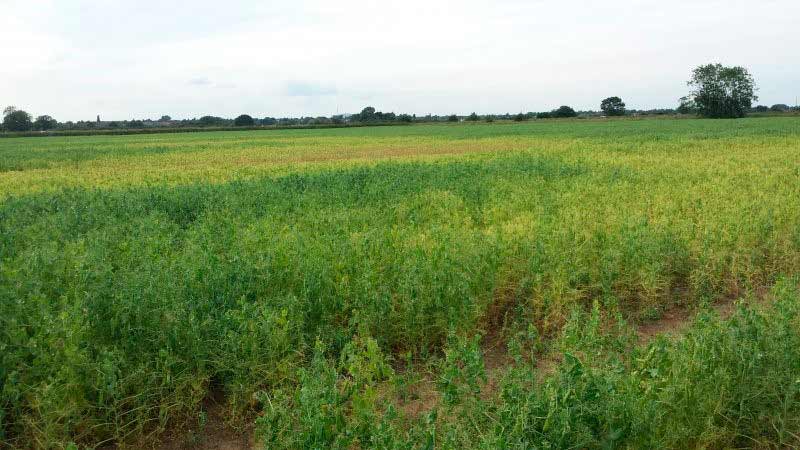 Foot-rot in a pea crop © PGRO

The disease is caused by infection of plant roots by soil-borne pathogens, explains Lea Wiesel, a plant pathologist at the Processors and Growers Research Organisation (PGRO).

In the UK, Fusarium spp and Didymella pinodella have traditionally caused foot-rot in peas.

“But now another very destructive pathogen, Aphanomyces euteiches, has been adding to the foot-rot complex.

“This is a soil-borne oomycete that produces long-lasting resting spores [oospores] that can survive in soils for more than 10 years, and even low numbers of resting spores can have devastating effects on yields.

“Once a field is infected, it can’t be used for pea cropping for at least a decade,” warns Dr Wiesel.

There is no chemical control available and the only ways to try to control the effects of the disease is to stop its spread across the UK and to keep pathogen levels as low as possible in infected fields.

“Aphanomyces euteiches is thought to be a fairly new pathogen in UK soils and its distribution seems to be restricted to northern parts of the UK so far.

Dr Wiesel says it is important the farming industry stops it getting a hold in UK soils. She points to some areas in France and the Great Lake regions of the US that are so heavily infested that pea production had to be abandoned.

“Although disease severity is dependent on soil structure and weather conditions, potentially the most important factor is the pathogen level in soils.”

How to test soil

To help farmers, the PGRO has developed a lab-based test to assess risk levels in soil. Infected roots are soft and honey coloured and cannot support plant health (picture below). 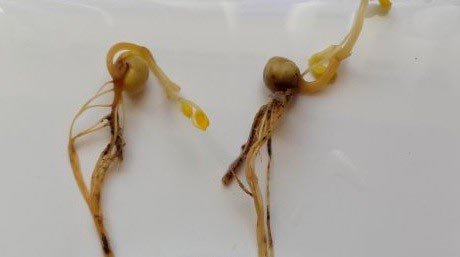 Roots of a pea plant infected with foot-rot © PGRO

Infection severity is scored on a scale of 0 to 5 (0 = healthy roots, 5 = dead roots) and any soil with an index of 3 or more is very likely to lead to heavily diseased plants and subsequent reductions in yield.

In order to get soils tested for levels of the pathogen, growers should send a soil sample of about 2kg that has been collected in a “W” shape across the field with a note to say that they would like the soil to be tested. The price per soil sample is £149 with results within three weeks.

Dr Wiesel advises growers to send in samples about 12-18 months before planting pea crops, in order to allow sufficient time to replan should high levels of the pathogen be detected.