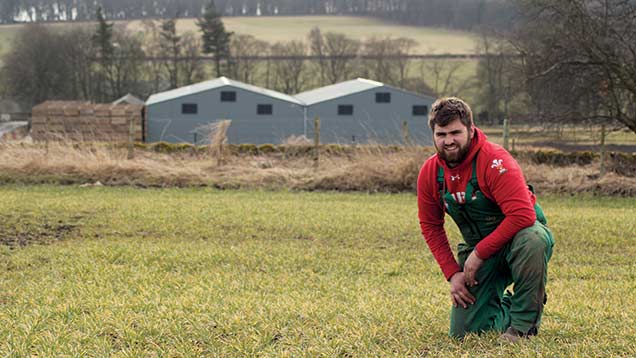 Prevention is better than cure for one Angus grower as he looks to keep disease out of his cereal crops from the start of spring and build yield from the bottom up.

James Fairlie, 27, has recently taken on the management of the family farm, alongside his father Iain. The  farm is situated near Kirton of Monikie, about 10 miles north-east of Dundee in the intensive potato-producing region of Angus.

The Fairlies own about 325ha of fertile medium loam land and rents a further 80ha, growing winter barley, spring barley, winter wheat, oilseed rape and ware potatoes, with forage rye being tried for the first time this year.

In an intensively cropped area such as Angus, James Fairlie says the farm has to adopt a thorough disease control strategy, as pressure can ramp up if the weather works against them.

“We have to spend the money on fungicide – if you try to cut corners here you can end up with a disaster on your hands – particularly in potatoes,” he adds.

Only ever a stone’s throw from another barley or wheat crop in all directions, disease inoculum can spread and always find a happy home, so a preventative approach is favoured in his cereal crops.

“You wouldn’t build a house on bad foundations and it’s the same for a crop – you would never reach the potential of the crop if you let disease take hold.

“Prevention is much better than cure and we’ll be basing our disease control strategy on a similar programme to the one used last year.”

Timings are also crucial for Mr Fairlie and the farm is equipped with a 28m self-propelled Bargham sprayer, allowing the sprays to be applied precisely when they need to be.

“We are not on a massive scale, so we can be particular about when we go. A half-day here or there can make a big difference,” he adds.

The farm’s 24ha of Retriever winter barley has come through the winter in good health, with Mr Fairlie describing it as a “stressless” winter for the crops in a region that can endure harsh conditions.

Mildew and rhynchosporium are usually the biggest concerns, but net blotch can also provide a headache in some seasons and the two-row feed variety doesn’t offer robust resistance against all three.

A heavy-duty T0 application is always planned in the farm’s winter barley crops, with a tank mix of specific mildewicide Corbel + Kayak getting the crop off to a clean start by taking out any overwintered mildew.

The spray also has activity on rhynchosporium, net blotch and eyespot and a top-up of manganese is  added.

“The cost is a bit higher than most, but we see it as a good insurance policy – better safe than sorry. There is nothing worse than getting in a crop with the combine, looking at the yield monitor and thinking: ‘If only we had done a bit more’.”

The rest of the barley fungicide programme is based on prothioconazole, which according to HGCA trials remains the strongest azole for controlling barley disease, and multisite active ingredient chlorothalonil, contained in Bravo.

The farm focuses on getting their T1 application spot on, protecting the crop from disease at the key yield-builing stage, which is earlier in barley than winter wheat.

“If we are advised by our crop consultant, we’ll also add a growth regulator such as Moddus if the crop needs it, but the focus is on timing,” says Mr Fairlie.

An SDHI element is bought in at T2 around mid-May, when the crop’s awns are peeping through, with Bayer’s Siltra Xpro the favoured choice.

The SDHI component, along with chlorothalonil at this timing helps to prevent ramularia infection in the crop.

A growth regulator is also included at this stage if the growing season dictates, but this hasn’t been necessary for a number of years, according to Mr Fairlie.

The farm plans to drill about 52ha of spring barley when conditions allow through March and both the T1 and T2 choices in their spring barley will mirror those in their winter crop.

In 2014, this approach provided some good results, as their Concerto malting crop achieved 7.75-8t/ha.

“It isn’t the highest-yielding variety on the list, but all the maltsters like it and it is early maturing and has good straw, so we don’t see any reason to change,” adds Mr Fairlie.

The farm has about 123ha of winter wheat in the ground this season and a similar preventative approach is taken to keep septoria and mildew out of their soft group varieties Viscount and Beluga.

The fungicide programme discounts strobilurin-containing products due to resistance in septoria and mildew populations. Strobilurin’s strength on rusts can be covered by the SDHI component of the wheat fungicide program.

“We don’t usually have a problem with rust, but we are starting to see it creep in. A T0 of Cortez should clear up any disease early and again that will be combined with manganese and a dose of PGR chlormequat,” adds Mr Fairlie.

Eyespot can be a problem in the wetter northern conditions and is crucial to get on top of early, so Tracker is favoured at T1 for its strength on the stem-based disease, along with Bravo and PGRs Moddus and chlormequat.

“We will then use an Adexar/Bravo mix at T2. We don’t tend to use cheaper products and would rather spend a little more on products that we trust and know are effective,” says Mr Fairlie.

He adds that wheat crops are also looking well, with good potential that will be worth protecting. “You’ve got to speculate to accumulate.”