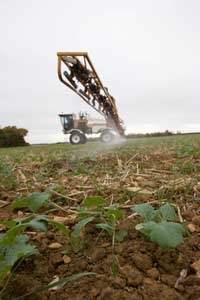 Do you specify Monsanto-made glyphosate? Who makes your epoxiconazole fungicide? Does it even matter?

The battle between firms who produce and market their own pesticide active ingredients and those who produce the equivalent product once the original patent expires is heating up in the UK.

More and more big name active ingredients are going to follow epoxiconazole, the triazole fungicide that came off-patent last season, leaving the way open for generic manufacturers to enter the market with their versions of some hugely successful products.

But do generic products offer the growers equivalent efficacy, or are they just a cheap, less effective, even damaging alternative?

It all comes down to money. Because generic manufacturers don’t have to spend millions on active ingredient discovery and subsequent development and testing, they can typically supply products cheaper on farm than the original version.

And if that is combined with equivalent, or even better, efficacy than the original product then for the grower it’s difficult to argue against it providing better value for money.

Some generic manufacturers, notably Israeli firm Makhteshim Agan, even invest to develop their own novel formulations, which they claim make their products more effective.

But for most the aim is to develop a formulation that matches the performance of the original.

Last year saw the launch of the first generic formulations of the key triazole fungicide epoxiconazole, perhaps the most significant fungicide patent expiry to date.

On-farm too, generic epoxiconazole performed as well as the branded-based products, according to North Yorkshire adviser Patrick Stephenson.

“I have seen little or no efficacy differences with epoxiconazole, particularly in tank mixes where the majority is used,” he says.

“Price is what you buy it for at the end of the day.”

“Cortez and Rubric seem to be at least nearly, if not definitely, as good as original products.”

Mr Stephenson believes there is definitely a place in the market for generics. “If the value difference is less than a few pence an acre then using an original is probably the safest bet.

“But as the difference changes to pounds, then good generics are an option.”

Only one generic product has caused problems on his clients’ farms. A generic version of fluazinam used for powdery scab control in potatoes didn’t appear to remain in the ridge as effectively as the brand-name Shirlan version following heavy rain after incorporation, he explains.

“That’s more of an issue of copies of R&D products – where someone has tried to fraudulently copy the product, the trademark, packaging,” he explains.

“They have an issue because they are not renewing their product range and as time goes by, the patents for their existing products are expiring.

“Generic manufacturers bring out a cheaper version, which give growers choice and can only lead to better value for farmers.

“But R&D manufacturers try to erode confidence in the industry by protecting their own products and saying anything which features the word ‘generic’ in is sub-standard, which I simply oppose.”

Mr Barrett points to Makhteshim’s fluazinam, Volley, to argue that some generics are better than their trade counterparts. It, for example, has a formulation which, unlike Shirlan, is irritant-free, he says.

Makhteshim is different to most generic producers because it invests heavily in its products. “Wherever possible we will develop a better label than the product we are competing with,” he says.

“We offer alternatives to the current products, we provide competition, which helps price competitiveness, and we provide innovation with novel mixtures, plus new formulation technology.”

The major R&D firms spend up to £200m in bringing new active ingredients to the market. Patent protection lasts for at least 20 years, but it does include pre-launch development time.

So it is no wonder those firms want to prolong the life of their active ingredients for as long as possible.

And the key for growers is usually by the end of the product’s patented life, everyone is very familiar with what the R&D version will do. Buying brand names offers a guarantee of a quality product with proven results.

Having a BASF label on the container, for example, is an assurance of the provenance of the contents and the highest standards of production, the firm’s Andy Jones says.

The firm performs rigorous tests on all products on quality of formulation, including how reliably they work in varying conditions, programmes and tank mixes and the final disposal of containers.

Generic products are “never exactly the same as the originals upon which they are based,” he says.

“You get what you pay for with brand-name products,” says Clive Rainbird, Bayer‘s PR and communications manager.

Once a patent expires there is a race to bring generic versions to the market, he suggests.

“That reduces development time as they want to be the first in the market post-patent, so it’s hardly surprising some products are not developed to a point that an innovative R&D company like Bayer would be happy with.”

Trials with generic versions of Bayer products, such as tebuconazole (Folicur) have shown “big differences” in efficacy, safety and sprayability, he claims.

He also warns that growers who buy generics may not receive the same level of support if a pesticide fails and/or things go wrong with a crop.

“R&D companies like Bayer have teams of regionally-based technical managers who provide adviser training, product stewardship and on-farm support for their products.”

Generic products offer a chance to cut costs, but farmers must balance this against a lower level of customer support, agrees Mr Cook.

“It’s a complex picture out there. Not all generic companies are the same. Some offer cheaper prices than others, but will they offer the same level of support if there are problems?

“Makhteshim Agan is a generic company, but we count it as an ‘R&D/generic’ company.

“In other words, it will do a lot of research and development. It will support its products.”

Not all generic firms are as good, he warns. Choose only reputable companies when buying, he stresses, and particularly ensure the product specifications are as good as the brand-name product.

Generic product packaging is also not always as good as the original. “Some products have foil seals which come off in a mess. Timing is everything when spraying crops and you want everything to be right.”

Mr Stephenson is also concerned about a possible lack of support provided by some generic manufacturers. Check the provenance of products and support before buying, he advises. In particular, take care with tank mixes – not all labels are as extensive as the brand-name.

“Farmers need the support of the manufacturer to assist with tank mixing recommendations, and any efficacy issues that might arise,” he says.

“Some companies that produce generics may not provide this. So what price insurance?”

Therefore, although the active ingredient may no longer be protected against generic competition, it may still be protected under different patents.

For example, the active ingredient patent for cyprodinil expired in 2008 but a UK Supplementary Protection Certificate (SPC) for a mixture product with picoxystrobin extended patent protection until 2013.

The potential benefit of that practice is that it drives the R&D firm’s innovation, whether the original active comes off-patent or not.

“It brings financial and other benefits to farmers,” Mr Jones says. “And is increasingly important in protecting yields and keeping costs of production per tonne down.”

About 35 active ingredients are due to come off patent in the next five years that are used in the UK or EU, Dr Uttley says.

“But it’s not an easy task for a generic manufacturer to get a product to the market,” he stresses.

“You have still got mixtures, formulation and process patents to consider before a ‘freedom to operate’ scenario can be achieved and in addition registration issues can create a barrier to generics entering the market.”

He has identified about 120 active ingredients that have lost patent protection over the past 10 years but some, as a result of these barriers, still have no generic competition.