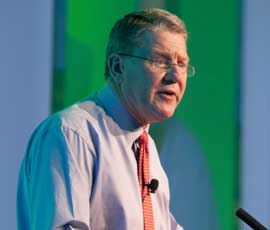 Give the NFU time to fight the decision to fossilise permanent grass fields in their current locations in the Common Agricultural Policy reform proposals, Peter Kendall, the NFU President, said at the Essex Farming Conference.

The NFU had clarification from the Commission on Tuesday [15 November] that permanent pasture – fields that have been in grass for more than five years – will be locked into those same field locations in perpetuity under the proposals, he explained.

“We had thought it would mean you would have to maintain the amount of permanent pasture on a holding, not in an individual block. The Commission is saying it wants to fossilise any piece of grass that has been grass for more than five years.

“We have plenty of farmers who actually have six or seven year rotations in grass. Some farmers want to expand livestock production because they see an opportunity, but then want to have the flexibility to cut back.

“I spend a lot of time defending our environmental track record – and the message I’m giving you is don’t go and plough up that grass. The message from the Commission would be go and plough it up before 2014.

“I’m telling everyone give us some time to turn this madness around. Because it is mad, if people do see us ploughing up any bit of grass over five years old, we will get environmentalists on our back, and undo some of the good work we’ve done in showing people how well we care for the environment.”

Mr Kendall also suggested there were still good reasons to support the Campaign for the Farmed Environment.

“With the involvement of the [European] Parliament, we believe there will be more freedom given to member states, and I suspect some of this greening will be allowed more national interpretation.

“If we have a CFE that can prove it has started new ways of working, and not just putting ELS applications through the roof, we do have demonstration farms, and agronomists are talking to their clients in a different way, then I think we have a better chance of DEFRA ministers using a carrot, rather than a stick, when it comes to national greening.

“I know one prominent land agent said CFE was “dead”, but that is a short-sighted, ill-informed negotiating stance. We should continue to show we do a lot of voluntary work on our farms, we take our environmental management seriously, and actually you’re better to let us do manage our farms individually, selecting the right options for our farms, rather than trying to do it from an office in Brussels.”