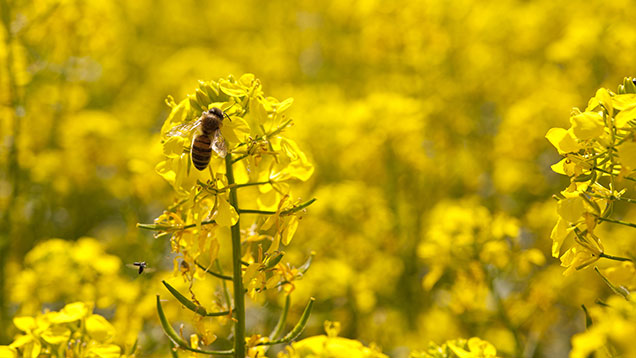 Concerns are mounting over the scientific backing behind a ban on neonicotinoid seed treatments as two researchers at the same university row over possibly flawed experiments.

The two scientists at the University of Sussex disagree on whether neonicotinoids were to blame for a decline in bee populations, which was the main factor behind the ban on the pesticide.

Bee researcher Norman Carreck is accusing his colleague Dave Goulson of feeding bumblebees unrealistic high levels of the neonicotinoid imidacloprid in the laboratory to show an adverse effect on bees.

See also: Neonic sprays given green light for use in oilseed rape

Nearly 3% of the oilseed rape crop was destroyed by cabbage stem flea beetles in autumn 2014 after the ban on the insecticides, and in hotspots like the M11 corridor damage has been much higher.

“This shows that there are significant questions over the science. Full field trials have not shown the levels of harm compared with artificial doses,” says Chris Hartfield, bee and pollinator expert at the NFU.

There is clear science to show that neonicotinoids are harmful to bees, but in all of those studies the bees have been fed artificial doses of the pesticides, Dr Hartfield adds.

“This shows that there are significant questions over the science. Full field trials have not shown the levels of harm compared with artificial doses.” Chris Hartfield, NFU

Luke Gibbs, spokesman for Syngenta, which saw one of its products banned, added the group has always said that lab-based results were inconsistent to what had been seen in the field

“We always had a problem that lab studies were not replicated in field,” he says.

The European Commission imposed its two-year ban in December 2013 on the use of three neonicotinoid insecticides imidacloprid, clothianidin and thiamethoxam as seed dressings on bee-attractive crops, such as oilseed rape.

Two major products  – Syngenta’s Cruiser (thiamethoxam) and Bayer’s Modesto (clothianidin)  were banned, and the EC says it will review the ban by December 2015.

Mr Carreck published his review paper in the Journal of Agricultural Research that said the neonicotinoid doses used by Professor Goulson were much higher than those that bees were likely to encounter in fields.

He pointed out that field studies had not shown evidence that neonicotinoids harmed honey-bee colonies in the field.

Mr Carreck, who has been studying bees for more than 25 years, concluded that the ban could do more harm than good as growers would spray crops with alternative insecticides which are more damaging to wildlife.

Professor Goulson says Mr Carreck has been a bit selective in reference to field-realistic doses and the ban should be extended beyond December this year.

The UK has always opposed the EC ban as well as the agrochemical industry, which has agreed to fund independent trials run by the Centre for Ecology and Hydrology.

One agrochemical giant is developing a replacement non-neonicotinoid oilseed rape insecticide seed treatment which could be available this autumn if emergence use is approved.