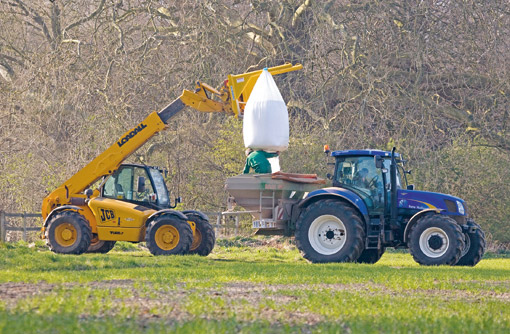 Winter plantings in the UK are significantly below expectations, with ADAS estimating farmers had planted 17% less winter crop by the end of November than the previous year.

Very little will have been planted since, and with crop failures also playing a part, Openfield’s Graham Colledge expects the winter area to be as much as 25% down.

“Sales of nitrogen, phosphate and potash fertiliser are all 15-20% behind last year’s – but cereal prices are very good, which will encourage people to get something drilled,” he says.

“Providing field conditions and seed supplies are sufficient there will be a lot more spring cropping, but we’re certainly not going to see 100% of the available area drilled up.”

With a UK fertiliser market of about 3.5m tonnes, and sales about 500,000t behind last year’s, Mr Colledge warns farmers not to leave purchases too late.

“Although interest is starting to pick up now, there is a concern about everything being left to the last minute, which will put pressure on the system in February and March. We’d advise farmers to have at least something on farm, and not leave everything to the last minute.”

Prices have remained flat since last summer, with phosphate losing £20-25/t over the past month due to ample global supplies, he adds.

Granular urea is in short supply, with importers nervous of booking further shipments, says Mr Colledge. “At £345-350 it’s competitive against AN on a unit value, but agronomically it’s probably less attractive.”

Fresh buying demand in Europe and South America means urea prices have increased by about $20/t (£13/t) over the past week – although that is yet to show in UK values, says Calum Findlay, fertiliser manager at Gleadell. “Lost production due to gas supply issues in Egypt will now underpin prices at a time when buyers cannot defer buying decisions much longer.”

However, global fertiliser supplies are likely to be plentiful in the next few years, due to a spate of new manufacturing plants, according to David Beck, marketing analyst at GrowHow.

“The global nitrogen nutrient market is about 110m tonnes and growing by 3-4% a year. By 2016 the estimated capacity will be 7-8% greater, so logic would say that prices should come down.

“However, one of the biggest new plants in the process of commissioning is in Algeria, so the capacity is likely to come on quite sporadically. Cereal and gas prices also play a part, while marginal producers may mothball plants if they’re not profitable.”

Between 60% and 70% of nitrogen orders are normally made in June-July, and although sales are about 10% behind normal, many farmers will have more than adequate supplies on farm, especially as spring cereals require less fertiliser than winter crops, he adds.

That said, the wet weather means residual nutrient levels in the soil could be lower than normal. “I think soil sampling could come into its own this spring – the early samples we’ve seen show quite low nitrogen levels, but they are also extremely variable. Taking average book values could be very misleading this year.”

Farmers should also ensure they apply sufficient phosphate and potash, says Mr Beck. Average phosphate applications have declined from 53kg/ha in 1997 to 27kg/ha in 2011, while potash dropped from 66kg to 35kg over the same period.

“While we support efficient nutrient management, farmers shouldn’t take it too far – you do need sufficient levels to ensure optimum uptake of nitrogen and sulphur.”

Brush up on your nutrient management knowledge in our e-learning zone. The fertiliser course includes modules on nutrient mangement in crops and the latest precision farming technologies. Take the test and earn CPD points on Farmers Weekly‘s Academy