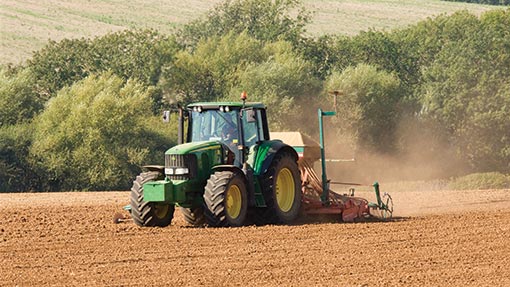 A swift start to harvest has propelled cereal drilling to the front of growers’ minds and with autumn just around the corner the decision to drill early or hold off is imminent. Luke Casswell spoke to three agronomists to get their views on early and late drilling.

In a region renowned for cold, wet weather, Scottish growers have become adept at making the most of early and late drilling windows.

Following an early start to harvest, Andrew Gilchrist from Scottish Agronomy expects a large proportion of winter wheat will be sown earlier than normal in the first week of September, as growers look to counter the unpredictable weather.

“You never know when the weather is going to hit here and if you are going early then you are spreading the risk and giving yourself a much larger sowing window,” he explains.

He points out that disease pressure in wheat was particularly bad, with growers seeing the worst cases of septoria for many years.

“The crops sown at the end of October were notably better than to the stuff that was sown earlier. Septoria was very difficult to get on top of in early sowings so growers will certainly not want a repeat of this.”

Last year, proud early-sown crops were given a get out of jail free card with the mild winter reducing the threat of snow mould and snow rot. However, Mr Gilchrist warns that those opting to go early are at greater risk and growers should be careful, particularly with a prompt harvest opening up opportunities for early drilling.

Grassweeds will also influence drilling date further north, and while Mr Gilchrist advises growers with a min-till approach to consider delaying drilling and achieving a chit of weeds such as brome, he says early drilling for others will offer a good opportunity to tackle weeds.

“We would tend to get more efficient control in earlier sowings with the crop being more competitive and the weeds growing more actively, generating a quicker flush so the herbicide is working more efficiently.”

The potential for improved yields through better establishment is one of the main drivers for growers opting for early drilling, according to independent Nottinghamshire-based agronomist Peter Brumpton.

He says crops that have established well early, often have a good rooting system will cope far better in potentially adverse conditions through the critical grain fill period and will often be the preferred choice for some growers.

“You are usually able to create a better seed-bed earlier on, with warmer/drier soils and longer days.”

He also highlights the benefits for larger growers, who are able to spread the risk and make the most of the wider drilling window by drilling early.

However, early sowings bring the ominous threat of blackgrass to the fore, with a reduced chance of achieving a chit, particularly in a high dormancy year, heaping pressure on pre-emergence sprays.

“The start of the second week of September onwards would suit growers who haven’t got bad blackgrass problems but if they have – you want to be looking at sowing in October.”

Meanwhile, late drilling in November and December after a root crop or October after oilseed rape offers the “golden chalice” of improved blackgrass control with more opportunities to get a decent weed flush prior to drilling.

“If you can go later, then do it. But growers, particularly larger ones, will need to get going at some point and the later you go the shorter the days become and the more unpredictable the weather is, so it is really a balance.

“You can potentially get into as bad a mess going later as you can with going early in high blackgrass situations.”

Mr Brumpton points out with winter wheat, growers have the chance to go very late if needed, but should make the decision on a field-by-field basis and depending on soil conditions and the final seed-bed.

“If you can get the right conditions and the variety allows you too, then you can try to hold off wheat drilling.”

Barley will be different, he says, urging growers not to go too early to avoid amplifying the lodging and disease risks, which will also be present in wheat.

Following heavy disease pressure this season, variety choice will be key. Some of the highest levels of yellow rust were recorded in early-drilled susceptible crops exposed to the disease for a longer period.

Drilling dates for Oxfordshire-based independent agronomist Luke Cotton largely hinge on blackgrass control and in areas where cases are too severe, early drilling is not an option.

Yield loss in the initial crop is the first worry, but Mr Cotton warns growers are setting themselves up for future problems and run the risk of losing the crop later in the season, which they cannot afford to do at current grain prices.

“I try and get my guys to delay until 20 September, but we are really having to pay more attention on a field-by-field basis and reduce the reliance on sprays.”

He suggests that the ultimate delayed drilling option of a spring crop may be needed in some scenarios where the grassweed is particularly bad.

“Spring crop 20-30% in the worst areas, delay autumn drilling for moderate blackgrass populations and then only in the cleaner fields go early.”

Despite the most severe blackgrass often being on the heaviest land that isn’t always suited to late drilling, he stresses some cases are so bad drastic action is needed to get results.

Disease pressure will also be a factor in the early-versus-late debate and last year September-sown crops experienced much less disease than those drilled in October.

“The practicalities mean that growers will need to spread the risk and go earlier but this does mean spray programmes and timings will need to be spot on.”