Potato growers could get 15% more yield and cut water usage by the same percentage by switching from rain guns to drip irrigation, according to on-farm trial results.

A sufficient supply of water is critical to maximising potato yields, maintaining skin quality and ensuring they meet market specifications, but traditional rain guns are under scrutiny because their soil-saturating style is raising concerns about run-off and worries over water scarcity.

The land, which runs from light gravel through to heavy river silt and clay, sits in the rain shadow of the eastern side of the Pennines, just a few miles from the British Sugar factory in Newark, so is completely reliant on irrigation to maintain acceptable levels of yield and quality.

Mr Smith says a potato plant typically needs around 4mm of water per day, but a pass with a rain gun delivers 18-25mm in one go to allow several days’ water for the crop, and this method is more likely to lead to run-off.

And while water isn’t currently a limiting factor on the amount of potatoes they produce, they are aware that when their abstraction licences come up for renewal in the next five years this could potentially be severely reduced.

Rain gun usage also means that at any one time a portion of ground is at saturation point, which can cause soil structure damage or run-off if it is followed by further rainfall, or can lead to compaction issues if travelled upon.

He explains that there are already no new abstraction licenses being issued for the River Trent catchment area, and there are limits on withdrawals during dry spells, although the farm has reserves to draw on from naturally filling former gravel quarries. 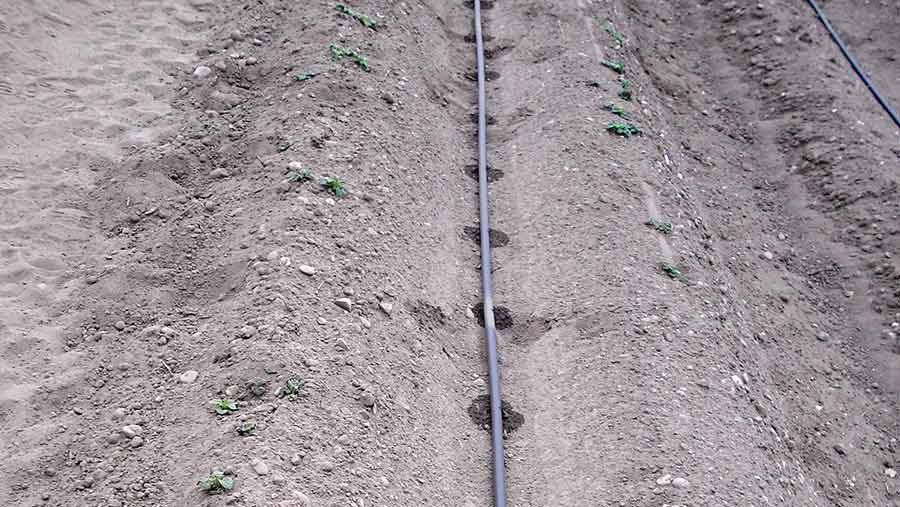 The farming duo are cautiously pleased with the trials of the new irrigation method, now into the third season and 50ha in size, but say the high setup costs and more technical nature of the system does present some challenges.

Investing in the kit is expensive, at an estimated price of £2,000/ha, and unlike a rain gun, which can be left in the shed during a wetter season, drip irrigation equipment has to be assembled immediately after planting.

This means the equipment will suffer wear and tear whether it is subsequently needed to irrigate crops or not.

“We have budgeted that the pipework has to last for 10 years for it to pay for itself,” says Mr Smith. “Although it’s currently only in its third year, it looks like it’s going to do that.”

Across the rest of the potato crop area, the farm operates a total of 28 hose reel railgun irrigators, with neutron probes delivering data on the water deficit so that operators can set how much water is to be delivered to plants in each field.

With four to five reels taking an operator up to seven hours to move with a tractor, this is a significant amount of workload in a dry season, when rain guns may need to pass over each field up to 11 times.

In comparison, the equivalent area can be maintained in 90 minutes with a drip irrigation system, explains Mr Burnett.

However, while workload is reduced through the season, the drip irrigation network is technical and time-consuming to set up after planting and take down before harvest.

This means that total labour for irrigation over the season is roughly on a par between both systems, but rain gun workload is more spread out.

This season they had to irrigate from the middle of May, early by their standards, and used significant quantities of water right through until the end of July, when wet weather became more frequent.

The pair see the two systems as fairly equal contenders when expenditure and labour is analysed across an individual season, with many farmers likely to opt for rain guns as they are familiar and fairly easy to maintain.

However, with water scarcity seeming inevitably increasing in the longer term, and rising up the regulatory agenda, they urge all irrigation users to take a look at the alternatives now, before they are faced with more stringent control legislation. 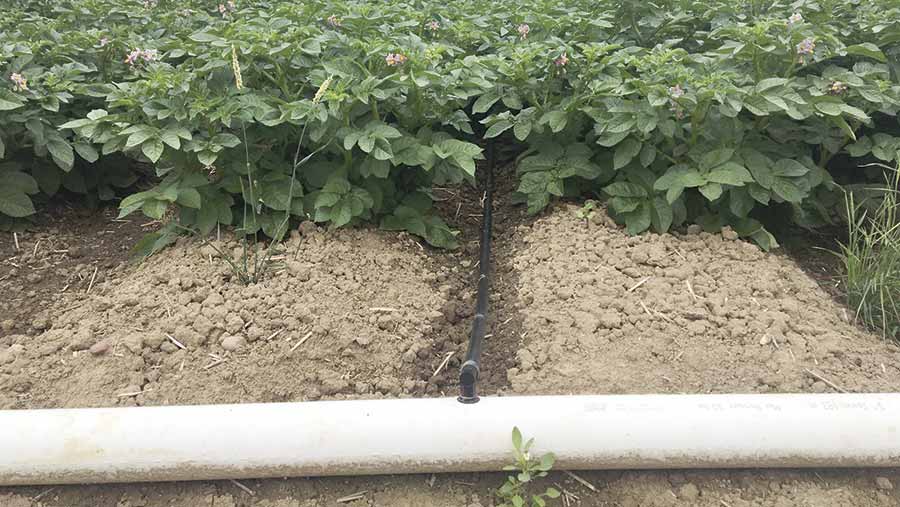 Maintaining potato production in the Midlands is crucial for the chipping sector, as the climate is ideally suited to producing a potato with the right chemical composition and characteristics for processed potato products.

That’s why preserving potato cropping in regions with higher water scarcity, such as Nottinghamshire, is preferable to moving their supply region to somewhere with better rainfall.

That’s according to John Sedgwick, UK raw manager for global potato processing giant Lamb Weston/Meijer (LW/M), which purchases all of J&J Burnett’s potato crop, along with the output of 30 other growers.

They produce 200,000t of frozen potato products annually in the UK for a variety of different high street retailers and restaurant chains, and have set an objective to halve their water usage per tonne of finished product by 2020.

Data from the company shows that it takes a total of 95 litres of water to produce 1kg of processing potatoes, with irrigation taking 40 litres of water from rivers, lakes and groundwater.

Mr Sedgwick explains that the company is eager to use innovative techniques such as drip irrigation to promote sustainable water management in order to facilitate access to safe water in water stressed regions and contribute to global food security.

And while farm manager Matthew Smith and assistant farm manager Tom Burnett say they are predominantly investigating drip irrigation for its water-saving and yield-increasing potential, there may be other benefits as well.

They say it could be an avenue for delivering fertiliser straight to the root, a process known as “fertigation”, as well as reducing pressure on soil structure and keeping canopies drier to reduce the risk of blight invading leaves.

It is hoped that fertigation will increase yields further by delivering liquid nitrogen directly to the rooting zone, reducing the risk of both run-off and evaporation.

This year they delivered 30% of the liquid fertiliser to their commercially drip irrigated crops via the irrigation tape as it was a dry season and they had no rain gun to wash the fertiliser in post-application.

Large projects in England that improve water resource management are eligible for 40% grant funding to help purchase best practice application equipment such as boom and trickle irrigation systems, and build larger infrastructure such as reservoirs.

The funding is available through the Rural Development Programme for England Countryside Productivity Scheme and the deadline for applications is 3 April 2018.

Only arable and horticultural businesses growing, or intending to grow, irrigated crops can apply for the water resource management grants and water metering needs to be in place to monitor water consumption.

Grant applications will be scored against how closely they match the funding objectives set out by the Rural Payments Agency, and then ranked against other applications, with only the top-scoring applicants being successful.

Funding will be paid only once the project has been completed, so businesses will have to sustain the full cost of the job before they get the money back in, and grant agreements need to be in place before work on the project begins.