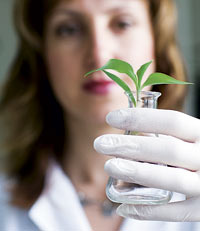 Herbicide and drought tolerance, disease resistance and better oil profiles could soon be introduced to arable crops without the need for genetic modification, according to a Californian biotechnology firm behind a new breeding method.

The technique, developed by San Diego-based Cibus, makes targeted changes in genes to produce advantageous agronomic traits. Crucially, it uses the cell’s own DNA, with no genetic material being added from other sources.

That, according to the firm’s president, Keith Walker, sets it apart from genetic modification, and US regulatory auhorities have already recognised this. If Brussels follows suit and exempts it from EU GM regulations, that could pave the way for many GM-type traits to be introduced into Europe.

The technology is faster than both conventional marker-assisted and transgenic breeding, the firm claims, speeding programmes by three to four years.

Herbicide tolerance is one of Cibus’s first targets, though Dr Walker insists the firm is chemistry-neutral. “We represent the farmer’s interests, which makes us different from an agchem company that owns the chemical.”

Cibus develops the traits, then sets up a partnership with plant breeders or agchem firms to bring them to market.

Herbicide-tolerant products are being developed in North America and Europe. “I expect an announcement in the next few weeks of the first products, with introductions of varieties in North America within two to three years. The technology is there, it is now in the hands of the plant breeders.”

The technique should allow the development of a range of crops tolerant of other actives, not just glyphosate, he says. “Repeated use of glyphosate within a rotation encourages resistance, so the best solution would be to rotate the chemistry from year to year. We see real opportunities, other than glyphosate, to help farmers.”

Every time a cell copies DNA, it makes “spelling mistakes” in the genetic code. These errors happen all the time, which is how natural variation occurs, Dr Walker explains.

“But nature doesn’t want uncontrolled mis-spelling, so it has a system that inspects the DNA and makes repairs.”

Cibus’s technology controls the cell’s own repair system, directing enzymes to change the targeted gene to produce a desired trait. The technology is so specific it is equivalent to changing a single letter in a word within a large book, he claims.

“Essentially it is the same as natural variation. But in nature it is truly random, and most changes are not helpful. Our technology can create changes that are very targeted. You can make a change that might take nature a thousand years to do, or, indeed, never make.”