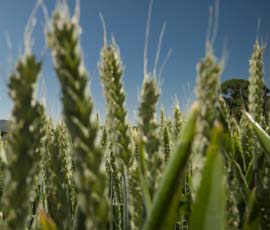 The NFU is forecasting that the English wheat crop could be around 2m tonnes or 15% down on the five year average.

The union surveyed members between May and early June to ask about the impact of one of the driest springs on record.

The survey, published on the opening day of Cereals 2011, showed that wheat and oilseed rape yields are likely to be significantly down on the five year average,

Results suggest that average English wheat yield in 2011 will be down by 14 per cent to around 6.5t/ha, which would rank among the lowest since the late 80s.

The area planted is currently thought to be similar to last year.

Winter oilseed rape appears to be in a slightly stronger position than for cereals, with farmers forecasting English yields at 3.1t/ha, nine per cent down on the five year average of 3.4t/ha.

“With the east of England experiencing its lowest rainfall for the first half of the year in over 100 years, farmers are clearly concerned about the impact on the ground of this abnormally dry spring.”

The survey involved farmers from the East Midlands, East Anglia and South East, where spring weather conditions have been most extreme.

To arrive at a national weighted yield figure, the NFU has assumed similar yields to 2010 for the remainder of England.