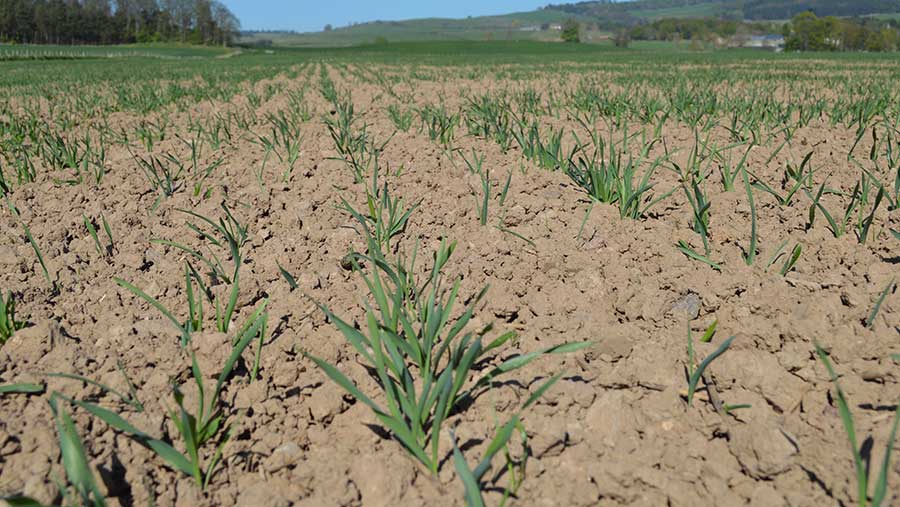 Submitted photograph please DO NOT REUSE

The lack of rain is putting spring-sown crops under pressure in the Scottish Borders after very few April showers and a dry forecast for early May.

This is a generally dry area with rainfall levels similar to East Anglia, sheltered from the prevailing winds by the Cheviot Hills, and the lack of rainfall has hit some spring barley crops hard.

Neil Thomson, farming five miles south of Kelso, says his spring barley is starting to struggle while seed-beds are difficult to prepare for his May-sown broccoli and cauliflower crops.

See also: Drought could slash crop yields by up to 50%

After a wet March, the weather turned very dry the following month making cultivations difficult and some spring malting barley is in desperate need of rain.

He farms about 600ha of predominantly light and medium loam soils at Caverton Mill, growing combinable crops and brassicas.

Just across the border in north Northumberland, Peter Jeffreys is hoping for rain to help a 50ha block of spring barley grown on some very light land by the River Till.

He is growing spring barley for the second successive season following cover crops and sheep grazing, aimed at helping improve the soil structure and fertility on the river-side land on his 400ha farm at Kimmerston, five miles north of Wooler.

Mr Jeffreys says these light land fields are very susceptible to dry spells, and the crops need some rain soon, although two winters of cover crops and sheep grazing appeared to have helped the soil structure.

One grower more relaxed about the dry weather is Rod Smith on the Northumberland coast who broke the world wheat yield record in 2015 with a crop of 15.42t/ha.

Wheat crops on his deep heavy silt soils leading down to the causeway over to Holy Island look well with little sign of moisture stress and low disease levels.

He is looking to improve the sustainability of his arable operation by introducing grassland into his rotation on his 400ha Beal Farm, 10 miles south of Berwick-upon-Tweed.