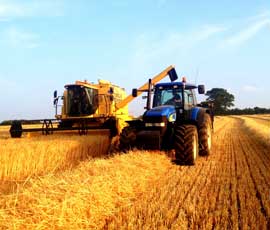 Harvest may have started about two weeks later than normal, but by Tuesday (30 July) farmers had cut about 10% of their winter barley and 5% of their oilseed rape.

According to the first HGCA / ADAS harvest report of the year, the first winter
barley was harvested around mid-July, which was 10-14 days later than normal. “However, harvest only started in earnest in the last few days of the month,” it said.

Most progress had been made in the East, South East and South West, with some small areas cut further north and west. “Yields from earliest winter barley crops are close to farm averages, but oilseed rape yields are more variable.”

Winter barley yields so far were averaging about 6.3t/ha, ranging from 5t/ha on light soils to 10t/ha on more water-retentive land. “Secondary tillering is a widespread problem in more open crops and patchy areas, which could require pre-harvest treatment,” said the report. “Early indications are that specific weights are reasonable, with early results ranging from 64-70 kg/hl.”

The warm and sunny weather had been beneficial in terms of grain fill, although some crops on lighter soils had suffered from moisture stress, said the report. A very small amount of winter wheat had been harvested in parts of the South West, but typically on light land where crops had died off. Yields so far averaged about 7.7t/ha.

“The start of main wheat harvest is still seven to 14 days away for most farmers in the South, with crops in the North later still. Weed levels are high in some crops, particularly where blackgrass was poorly controlled in the autumn.”

Weed control was also poor in many oilseed rape crops, due to lack of crop competition and late weed germination, it added. Harvest was later than in any recent years, and crop maturity varied widely due to poor establishment and subsequent late branching and flowering. “The harvest period is expected to be extended this year.”