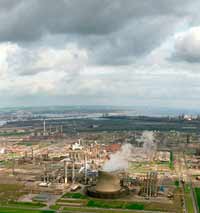 Bioethanol production at the Ensus plant on Teesside has increased considerably in the three months since it came on stream.

The plant is processing up to 135t of wheat an hour and operating at around 80% of capacity, according to chief executive Alwyn Hughes, speaking at the recent International Grains Council conference in London.

While consistent performance at full capacity had not yet been reached, he said the original projection for it to use 1.2m tonnes of wheat a year still stood.

Glencore‘s Nick Oakhill said up to 3000t of wheat a day was being delivered to the plant and the firm was exploring alternative means to road transport for some of the Ensus intake.

Mr Hughes said the plant would produce around 350,000t a year of dried distillers’ grains for the livestock feed market. This offered Europe the opportunity to become more self-sufficient in protein animal feed and would raise some challenges for crops imported from outside Europe, he said.

By replacing soya initially in ruminant diets, the DDGs offered the opportunity to cut the carbon footprint of meat production. Carbon reduction from the feed was on a similar level to that offered by fuel from the plant, he said.

A short shutdown at the Ensus plant is planned for the end of June to allow work to double the height of a chimney stack from 40m to 80m after complaints about odour from the plant.