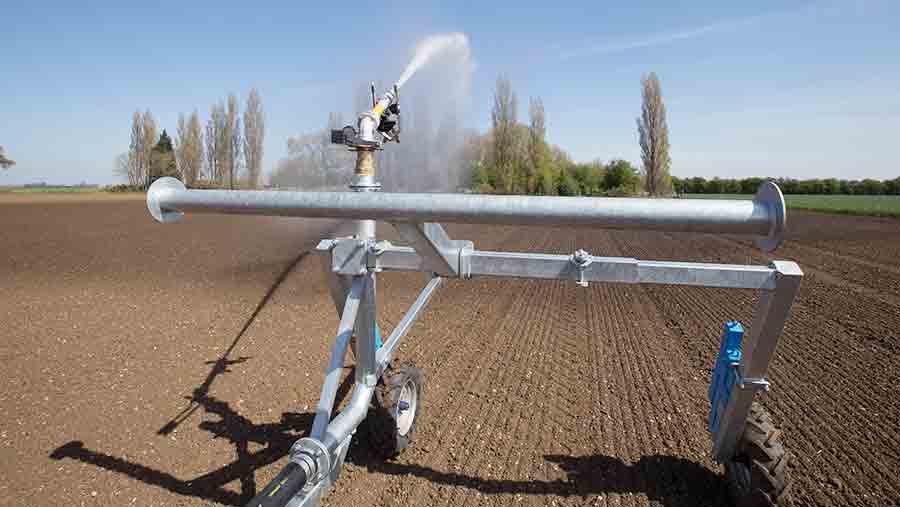 Some farmers are being forced to irrigate crops as the dry spell continues, with concerns that up 50% of crop yields maybe lost in wheat if the drought is prolonged.

The average rainfall in England is down to 7.6mm this April, compared with 66.8mm last April, with farmers across the country enduring the driest April to March period since 1995.

Andrew Blenkiron, who farms on light, sandy land in Suffolk is used to dry conditions, but concerns are growing for unirrigated crops.

“We have 1,400 acres of irrigated crops and we have plenty of water for them because we have two reservoirs,” he says.

However, Mr Blenkiron’s farm has seen only 125mm of rain in five months and he worries that his unirrigated crops will face a 20% penalty if there isn’t significant rain soon.

“We are back to where we were in 2011 – we didn’t see any rain until the middle of June and that took 30% out of our cereal crop yield,” says Mr Blenkiron, who has 1,500 acres of cereals that are unirrigated.

Mr Blenkiron has noticed that several farms, including his neighbour, have begun irrigating crops.

Antony Redsell, who grows wheat, onions and hops in Kent, is also worried about the dry weather.

“Wheat on light land is stressed, it does need rain and we are seeing more disease than we expected as a result,” said Mr Redsell.

Although he has no plans to irrigate yet, he is hoping for substantial rainfall soon.

“It is still early, we’ve still got time. It isn’t May yet, but if we were talking at the end of May it would be a different story. I am cautiously optimistic,” says Mr Redsell.

Guy Smith, NFU vice-president and Essex farmer, had 10mm of rain in March and only 5mm in April on his farm, which is officially the driest in the UK.

Mr Smith says he could lose more than 50% of his crop if weather patterns don’t return to normal for May and June.

He is also worried about fertilisers not being washed in and spring crops failing to fully emerge.

“We are getting on with it,” says Mr Smith. “We don’t have enough water to irrigate, but my neighbour is irrigating sugar beet and spring barley.

“I’m worried now, but my dad always used to say it was a dripping June that puts your farm in tune. All we want is normal weather patterns.”