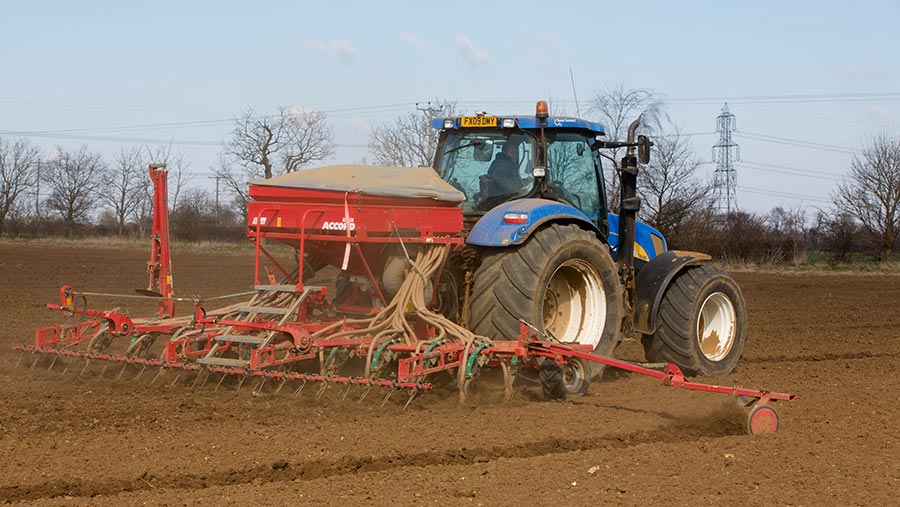 Arable growers across the UK could suffer from lower yields this harvest as a result of the recent cold and wet weather pushing the spring drilling season later than first hoped.

The so-called “Beast from the East” brought large quantities of snow to many areas of the country, already suffering from a soggy start to 2018.

This has had a knock-on effect for some farmers, who have been unable to venture into their fields with machinery to sow a number of spring crops, or to apply nitrogen fertiliser to those fields sown late last year.

Andrew Ward, who farms 650ha at Glebe Farm, near Leadenham in south Lincolnshire, is yet to begin his 2018 drilling, despite the fact that 50% of his farm is now spring cropped. Due to the wet conditions, he has already conceded it will be into next month before his seed drill gets into action.

“We have a vast number of spring crops to sow, but unfortunately it won’t be this month because the ground is simply too wet. Hopefully we’ll get under way at the start of April,” he said.

Mr Ward explained that he is not too concerned at this stage, acknowledging that many farmers will be in a similar position. He was quick to see both the positives and negatives of the situation.

“We have to realise it’s likely to be a later harvest and yields could well be cut, but on the other hand from our point of view, the later sowing period will benefit our blackgrass policy and we may be able to cut costs in terms of our herbicide use”, he added.

Thomas Bradshaw is in a similar position with the 1,600ha of land he manages in Essex. Having had 147mm of rainfall already in 2018, this is second-wettest start to a year in the past eight seasons.

“The soil is incredibly wet – as wet as it has been all winter. We have 12-14 full days of drilling to do, so we’ll need a fair crack at it. On top of that, there is still no fertiliser or nitrogen on our winter crops, so we’re wanting to crack on now,” he explained.

However, the message from Christine Lilly, a Lincolnshire-based agronomist for advisory group Frontier, is to not panic and certainly don’t force things.

She said: “Those with lighter soils should be in a better position to get on soon, but heavy land could be an issue, taking a long time to dry out. It’s important not to rush things. Drilling into wet ground will produce a very wet seed-bed, which will result in poor establishment and subsequent rooting.”

Ms Lilly went on to explain that it is not too late yet, and with warmer temperatures, crops should germinate quickly after drilling.

“With decent weather, it’s amazing how quickly it could come away,” she added.