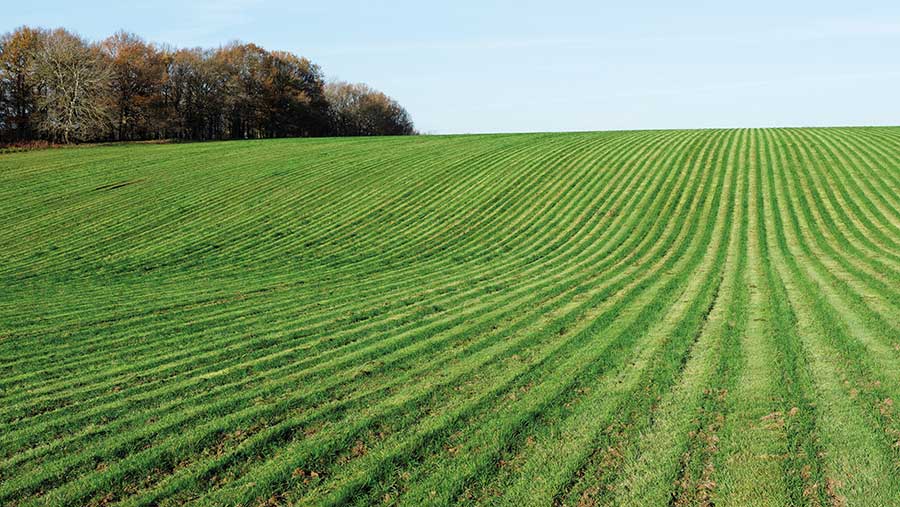 Drilling crops into a permanent living mulch is the holy grail for organic growers and a system developed in the south-west of France now gaining ground in the UK.

Andy Cato created an innovative cropping system with the aim of repairing his soils, which had been degraded from years of continuous maize growing.

The organic matter content of the clay soils was only 0.5% when he bought the 110ha farm, in Gascony, 13 years ago after a successful music career.

In the early years, the non-plough organic arable operation was not working as the soil was so degraded, he recalls.

Inspired by Albert Howard’s An Agricultural Testament, he incorporated livestock and herbal leys in an attempt to turn things around.

The herbal ley is based on Frank Newman Turner’s original mix, which is grazed by Sussex cattle, as they can thrive on a 100% grass diet. Mr Turner was a British pioneering organic farmer.

Mr Cato rapidly saw good results, with the mob-grazed leys helping to clean up the weed problems and improve biodiversity.

The speed of regeneration under pasture led to Mr Cato’s idea of sowing annual grains into grass, as he wanted to avoid ploughing up the leys.

His system is based on growing wheat within a living herbal ley, a mix of annual and perennial cropping in the same field. This produces a diversity of different rooting depths and helps soil biology.

A key challenge was how to establish a cereal crop directly into pasture. First attempts – direct-drilling the wheat into the ley with no disturbance of the grass – were based around the competitive nature of old, long-strawed varieties of wheat.

He recalls early attempts that looked great for a while after being drilled in the autumn.

“But in the following spring, it didn’t look good,” he says. The crop became swamped by the ley.

Next, he tried grazing the wheat/herbal ley heavily up until growth stage 31. This began to yield some good results.

The system has been reimagined in order to work at scale, using an inter-row mower to regulate competition from the ley.

To facilitate mowing, the system was conceived using wider row spacings of 75cm. Early sowing of the wheat to encourage tillering helped to compensate for the wide spacings. 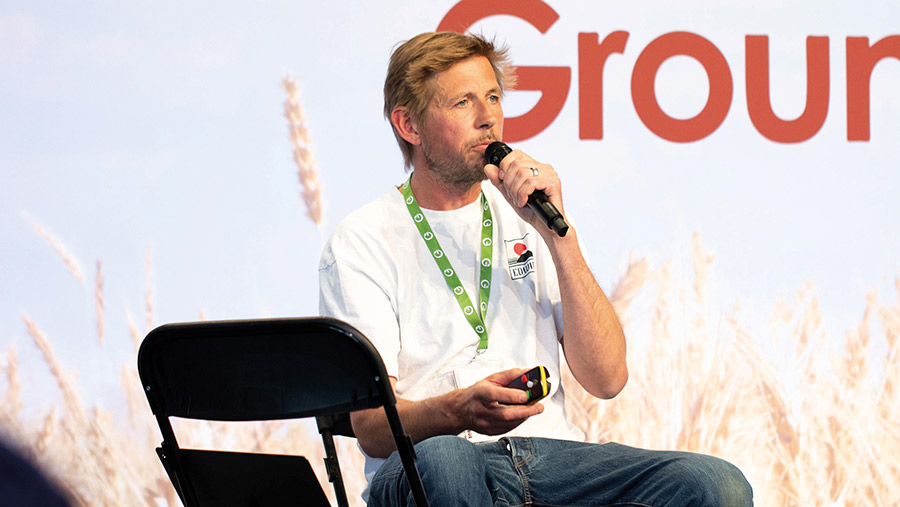 RTK has allowed these spacings to be modified due to precision mowing. The system can now work with direct-drills such as the Horsch Avatar or Weaving.

Drilling is carried out with a strip-till/grain drill combination. The field can be grazed until growth stage 31, and then mowed between the rows with a machine based on kit used by vineyard growers. He can mow at 8kph using RTK guidance.

The result is that 57% of the field is a perennial herbal ley and 43% is a wheat crop. Yields are typically 40% of conventional, which is in line with organic yields in that part of France.

By combining wheat, multispecies permanent pasture, high-density grazing, compost teas and biostimulants, it is estimated that the system can build soil organic matter by 0.1-0.2% every year. This would equate to sequestering 8-17t/ha/year of carbon dioxide.

This spring, Mr Cato took on a 295ha National Trust farm, having secured a 20-year lease on part of the Buscot and Coleshill Estate in Oxfordshire.

He admits grass growth will be greater in the UK than in the south of France, but he believes this can be managed with extra mowing passes if required, and the new tighter spacings will increase shading.

The flour is freshly stone-milled to retain its essential nutrients and nutty flavour.

He says that by buying Wildfarmed, consumers can help in the restoration of farmland via the purchase of 100% traceable food, grown by farmers who have adopted a chemical-free, carbon-positive path.

Wildfarmed flour is used by a growing network of bakers, schools and restaurants nationwide.