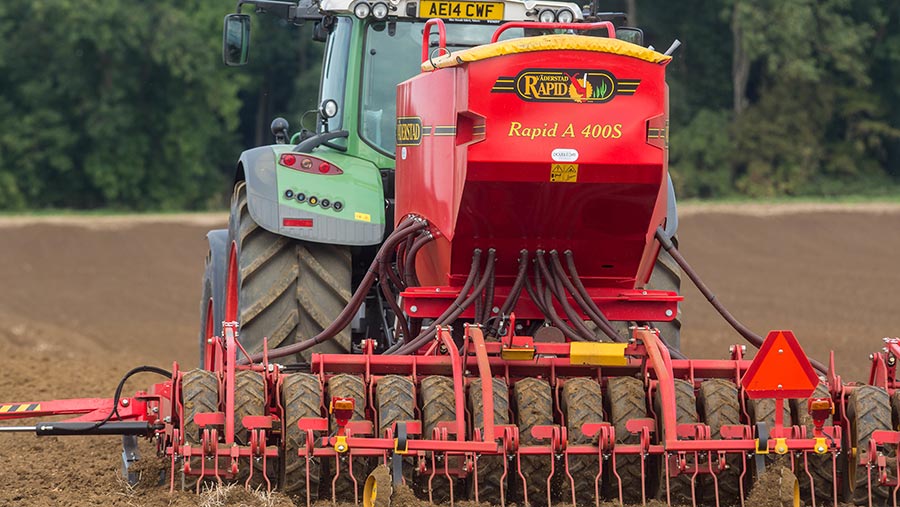 The vast majority of winter wheat growers plan to drill at the same time as usual, and are not tempted to sow earlier after last year’s wet difficult autumn.

Heavy rain at drilling time last year saw the UK’s winter wheat area shrink 24% to 1.268m hectares – the lowest for decades – and prompted fears many growers would drill early this coming season, to make sure they got a crop in the ground.

However, a survey shows nearly 87% of growers intend to drill at their usual time as they worry that early drilling will increase blackgrass problems, lodging, septoria disease and barley yellow dwarf virus.

The survey – conducted by agrochemical and seeds group Syngenta –  polled 40 UK wheat growers. It found only 7% looked to drill earlier than normal, with 6% to drill later.

“On the face of the results, it appears most growers are taking a sensible approach by resisting the temptation to drill early as a knee-jerk response to 2019’s washout autumn,” says the group’s seed and variety expert, Tracy Creasy.

She points out that this is a good approach to take because early drilling does increase the risk of all four problems that participants in the survey identified.

Nevertheless, a number of wheat growers are intending to drill earlier, and she says these growers will need to take extra care – beginning by growing robust varieties.

Of the winter wheat varieties to grow this season, mentioned in the poll, three out of the four most popular – Gleam, Graham and Extase – all have septoria resistance ratings of 6.3 or above on the current AHDB Recommended List.

“Choosing a variety with a good septoria tritici resistance is a good place to start whenever you drill, but especially if planning to drill early. What is also important if drilling early is choosing varieties that have shown only low levels of lodging,” she says.

Some 83% of the wheat growers that took part in the poll had seen their drilling delayed by a month or more by the wet start of the 2019-20 season or had been unable to drill, that figure fell by roughly half for growers of winter barley.