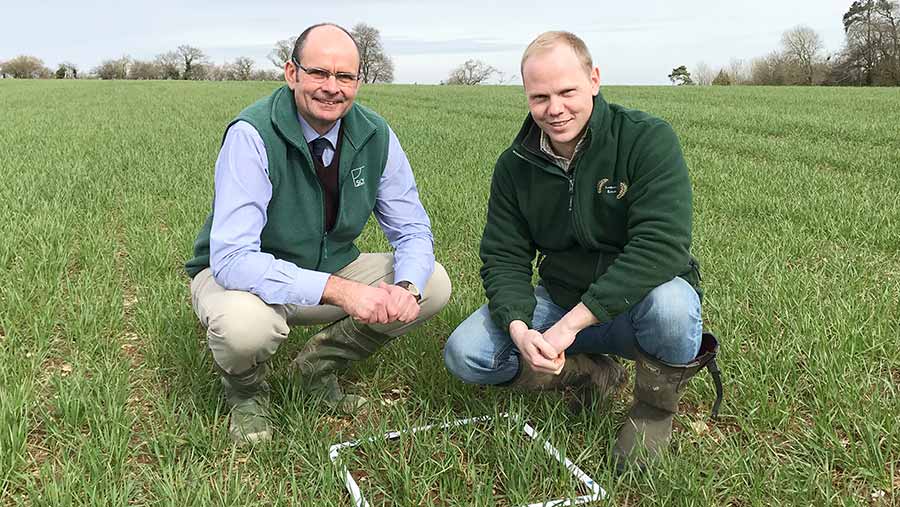 Farm manager Craig Livingstone is hoping to push wheat yields up to 10t/ha and beyond by establishing more consistent crops on his wildly contrasting chalk and clay Hampshire soils.

He is hoping to achieve this by varying seed rates across his fields according to soil type.

In the first stage of a three-year transition to variable-rate drilling across the whole 650ha of arable cropping, Mr Livingstone has varied the seed rate across his winter wheat area by as much as 25%, depending on soil type.

In the past, a flat seed rate resulted in too lush crops on the chalk ridges, creating disease hotspots and a lighter yield come harvest, while on his heavy clay soil, yields were held back by sparse crops.

His previous training as an agronomist has led him to bring in variable seed rates after just two years on the Lockerley Estate in East Tytherley.

While he is thinking about varying his growth regulator and slug pellet use, and already varies his P and K fertilisers, Mr Livingstone believes crop structure is the factor that will most affect yields.

He has, therefore, been working with variable seed rate specialist Soyl to map the farm into different establishment zones.

Winter wheat sown in early October has been drilled according to these zones, except for one field (Farm Hill), which was drilled at a flat rate.

The crop in this field will be compared throughout the season to a neighbouring field (Closters), which has been variably drilled.

Both fields have soils ranging from 2-23 on the Soyl scale, where 1 is a very light soil and 23 is the heaviest, across just 6ha due to a shared clay bar.

The expected rate of establishment varied between 55% on the heaviest clay and 80% on the lightest chalk across eight zones in the variably drilled Closters field.

Plant counts show a much more even rate of establishment across the differing soil types, allowing better use of inputs when they are applied at a flat rate.

In the variable field, 224 plants/sq m have established on the chalk, while clay areas have 244 plants/sq m.

The benefits of a more even crop include less disease pressure, less risk of lodging, better use of inputs and higher yields.

While the crop is more even, the plant count for chalk is lower than the ideal, so next year Mr Livingstone may increase the seed rate on the chalk areas.

The average wheat yield on the farm is 9.6t/ha, but this could be pushed up by as much as 0.4t/ha, says Richard Hales, area manager at Soyl, based on Soyl’s trial data.

This would result in an increase of at least £50/ha for Mr Livingstone at last year’s price of £130/t.

Some of this increase will come from pushing the existing better performing areas, but the key for Mr Livingstone will be how the tail end of his yields can be improved to give a more consistent crop and a better overall margin.

“The key question for me is if the clay area which is managed outperforms the non-managed areas,” he says.

“Variable rate drilling will increase the top yields achieved by a grower, and will certainly pull up the tail,” says Mr Hales.

But higher yields are only part of the focus for Mr Livingstone as he also grows for the top premiums, with 75% of last season’s barley being malting.

“If you can manipulate the quality of the crop and farm for the premiums, that is significant,” says Mr Livingstone. “We need to be growing a crop to better match our end markets, I can’t afford to downgrade.

“If a crop is grown as a milling wheat it needs to achieve that, if it doesn’t then it at least needs to be consistent in quality.”

Although the mapping only needs to be conducted once, and can also be used for other things such as targeted slug pellets, the results need to justify the investment.

While wheat should see an improvement, he expects spring barley to provide the real return in investment as it does not have the same ability to overcome low plant counts by adding spikelets.

He is looking to improve on his two-year yield average for spring barley of 6.8t/ha, although the cold and wet spring conditions have so far hampered drilling.

Just 20ha of 185ha have been drilled so far with spring barley varieties Propino and Laureatte around a base rate of 360 seeds/sq m.

How are the variable rates determined?

A varied establishment map was created by variable seed rate service Soyl using an electrical conductivity scan, which measures both topsoil and subsoil for variation and moisture content.

This is followed by a depth of soil and stone fraction test by a soil scientist in the field to determine the likely effect of these factors on establishment.

From this a soil type map is created, which is combined with 10 years of trial data collected by Soyl to create the final establishment map.

Local knowledge is essential for factors such as blackgrass hotspots and soil situation to be taken into account and the seed rate adjusted accordingly.