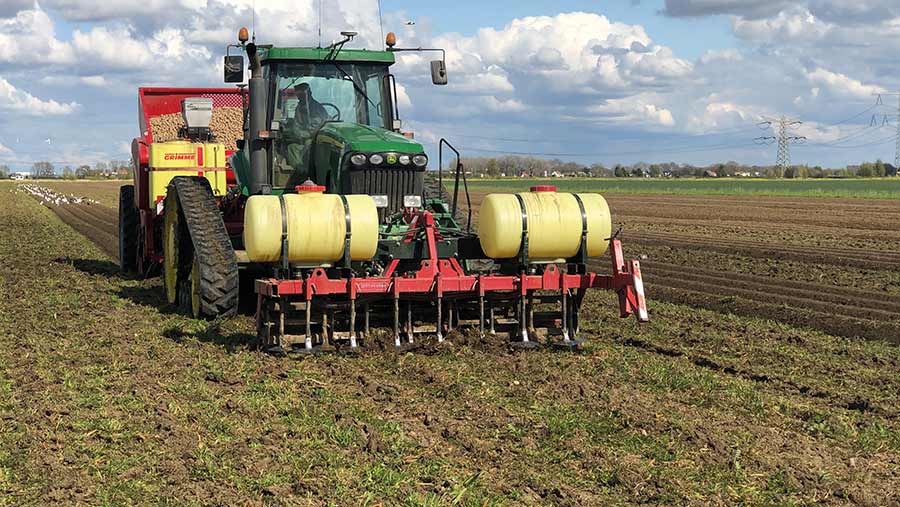 Growing potatoes with excellent taste characteristics was the starting point for Jeroen Klompe’s eight-year journey to improve his soil, and his management of it within a potato rotation.

“We wanted to grow a potato on the farm that had such good taste that the children would ask their parents for extra potatoes,” Mr Klompe says.

To grow potatoes with real taste, he says you need three things – excellent soil, the right variety and to feed the plant correctly.

“These three things together made us realise we needed to improve the quality of our soil, avoiding soil compaction and increasing aeration.”

A key step has been the adoption of a 3.08m working width controlled-traffic farming system, so crops are never sown where machinery has trafficked.

But preparation for potato crops starts straight after the previous wheat crop. The straw is chopped and mulched, and organic fertiliser – either compost or solid manure – applied.

If any remedial work is required for the soil, such as drainage maintenance, it is carried out at this point, while the ground is dry.

As soon as possible after harvest, a cover crop is direct-drilled. “A good cover crop is as important as a cash crop,” says Mr Klompe. “If you know what the problems are in your soil, you can select the right species in your cover crop mix to tackle them.”

For example, flax is extremely deep rooting to help with soil structure, while improving mycorrhizal fungi levels in the soil means avoiding high levels of brassicas.

“We use those good for producing biomass to cover the soil during the winter, in combination with nitrogen fixation and soil-restoration species.”

Typically, that ends up being between 8 and 15 species, including buckwheat, flax, various radishes, mustard, rye and oats.

The cover crop is mulched and cut before the potato crop is then planted directly into the cover crop residue in the spring, in a one-pass system.

“A rotator mixes the cover crops and the upper surface of the soil, so it’s mulching and mixing the top layer of the soil. Then, after the potato seed tuber is planted, we directly make the ridges in one action.”

The system is being used on about half of Mr Klompe’s potato area this season, as confidence increases in its use and resilience. “We’ve built up slowly from trialling about 5ha five years ago.”

Compared with a more conventional system, there is a much bigger water-holding capacity when incorporating cover crops, he says.

“Soil is more wet in spring, so you have to wait at least one to two weeks before you’re able to plant. It does take a lot of patience, but it’s extremely important to wait for the right conditions.” 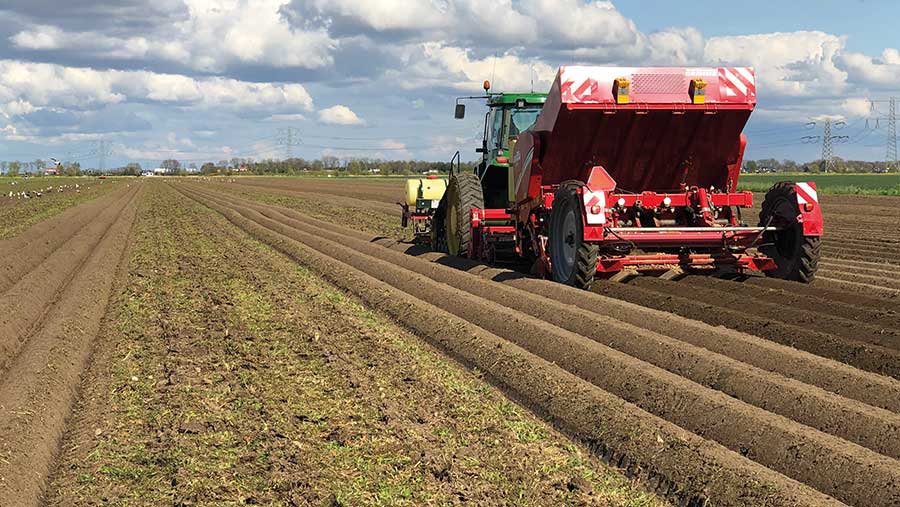 Both water and fuel use are lower in the system, but he is seeing more problems with slugs and wireworms. “We’re still in control so far – as long as it’s not reaching a level of more than 2% in our potatoes it’s OK.”

He’s hopeful that the problem is temporary. “Our agronomist says there will be a new balance with predators and then there will be a balance also with the wireworms and slugs. We need to be patient and not intervene.”

No insecticides have been used on potatoes for nine years on the farm, he says. “Around each field we have a margin planted with biodiversity mix, which is good for natural pest control.”

In a further tweak to the system, legume companion crops and buckwheat have been planted with the seed potatoes this season for the first time.

“The buckwheat provides extra flowers earlier, but the key reason for trialling the legumes, such as peas, beans and hairy vetch, is to have more natural nitrogen.”

Biofertilisers, made by fermentation on the farm, will also be used on a large scale for the first time this spring.

The use of biofertiliser, which make nutrients more plant-available, together with the legume companions should allow Mr Klompe to cut synthetic fertiliser use to just 25-40% of what a conventional grower would use.

Micronutrients are also applied as necessary following plant sap analysis by NovaCropControl, with one aim being to reduce the use of blight fungicides, as well as provide the correct nutrition for crop growth and quality.

Current reductions in blight fungicide are primarily driven by decision-support systems based on moisture sensors within the crop, weather forecasting and blight detection.

But he also hopes the use of the biofertilisers will promote a microclimate of good fungi and bacteria around the leaves, which will also attack the blight.

“In the system we are using, it’s not one thing – it’s the combination of lots of small things that makes the change extremely strong.”

He adds that the ultimate goal is to grow the same yield, which for his regular varieties is about £55-£60t/ha, but using fewer inputs.

“But we are learning that sometimes it is better to accept a slightly lower yield with a higher margin, than a higher yield and a lower margin.”