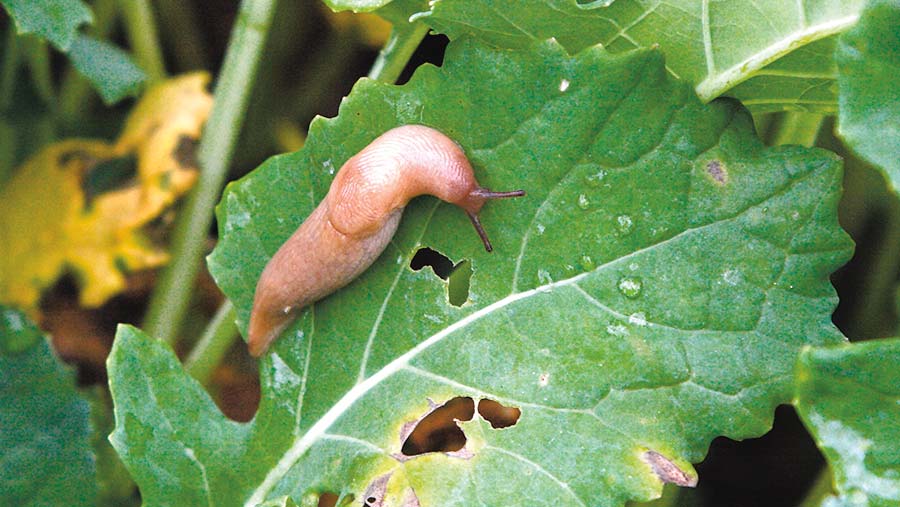 Slugs pose a major threat to many crops in all but the driest season – and with high field populations during 2016, this autumn is shaping up to be high risk.

While pelleting is an invaluable part of control, there is debate over whether it is worth mixing slug pellets with seed at drilling, either in addition to – or instead of – surface applications.

Some argue that placing pellets in the seeding zone encourages slugs and can potentially exacerbate problems; others – often those using reduced tillage or direct-drilling – want pellets close to seed when tilth is not easy to make and poor seed-to-soil contact is a risk, says soil expert Philip Wright.

See also: How slug-killer ferric phosphate is being used on farm

“There’s no one answer to suit all situations, as so much depends on the soil characteristics, type of crop and establishment method used,” he says.

The potential for attracting slugs towards seed is the main concern among those against mixing in pellets at drilling, especially for wheat at risk of grain hollowing.

Manufacturers also stress that pellets are developed primarily for surface applications and product labels generally do not advise admixing with seed, so this is at the grower’s risk.

“Admixing is often not restricted either, but check individual product labels carefully before you do anything,” says Morley Benson of pellet manufacturer Certis.

The grey field slug is the most common type and is predominantly a surface feeder, so there is limited benefit from sub-surface pellet applications, he says.

Surface applications after drilling and seedbed consolidation should therefore be the focus in most situations.

“It’s usually better to apply pellets after rolling; otherwise pellets tend to get pushed into the ground or broken,” he adds.

Simon McMunn, commercial manager at slug pellet maker De Sangosse, does not see any benefit from mixing pellets with wheat seed, and says grain hollowing risk could be increased if slugs are attracted to the bait and seed.

He advocates treating seed with Redigo Deter (clothianidin + prothioconazole) where grain hollowing is a risk.

In all crops, he recommends assessing slug risk with field trapping after harvest and utilising all available cultural controls, such as stubble/trash management and rolling, to reduce numbers before any pellet applications.

The “hassle factor” of mixing pellets with seed is also a concern for growers, especially those who don’t have the equipment to introduce pellets directly into the airstream on the drill and are instead reliant on bulk seed hopper mixes, notes Mr Wright.

Bulk mixes of pellets and seed can complicate drill calibration and may encounter problems with achieving a uniform mix that is maintained during drilling.

Most experts acknowledge that while surface pellet applications are preferred, there may be a case for mixing pellets with seed in some situations.

Mr McMunn says there could be some benefits from admixing pellets with oilseed rape seed, such as where seed is sown down the back of a cultivator leg.

In such cases, the moist drill slot potentially provides a route for slug movement, so there may be some benefit from placing pellets there.

Although rapeseed is not at risk from grain hollowing, placing pellets with seed could reduce pressure before plants reach the key cotyledon stage.

However, he urges caution when doing so and says particular attention must be given to drill calibration to ensure the right seed rate is sown and the correct amount of pellets is applied.

A variety of increasingly sophisticated systems are available to help growers place pellets with seed, many of which can be retrofitted to drills, says Rick Parker of slug pellet applicator manufacturer Stocks Ag.

“I wouldn’t advocate mixing seed and pellets in the bulk hopper,” he says.

The company’s Rotor Meter, for example, can introduce slug pellets into the main airflow of an air drill to be blown down with the seed.

Many systems for both mixing and broadcasting pellets are compatible with precision farming controls and Mr Parker reports growing interest in variable rate slug pelleting. 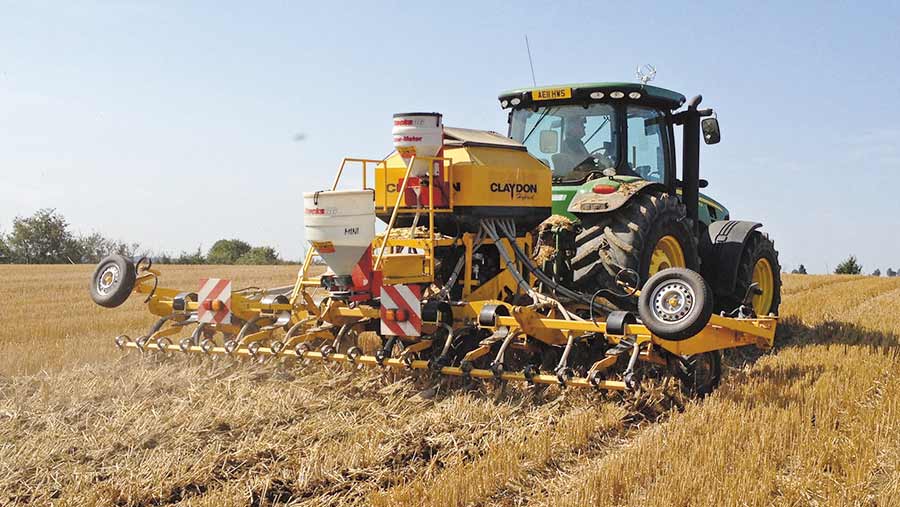 Essex grower Tom Bradshaw believes there is a stronger case for including slug pellets with seed when direct-drilling, compared with more traditional seedbeds.

“There’s a real difference between direct-drilling and cultivated seedbeds. We find that whatever direct-drill you use, it will create some sort of slot, channel or groove slugs can travel along.

“We’re not doing it on everything, but in high-risk situations, especially cereals after cover crops, applying a few kilos of pellets per hectare with seed is a no-brainer,” he says.

Mr Bradshaw assesses risk with field traps a fortnight before drilling and either pre-baits or includes pellets with seed, depending on pressure.

Mixing seed and pellets is done with a Rotor Meter unit mounted on his Cross Slot drill, with rates typically at 3kg/ha of 1.5% metaldehyde pellets.

He believes it reduces grain hollowing in wheat and helps stay ahead of slugs as crops emerge.

“We would mix pellets with oilseed rape seed, too,” he adds, “but we aren’t growing any this year.”