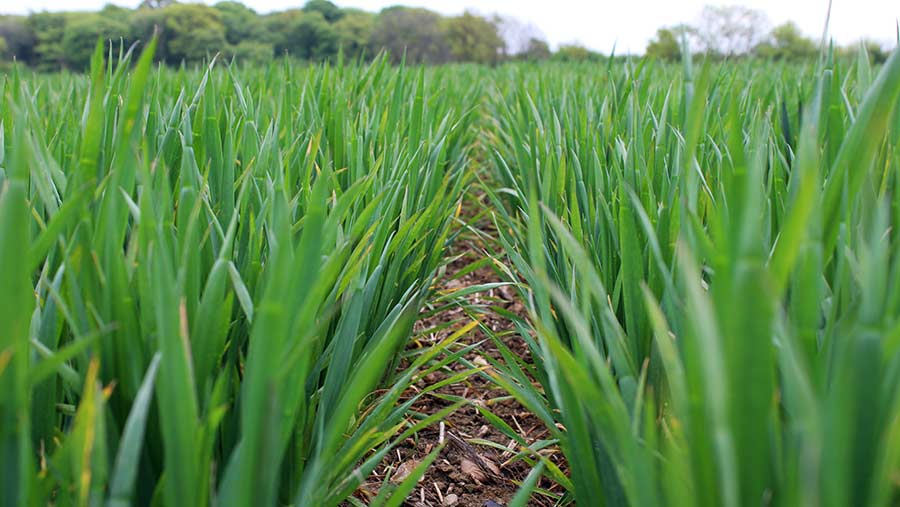 Bringing costs down without knocking yield is the principal aim for growers Christy and Hew Willett, who decided to phase out the plough and Vaderstad drill in favour of a bright orange Mzuri strip-till machine.

In doing so, their establishment costs have been trimmed from about £120/ha to £50-£60/ha, and they reckon there is more cash to save in future seasons, once soil benefits from strip-till flourish fully at Parklands Farm.

Ms and Mr Willett farm 475ha of combinable crops on part-owned and part-rented land, with the main farm on the edge of the village of Galleywood, a few miles south of Chelmsford.

The land they farm is scattered in a 10-mile radius of the farmhouse, sat on London/Essex clay soils that are  “good for brick-making”, jokes Ms Willett.

The family farm grows 225ha milling wheat varieties Crusoe and Skyfall as first and second wheats, respectively, with top-quality grain earning a tasty premium when delivered direct to local millers such as Chelmsford-based W H Marriage and Sons, which produces about 400 different types of flour.

Having Tilbury and Ipswich ports close by to put grain on a ship is another bonus of the farm’s location.

The Willetts have just been ushered in as the new AHDB monitor farmers for Essex and during their tenure they hope to focus on improving profitability in the wake of Brexit uncertainty, alongside soil and sustainability improvements.

“Exchanging ideas is so important. There was a time when your fellow farmer was seen as a competitor, but that’s not true now. We grow the same crops as each other, but we all do things differently,” says Ms Willett.

Autumn 2015 marked the start of the strip-till changeover as the Willetts decided to drill half of the farm’s area with the incumbent Vaderstad Rapid and the other half with a Mzuri Pro-Til strip-till machine.

Strip-till is a one-pass system that shallow cultivates and places the seed and starter fertiliser at a controlled depth.

Only a targeted strip of soil is cultivated where the seed is placed, leaving the crop residue on the surface between the tilled strips.

The idea is to help retain soil moisture and organic matter to improve the soil structure and fertility. 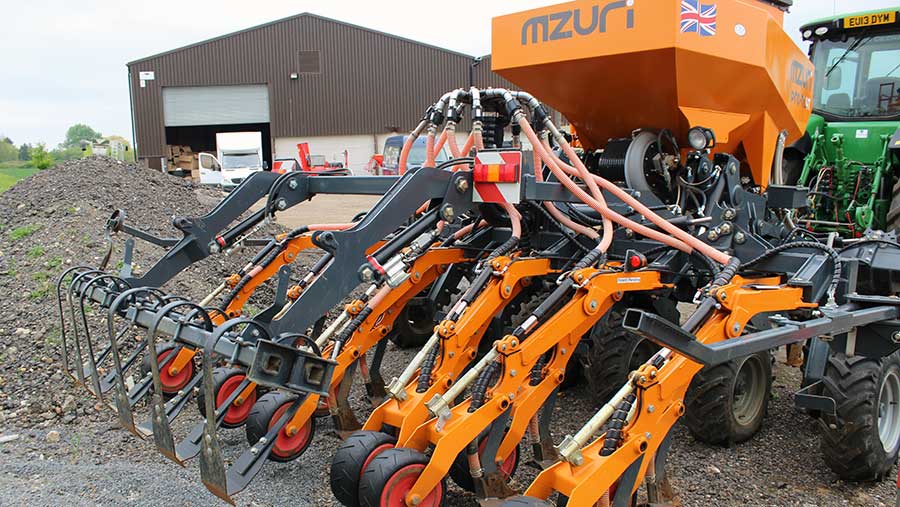 However, the Mzuri isn’t the lightest of drills to lug around the field, needing a tractor with at least 240hp to run it. As a result, Mr Willett burned about 20 litres/ha of fuel on average drilling 150ha.

“As our soil structure improves we hope to lift the leading tines on the Mzuri and change the coulter to one that has less resistance – this would also disturb the soil less,” says Ms Willett.

She is hopeful that going shallower, even by a few millimetres, will help reduce fuel costs further.

Some growers opt to go down the strip-till route as a halfway house on the journey to a full direct drilling regime, and this is something the Willetts are considering for the future to further slash costs per tonne of wheat produced.

“We won’t rule anything out at the moment and that is why we are doing the monitor farm project now, because we know that we might lose support payments in the future.

“So the hope is that the project and discussions will help us cope in a post-Brexit world,” adds Ms Willett.

Incidentally, their monitor farm launch event will be held on 23 June, exactly one year on from the UK’s historic vote to withdraw from the European Union.

The farm has areas of bad blackgrass and the efficacy of Atlantis (iodosulfuron + mesosulfuron) has withered in the face of herbicide resistance, but ryegrass is now becoming much more of an issue.

Mr Willett has a mental map of where blackgrass is at its worst and different levels of burden are tackled with either Liberator (diflufenican and flufenacet), Crystal (flufenacet and pendimethalin) or Avadex (tri-allate). 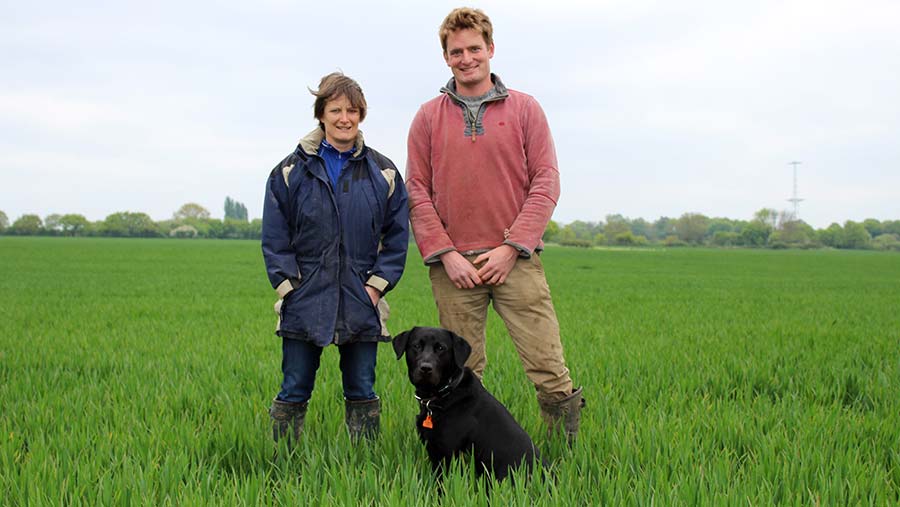 Blocks infested with blackgrass are put into spring barley, which the duo says certainly helps, but they recognise this isn’t the sole answer.

In fact, spring barley is taking over at the expense of the second wheat area to better spread the workload and the margins are routinely compared with milling wheats.

The plan is to eliminate blackgrass seed return and they have no fears about spraying off sections that are overrun with the grassweed.

“The strip-till drill doesn’t stir up blackgrass seed at depth, so any seed that is returned is on the surface and will have weaker rooting. Therefore it is easier to control effectively,” explains Mr Willett.

While they have seen good blackgrass control so far this season, they are not certain whether it is down to the change in establishment method and so are not yet confident in saying it really helps with control.

Oilseed rape should be the next crop in the ground for these areas, but the farm’s entire area failed in the arid condition of last autumn, so the jury is still out on whether this crop will make a return to the rotation.

Spring oats grown on a milling contract have filled the hole left by the rapeseed this season. This is a crop the Willetts have found to be easy and cheap to grow, while providing a take-all break and earning them a handy premium that trumps the milling wheat.

They are also giving 18ha of millett a go for the first time this season in their quest to find alternative break crops that make financial sense.

Strip-till is just one element of a wider approach to upgrade the fertility and structure of the soil at this family farm, in a bid to boost wheat yields from the current average of 8t/ha.

They have also entered into the Yield Enhancement Network (YEN) competition, run by crop consultant Adas, which has already thrown up some useful information about the state of the farm’s soils.

Testing revealed soil organic matter levels were better than expected at 4.6% and phosphate and potash levels were also good, prompting a move to a variable-rate system for these key nutrients.

With these vital signs in good order, Mr Willett is turning his attention to other factors that could help elevate wheat yields to double figures.

“I think we have to look at applying micro-nutrients. Our nitrogen could also be looked at, as well as our timings,” says Mr Willett. 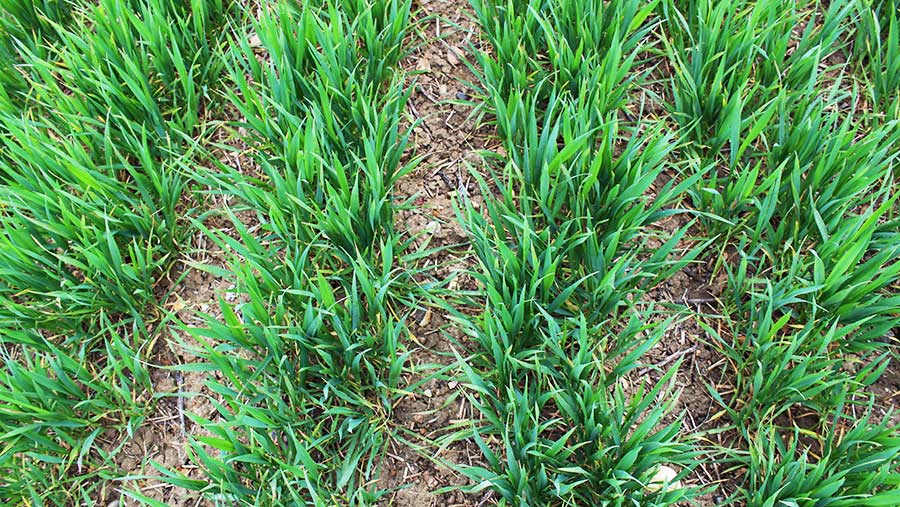 He feels that tinkering with rates, applying nitrogen earlier on in the season and trying applications of turkey muck for extra fertility may provide at least some of the answers.

Previous attempts at cover cropping using a vetch and oil radish mix to aid structure and fertility, with sheep grazing over the winter for added organic matter benefits, weren’t a clear-cut success.

While the mix of the fibrous vetch roots and the deeper-reaching taproot of the oil radish did help to improve soil structure, hopes of the cover crop working to dry the soil out weren’t realised.

“We found it doesn’t [dry the soil out] and can actually do the opposite, retaining more moisture, plus there was a lot of debris held over,” says Ms Willett.

Last spring they found that when drilling there was a hard cap, but soils remained wet further down the profile.

Ms Willett says they found strip-till establishment isn’t quite so straightforward in the spring as it is for autumn drilling due to the moisture levels.

This season a sub-soiler was deployed in the autumn ahead of spring strip-till drilling which helped improve the drilling process.