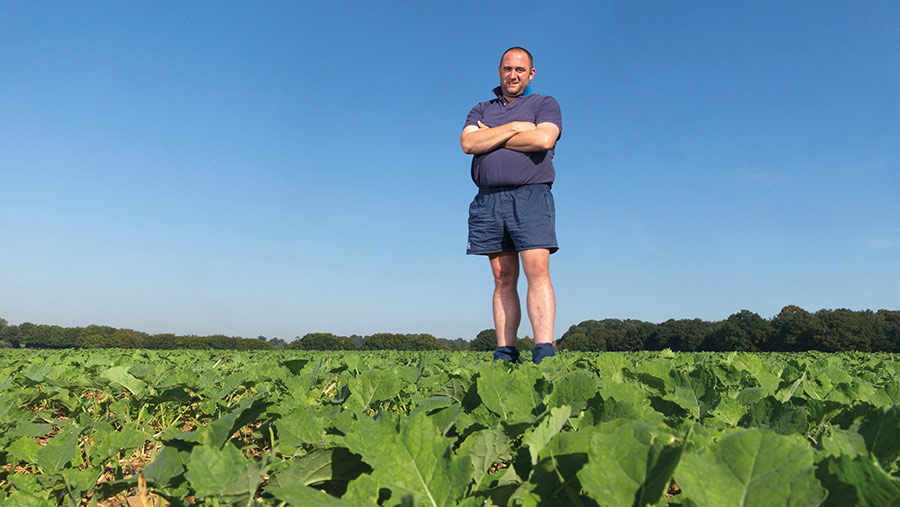 Oilseed rape is making a provisional comeback at Sandcross Farming, near St Albans, Hertfordshire, this autumn, after a three-year break from the crop.

For grower Jamie Burrows, NFU East Anglia Combinable Crops Board chairman, OSR’s better fortunes are only part of the reason for growing it again at the joint venture business.

The other driver is the unworkable situation caused by the Environment Agency’s latest guidance on using organic manures in the autumn, as part of the Farming Rules for Water.

With a digestate tank right in the middle of a 40ha block of land, oilseed rape is one of only two crops that are considered to have a requirement for autumn nitrogen, so digestate can be applied to it without any risk of pollution or prosecution.

“The digestate availability was a key factor,” says Mr Burrows, who set up Sandcross Farming with Will Dickinson. “If the land had gone into winter cereals, we wouldn’t have been able to use the digestate on it until the spring, when the conditions might not have been suitable.”

He also acknowledges that the cabbage stem flea beetle load on that block had been lowered considerably by the recent change in cropping, giving the oilseed rape a much greater chance of success.

“We hadn’t grown oilseed rape there for at least five years. If it had been any closer in the rotation, I probably wouldn’t have risked it.”

That gap, along with an early drilling date and the use of digestate, are working in the crop’s favour, he reports. The business has two 40ha blocks of oilseed rape, both of which followed winter barley and were drilled on 16 August.

“Two weeks after drilling, it had two leaves showing on most of it. Digestate, which some say repels flea beetle, also acts like rocket fuel and seems to keep the crop growing away from pests.”

He opted for the conventional variety Aspire, which was drilled at a seed rate of 3.5kg/ha following the application of 15cu m/ha of digestate.

Having used a Carrier for seed-bed preparation, he drilled with a Horsch Pronto on one block and a Horsch Sprinter on the other, matched to the conditions. With no shortage of soil moisture and plenty of warmth, the crop was up and away quickly.

Drilling in mid-August is some two weeks earlier than Mr Burrows used to do, but he has always set the drilling cut-off date in the August Bank Holiday weekend.

“Oilseed rape drilling has become earlier and earlier in this part of the country, which has been a real flea beetle hotspot in the past. At the moment, beetle numbers are very low.”

Slugs are also at low levels, with only one of the two blocks receiving pellets.

Having had a break from the oilseed rape crop, he is unsure about yield expectations. “We used to see yields getting on for 4t/ha where digestate had been used, so anything over 3.5t/ha would be good.”

The next stage is to deal with the barley volunteers, which will be done with an application of Falcon (propaquizafop). Other weed control treatments will be done much later in the year.

Given its promising start, Mr Burrows is cautiously optimistic about the crop. “It’s got a long way to go yet, but the crop’s first month has been much easier than the last time we grew it.”

Thanks to Corteva Agriscience for its sponsorship, which enables us to run OSR Future. Farmers Weekly had full editorial control of this report.

OSR is a vital part of the rotation and Corteva remains committed to helping deliver the tools to ensure the crop has a bright future with farmers.

This year has seen the commercial launch of Pioneer Brand PT303, the first winter OSR hybrid with a claim for sclerotinia tolerance. The latest AHDB trials results show PT303 has given the highest gross output of all Recommended List entries with a yield of 107%, and that was in trials that are fully protected against sclerotinia.

With an innovative R&D pipeline, fantastic varieties alongside proven crop protection products such as Belkar, Astrokerb, Kerb Flo 500 and Korvetto, farmers will have the tools they need to maximise the potential of their crops.