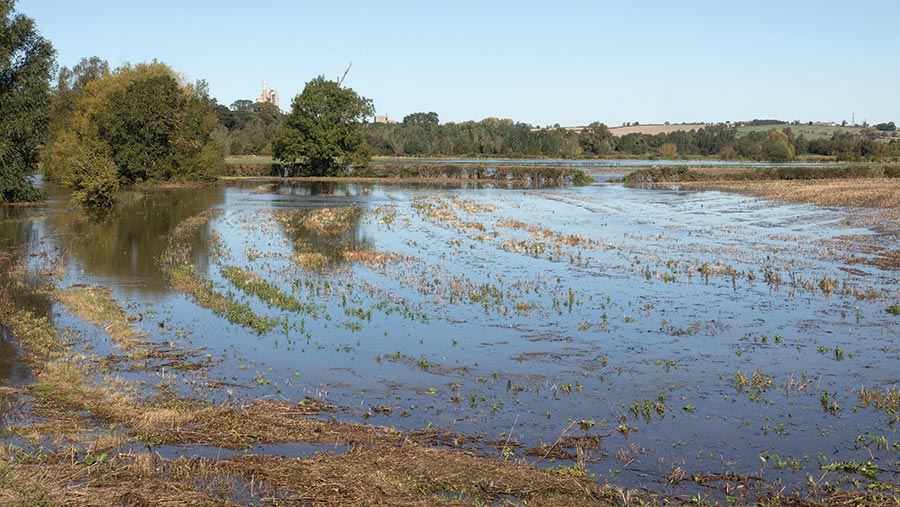 With unsettled weather still in the forecast, farmers and agronomists in the eastern side of the country are counting the cost of the exceptionally wet and mild autumn.

Met Office figures show that the UK as a whole had 62% of its normal 127mm of October rain in the first two weeks of the month.

Norfolk and Suffolk have fared the worst, with 101% and 106% of the anticipated monthly rain having already fallen by 15 October, followed by Lincolnshire and Yorkshire, with 94% and 85% respectively.

With the Met Office outlook for the next few days being “breezy and unsettled with more persistent rain in the North”, arable farmer Jono Dixon, in East Yorkshire, expressed frustration at the lack of progress so far on his tenanted farm near Hull.

“This time last year we were finished – all the machinery was washed down and packed away in the shed,” he told Farmers Weekly.

“Now, all the machinery is in the shed, but covered in sh*t and waiting to go.”

“I’ve got a customer waiting for the winter barley, but if it’s not drilled by the first week of November, it won’t go in at all.”

There was still plenty of time to get the winter wheat in, he added, and the fact he routinely ploughed meant his land had coped better and looked drier than some of his min-till neighbours.

Cloud burst .. No not a work of art from a spider its a gutter that can't cope with the torrent of water that's falling at the moment. Can someone turn the bloody tap off please. Torrential is an understatement pic.twitter.com/Gi56sNZSI5

Suffolk grower Mike Porter says he too is behind: “Normally, we aim to have finished by 7 October, but we’ve not turned a wheel for three weeks,” he said.

So far, just 50ha of oilseed rape has been drilled. With more than 200ha of winter wheat to go in, Mr Porter is just waiting for a dry window to complete the spraying, before linking up the drill.

“I’m glad we did not spray everything before this rain started, as we would only have to go in and do it again,” he added.

According to agronomist Sean Sparling, from Sparling Agronomy Services in Lincolnshire, there is still plenty of time and farmers should not be panicking yet.

“I am keen for my clients to delay until late October anyway, as that gives more time to control blackgrass and BYDV.

“Modern varieties of winter wheats are also fine being planted right up to mid-December, though winter barley should be in by the first week of November and, with many fields still with lying water, we may see some changes to cropping plans.”

Mr Sparling added that 40% of oilseed rape crops sown in August and September had now been torn up in central and north Lincolnshire, owing to severe cabbage stem flea beetle attack.

Looks can be VERY deceiving in OSR. Tell tale holes in the stems mean larvae probably in there already despite little or no adult CSFB activity, few seen in the crop and none found on sticky traps #justwhenyouthoughtitwassafe pic.twitter.com/nvBer7HhcJ

According to the Met Office medium-range forecast: “the unsettled theme is set to continue for a brief period in the North West, though there should then be some longer episodes of more settled weather, with bright and sunny spells mainly in the central, southern and eastern areas of the UK”.