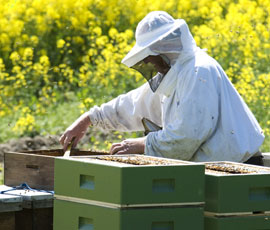 The two-year suspension will come into force from 1 December, following a European Commission vote in Brussels today (29 April).

The decision is a massive blow to farmers who rely on neonicotinoid pesticides to keep their crops, especially oilseed rape, clear of yield-sapping pests. Analysts have estimated a ban would cost the UK economy £630m.

Tonio Borg, EU health and consumer commissioner, said he would do his “utmost” to protect bees, which were vital to our ecosystem and contribute more than €22bn (£18m) annually to European agriculture.

“Although a majority of member states now supports our proposal, the necessary qualified majority was not reached,” he added.

“The decision now lies with the commission. Since our proposal is based on a number of risks to bee health identified by the European Food Safety Authority, the commission will go ahead with its text in the coming weeks.”

“Instead of banning these products, the commission should now take the opportunity to address the real reasons for bee health decline: disease, viruses and loss of habitat and nutrition.”
Luke Gibbs, Syngenta UK

Fifteen countries, including Germany, voted in favour of a ban, which was not enough to form a qualified majority, but enough for the European Commission to use its powers to impose a two-year restriction. The UK and Italy were among the eight nations that voted against the proposal. Four countries abstained.

The ruling means the use of three neonicotinoid active ingredients – imidacloprid, clothianidin and thiamethoxam – will be banned on flowering crops, such as maize, oilseed rape and sunflowers.

The decision to suspend the products follows the publication of a report by the European Food Safety Authority (EFSA) in January, which concluded they posed “a number of serious risks” to bee health.

Luke Gibbs, spokesman for Syngenta UK, which manufactures Cruiser OSR (thiamethoxam), said: “The European Commission has again failed to win the necessary support for its proposed ban on this vital technology.

“The ban has been wrongly presented as a silver bullet for solving the bee health problem.

“The proposal is based on poor science and ignores a wealth of evidence from the field that these pesticides do not damage the health of bees.

“Instead of banning these products, the commission should now take the opportunity to address the real reasons for bee health decline: disease, viruses and loss of habitat and nutrition.”

Bayer CropScience, which manufactures clothianidin and imidacloprid, said the ban was an “attack on technology and innovation” which would result in crop yield losses, reduced food quality and loss of competitiveness for European agriculture.

A company spokesman said: “Bayer CropScience remains convinced that neonicotinoids are safe for bees, when used responsibly and properly, according to label instructions.”

However, environmental groups welcomed the decision to suspend the use of the three products and hailed it as a victory for bees and common sense.

Emma Hockridge, Soil Association head of policy, said: “This is a victory not only for the bees and other pollinators, but for independent science against the political, pro-pesticide position adopted by UK Environment Secretary Owen Paterson and the pesticide industry.

“The European Commission and many European governments have reacted responsibly to the British and European scientific evidence showing clearly that a suspension is justified.

“Organic farming proves that systemic insecticides such as neonicotinoids are not needed to produce food.

“Also, there is strong evidence that a ban on neonicotinoids would work. In Italy, where the government has taken decisive action and banned certain neonicotinoids pesticides, deaths of honeybees in winter subsequently fell by more than 50% in three years.”

Friends of the Earth’s head of campaigns Andrew Pendleton said: “This decision is a significant victory for common sense and our beleaguered bee populations.

“Restricting the use of these pesticides could be a historic milestone on the road to recovery for these crucial pollinators.”

Mr Pendleton said that the UK government’s refusal to back restrictions on these chemicals, despite growing scientific concern about their impact, was yet another blow to its environmental credibility.

He added: “Ministers must now help farmers to grow and protect crops, but without relying so heavily on chemicals – especially those linked to bee decline.”