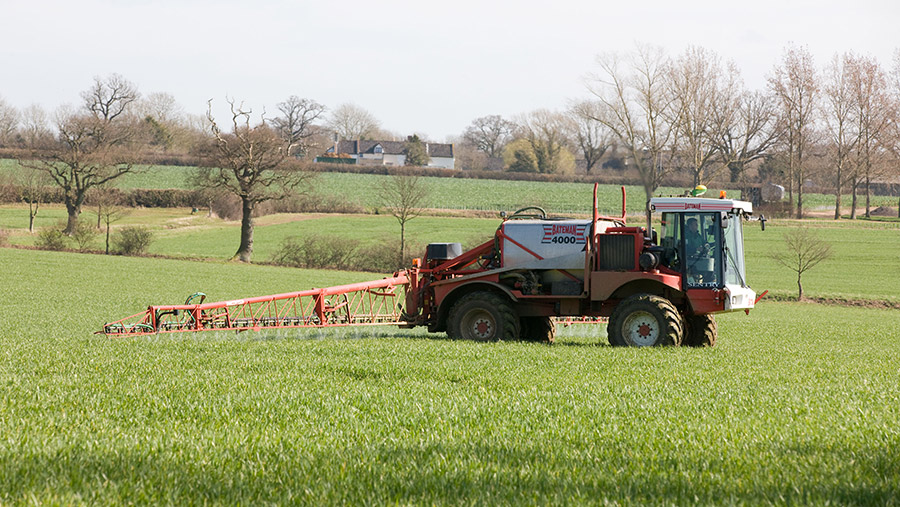 The EU has voted to ban the fungicide chlorothalonil – a move lamented by UK growers as “another hammer blow” for profitable arable production.

Member states of the EU’s Standing Committee on Plants, Animals, Food and Feed (SCoPAFF) voted to ban the fungicide on Friday (22 March).

Chlorothalonil is a key active ingredient for septoria in wheat and ramularia in barley and it is sold in various brand names, the most familiar of which is Syngenta’s Bravo.

See also: Analysis – what a ban on fungicide chlorothalonil would mean

It has been used in fungicide programmes in the UK and across the world since 1964 to control key cereal diseases in barley and wheat. The active is also used on a number of other crops, including potatoes, peas and beans.

Farmers Weekly understands that growers will have a use-up period for chlorothalonil up to 20 May 2020.

In a statement, the European Commission said: “The commission’s proposal for a non-renewal of chlorothalonil submitted to member states was endorsed by member states.

“The proposal is based on Efsa’s [European Food Safety Authority’s] scientific assessment which concluded that the approval criteria does not seem to be satisfied for a wide range of reasons.

“There are also serious environmental concerns, notably high risks are identified for fish and amphibians and great concerns are raised in relation to contamination of groundwater by metabolites of the substance.”

The NFU said it felt the commission had been overly precautionary in making its decision – and that it had failed to consider the particular importance of this active in the control of critical fungal diseases and in managing disease resistance.

“It plays a vital role underpinning control of fungal diseases in UK crops like barley, wheat, asparagus and narcissus. Without it there is a high risk of the rapid development of resistance to other fungicides.”

As a result, certain UK agricultural and horticultural production sectors will be put at significant risk, Dr Hartfield added.

He said: “Chlorothalonil is a good multisite product and a cheap form of protection. But its loss will only add more pressure on other actives. Critically, it slows up the pace of resistance we get from SDHIs and azole chemistry.

“It’s going to increase the cost of crop production. Everybody will be scrutinising what they are doing. It will be the death knell of certain wheat varieties.

“What we will do about barley, I don’t know. Presumably, there will have to be some genetic advances on ramularia in the future.”

Mr Willmott also pointed out that chlorothalonil is an important product for growers of peas and beans, and most notably is used for the control of chocolate spot on beans during poor summers.

A number of growers have taken to Twitter to vent their frustration over the ban.

Nottinghamshire arable farmer John Charles-Jones tweeted: “Sadly the withdrawal of plant protection products such as chlorothalonil, that is key to growing plentiful and healthy wheat crops, is seriously undermining our continued ability to do so.”

Wiltshire cereals grower David Butler tweeted: “RIP chlorothalonil; the foundation of cereal fungicide programmes since the 1960s. This will have a big negative effect on our arable COPs at the worst possible time.”

Chlorothalonil gone ??
Lost another great active. Fungicide programmes will be very different in the coming years.

Where will it stop ?

Really seems like there squeezing us into a corner we wont be able to get out.

The Irish Farmers’ Association (IFA) said the EU’s decision not to renew chlorothalonil is a “severe blow” for the Irish tillage sector.

A Teagasc report indicated where chlorothalonil is not available, there is the potential for a net margin reduction of more than 50% in wheat, and 65% in Irish barley production.

Grain farmers in Ireland have already experienced successive years of poor returns, which has resulted in a 20% reduction or 67,500ha in the total area planted to the main cereal crops over the past 10 years.