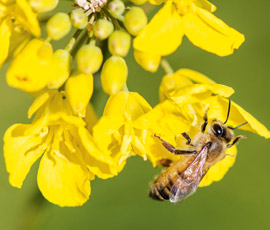 Europe needs an extra seven billion bees to pollinate its crops, with Britain in the poor position of having less than a quarter of the honeybees it requires.

The demand for insect pollination across Europe is outpacing the growth of honeybee colonies as farmers grow more oil-bearing crops like oilseed rape and sunflowers, and also fruit.

Researchers at the University of Reading said agriculture is increasingly reliant upon wild pollinators such as bumblebees, solitary bees and hoverflies for these crops.

They said the European Union’s biofuel policy, which encourages the growing of these oil-bearing crops, is making Europe more reliant upon these wild pollinators.

“If these wild bee populations collapse there would be nothing to compensate for them.”
Dr Tom Breeze, University of Reading

“If these wild bee populations collapse there would be nothing to compensate for them,” Dr Breeze told Farmers Weekly.

He suggested an increase in honeybees would offer more insurance for pollination, while farmers could encourage wild pollinators by leaving wild flower margins around their fields.

Dr Breeze said there is less than 25% of the honeybees we need in Britain for pollination, and there is little data on how good wild insects are at pollination.

This led him to suggest that oilseed rape yields might not be as high as they could be in Britain if honeybee numbers were much higher.

Europe as a whole has two-thirds of the honeybees it needs for pollination with a deficit of more than 13.4m colonies, or the equivalent or about 7 billion bees.

The university conducted its work between 2005 and 2010 across 41 European countries when there was a big growth in oilseed crops for use in products like bio-diesel.

In this period, European beehive colonies increased about 8% helped by rises in countries such as Turkey, but the demand for insect pollination grew five times as fast.

However, British bee colonies declined by about 5% during 2005-2010 continuing a population fall that has been seen since the 1980s.

Only Moldova, one of Europe’s poorest countries, has a bigger honeybee deficit than Britain, while Slovenia and Norway, with strong beekeeping traditions and restricted arable land, were the best for honeybee numbers.

The work, published in the US journal, Public Library of Science One, concluded that more than half of the 41 European countries including Britain, France, Germany and Italy did not have enough honeybees to pollinate properly the crops grown.

Further research at the university published last month showed that wild pollinators such as bumblebees and solitary bees are just as effective pollinators of oilseed rape as honeybees.

The research team also concluded that insect pollinators added £37m a year to the value of just two varieties of British apples, Gala and Cox, by increasing fruit yield and quality.

The EU introduced a ban on neonicotinoid insecticides, used in seed treatment for crops like oilseed rape, at the start of last month in an attempt to improve the health of bees.