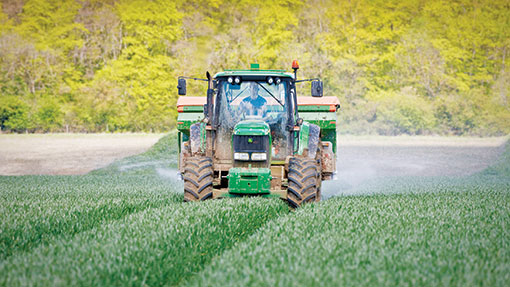 After a wet winter trying to assess the nitrogen needs of winter wheat is set to be harder than usual this spring. David Jones investigates.

Splitting nitrogen dressings and keeping an eye on the weather is vital in raising the efficiency of fertiliser use and boosting wheat yields.

Average take-up of nitrogen fertiliser by winter wheat is only 60%, but trial work shows this can be pushed towards 80%.

The key is to avoid big doses of nitrogen fertiliser, hold back in heavy rain or drought, and remember that nitrogen timings can be flexible.

Peter Barraclough, crop physiologist at Rothamsted Research, explains big doses of nitrogen fertiliser are more at risk of losses and are recovered with less efficiency than small doses.

“The more splits you make the more nitrogen will be captured by the crop and the recovery figure may move towards 80%,” he says. 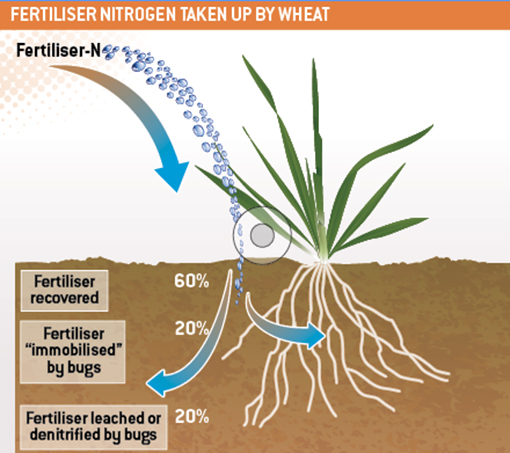 Dr Barraclough encourages growers to be flexible and to split nitrogen applications as wheat roots can only take up nitrogen at a certain rate.

The range of nitrogen recovery efficiency varies from 40-80%, with the average at 60%, so anything that can push the rate higher will help boost yields and limit losses.

He says excess nitrogen will only be leached, locked up in the soil or lost through de-nitrification into gaseous nitrogen rather than being used by the crop.

“There is no way a wheat crop can take up 200kg/ha at one time. Don’t apply large doses when it’s cold or during heavy rain or drought,” he advises.

The main nitrogen application winter wheat in April can be split in half with one mid-month and another at the end of month with little effect on yield.

“The physiological window for applying nitrogen is wide; there is no single critical time for fertiliser,” he says.

Indeed, he adds that nitrogen applications should be flexible and so take account of the big unknown to growers – the weather.

Our weather determines crop growth potential, which in turn determines the water and nutrients required to fulfil that potential, and also how much nitrogen can be lost or gained in the soil.

Because we can not predict the weather, nitrogen recommendation can seem often more of a lottery than an exact science, but some estimates for nitrogen still needs to be made.

For many growers, DEFRA’s Fertiliser Manual RB209 is the recommendation bible, but it is important to realise this guidance is aimed at the average UK wheat crop.

“If you are an average wheat farmer, these recommendations will fit the bill, but if you aspire to more, they are likely to fall short,” he says.

The first step is to assess what yield you would expect, such as the average over the last few years and what is the quality target for different end uses – such as breadmaking, biscuit, feed or fuel.

“A big crop of high-quality wheat can only be grown with a big input and uptake of nitrogen,” he says.

Growers need to manage nitrogen to produce enough ears to set sufficient grains (say 500 ears/sq m) and to produce a leaf canopy big enough to intercept most of the light.

All crops obey the law of conservation of matter and this imposes a “mass-balance” constraint on crop nitrogen requirements. Basically, a crop can only take up as much nitrogen as is available in the system.

Dr Barraclough gives the example of a medium soil of average soil nitrogen supply (SNS) index 1 for which the maximum nitrogen applications by RB209 for winter wheat is 220kg/ha.

On this type of soil the maximum yield would be only 8.7t/ha, he calculates, and the only way yield can be raised is at the expense of grain quality or by increasing fertiliser recovery (see Nitrogen take-up by wheat type, Example A, right).

Conversely, if a wheat grower was aiming to grow a top-yielding 12t/ha crop of 13% protein breadmaking wheat on a similar soil then Dr Barraclough calculates that the crop would need 405kg/ha of nitrogen fertiliser (see Nitrogen take-up by wheat type,  Example B, right).

Dr Barraclough says that regulations for nitrate vulnerable zones (NVZ), or land at risk from nitrate pollution, are more realistic than RB209 in that they do make allowances for yield.

These NVZ regulation specify a limit of 220kg-N/ha for a standard yield of 8.0t/ha. However, an additional 20kg-N/ha is allowed for every tonne above this 8t/ha standard, and an additional 40kg is permitted for breadmaking wheat varieties.

“A big crop of high-quality wheat can only be grown with a big input and uptake of nitrogen.”
Peter Barraclough, Rothamsted Research

Therefore, the maximum application allowed for the expected 12t/ha crop of breadmaking wheat in Example B would be 340kg-N/ha. However, this is still insufficient for a 12t/ha crop with a 60% recovery fertiliser recovery.

But as these NVZ regulations are a farm average maximum, individual fields could receive more if other fields receive less.

With nitrogen fertiliser uptake only 60% efficiency, researchers estimates that 20% is lost from leaching and de-nitrification. The first occurs largely over winter, whereas the second is most likely after heavy rain in the spring.

Leaching is difficult to control as it happens in the winter months, but de-nitrification into gaseous nitrogen happens in waterlogged anaerobic soils and can be minimised if drainage is good and if nitrogen is delayed when heavy rain is forecast, he says.

The other 20% is lost by immobilisation, when bacteria in the soil competes with the crop for the nitrogen especially in warm and moist soils. This can be minimised by applying small doses of fertiliser as wheat crops generally compete very strongly for nitrogen against the bacteria.