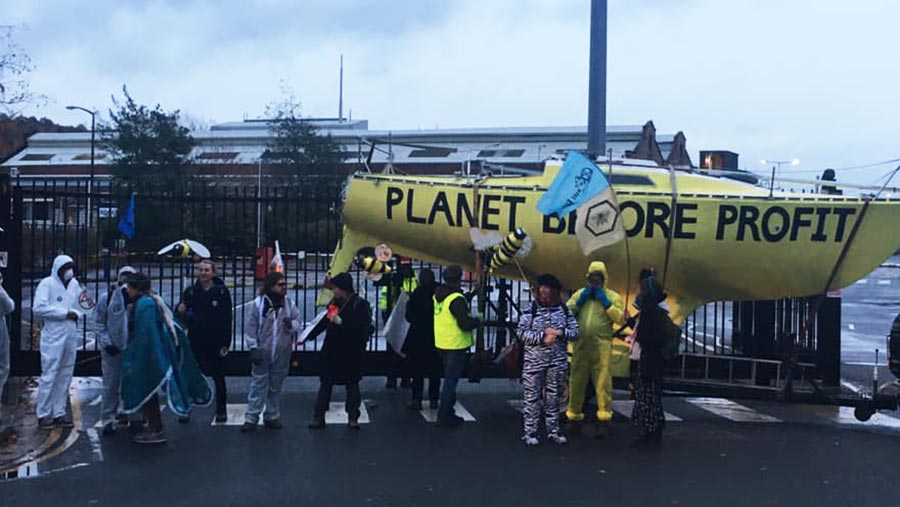 Climate activists have staged a protest against the use of chemicals outside Syngenta’s manufacturing plant in Huddersfield.

Activists from Extinction Rebellion blockaded the entrance to the plant on Leeds Road on Friday (15 November), using a yellow boat and human chains.

Red-robed protestors, dubbed the “Red Brigade”, staged a slow-motion demonstration while posters were attached to bus stops and lampposts along Leeds Road criticising the impact of pesticide use on bee populations.

Syngenta’s front gates on to Leeds Road were open again at around lunchtime on Friday after the protest ended.

The company recently announced plans to cut its carbon footprint by at least 50% by 2030 and to bring two technological breakthroughs to market each year.

Last month, it announced a $2bn (£1.55bn) commitment to innovation over the next five years to help farmers better deal with threats posed by climate change.

“Through our Good Growth Plan, Syngenta enhance farmland biodiversity, having implemented 301 projects in 39 countries, benefiting a total of 6.4 million hectares of land,” a spokesman said.

“Our 15-year-old global Operation Pollinator programme originated in the UK, increasing habitats for bees and pollinating insects, and is proven to deliver significant increases in biodiversity.”