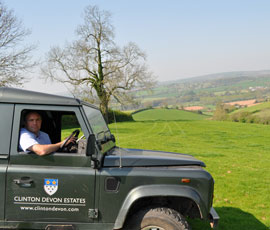 A block of conventional land has just come back in hand at our organic Management Matters farm in the south west. Paul Spackman discovers how it will be integrated into the existing system

When the 80ha (200-acre) Houghton Farm came back in-hand last month, it did so at an opportune time for Clinton Devon Farms‘ manager George Perrott.

Together with the estate’s trustees, family members and farm staff, he is in the process of setting out a strategic 10-year plan for the estate and farming operations. This is looking at everything from what is and isn’t working to future expansion plans and business strategy. A key part of this is whether to remain as an organic unit and expand, or to convert back to conventional production.

“A lot of details are still being discussed, but at the moment we are very pleased with the profitability of going organic and have no plans to go back to conventional,” says Mr Perrott. March’s Dairy Crest milk price for 287,000 litres averaged 34.85p/litre, which left a margin over concentrates of 24-26p/litre for cows that are yielding around 6,000-6,500 litres a cow a year.

But he is wary profitability can easily change, particularly with rising feed costs and fluctuations in organic premiums over conventional, so is keeping an open mind about what to do with the land that has just come back in-hand after almost 500 years of being farmed by the same tenant family.

The current plan is to start the process of organic conversion this spring, but wait until the rest of Clinton Devon Farms has completed its first five years of being fully organic before applying for the conversion subsidy for the new land. “If we apply for the conversion grant on more land before those first five years are up next May, the scheme rolls over into a new one and the whole farm will have to remain in it for another full five years,” he explains.

“You’re given 12 months from starting the conversion process to apply for the subsidy, so if we start the process this May, it should be about right for applying to the scheme next year.

“At the moment I don’t want to risk being tied in for another five years. If we complete the first full five years, at least that means we have the option of getting out of organic at any point after that without surrendering the conversion subsidy.”

Mr Perrott says that in total, the conversion subsidy will be worth £650/ha over five years, which equates to around £50,000 across the 80ha coming back in hand. “Within 12 months we’ll know whether we want to stay organic or not and it may turn out that we never go down the full conversion route.”

For now at least though, the land, predominantly grassland on sandy loam soil similar to the rest of the farm, is being managed as “in-conversion”. Some 20-25ha (50-60 acres) has been ploughed up and sown with organic Tybalt spring wheat, while the remainder will be re-sown with new organic grass and clover leys later this summer. “Given how dry it’s been, I’m a bit nervous we won’t get enough rain for leys to establish before the summer, so at least if we wait until later in the year, we should be guaranteed some rain in September.”

Before drilling the organic wheat seed, Mr Perrott took advantage of being able to use conventional inputs to give the land and yields a boost during the conversion process. Contractors were brought in to apply a dose of Roundup (glyphosate) to take out couch and other weeds, plus the land also received 250kg N/ha of ammonium nitrate fertiliser. The other areas of grassland are also likely to get a dose of Roundup before re-seeding. Enough fertiliser was also purchased to treat all of the extra grassland area, but application has been postponed due to the recent spell of dry weather, he says.

“Agronomically the land has been looked after and farmed well, but the existing leys are looking a bit tired and are used to having nitrogen, so haven’t got any of the fertility-building clovers,” Mr Perrott says. “The majority of the land is ploughable, but there are some pretty big stones, which could be a problem when we come to reseed it,” he notes.

The new land will also require a considerable programme of capital investment, which will include upgrading an existing trackway, new fencing and renewing the water system with new pipes and troughs.

The land at Houghton Farm has a central 16,000gal concrete reservoir, which Mr Perrott wants to connect to Clinton Devon’s own water supply and then use it to supply the troughs. “We’ll either trench the new pipes in ourselves, or get a contractor to mole them in – the large stones might make this tricky though.”

Some hedge laying and tree planting will also be required and one of the sheds will be converted into an area for cattle handling. “The shed is about nine foot wide by 60ft long, which is a really awkward shape, but I reckon if we install an indoor crush and race, it should turn it into a useful space.” The only other building is an old corrugated tin apex shed, which, for now, will be retained for storing straw or machinery during the winter. “It’s a decent dry shed, but we’re a bit limited in what we can do with it in the long term, so may decide to pull it down and bring the land back into production.”

As part of the fencing work, Mr Perrott says some fencelines may be altered to fit in better with the surrounding farms; Houghton sits between the existing sheep unit at Ashtree farm to the north and the Otter Farm dairy unit to the south. “Strategically it’s a great location for us, so it’s a question of how we can make it work best all-round. Some fields may be better being used for sheep grazing, while others for cattle, or some for growing whole crop [silage].”

Mr Perrott adds: “The slurry lagoon has taken a lot of our time over the past few months as we’ve tried to do as much as possible ourselves to keep costs down. I reckon there’s about a week’s worth of work left on that, and then it’ll be time to get on with the next project of getting this new land into shape.”

Unusually warm, dry weather for much of March and early April led to a relatively trouble-free lambing period at Clinton Devon Farms. The average lambing percentage across 400 ewes was 170%, which was on a par with normal, Mr Perrott says.

Reducing flock numbers from 750 [check] to 400 ewes last year made a big difference to the workload and meant that the shepherd needed little extra lambing help this year.

Another advantage of reducing the sheep numbers is that less cake has been bought this year and stocks of stubble turnips, silage and bedding have all lasted longer. “With the late, slow start to grass growth we’ve had this spring and the recent dry weather, we could have been in a lot tighter situation with feed and grazing availability if we’d had more sheep,” Mr Perrott says. “As it is, we’ve still got enough grass to turn the youngstock out.”