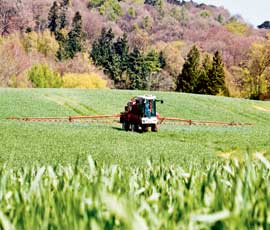 UK farm incomes could be slashed by as much as 17% if revised EU pesticide legislation leads to a ban or restricted use of key triazole fungicide products.

Yield reductions of 10-15% would be the main driver behind the revenue loss, but increased expenditure on remaining chemistry would also have an impact, according to a recent study carried out by

Triazole fungicides are in the firing line due to concerns that the active ingredient acts as an endocrine disruptor and interferes with hormones in the body. The extent of this effect and the definition of endocrine disruption is currently being debated, but some triazole products could be lost if they fall within the classification.

The impact of a triazole ban on farm businesses was studied by estimating the impact on gross margin and farm net income using a macro-economic analysis.

Three scenarios involving different levels of triazole restriction were simulated, from a complete ban to limited use of certain products in a rotation containing 33% wheat, 33% winter barley, 29% oilseed rape and 5% sugar beet.

For a complete ban, the study assumed yields for each crop in the rotation would decrease by 25%, with the exception of winter barley, which was predicted to fall by 6.5%.

With these assumptions, gross margins were predicted to fall by 9% in the UK, 11% in Germany and France and by 20% in Poland.

But when fixed costs were considered, the impact on net farm incomes would be even greater, falling by as much as 17% in the UK, 11% in France, 20% in Poland and 29% in Germany.

Resistance build-up to remaining actives would be a key concern without triazole chemistry, which would cause large yield fluctuations. In high disease-pressure seasons, this could cause incomes to plummet by more than 60%.

The study concludes that farms with high fixed costs would struggle to absorb these profit fluctuations.

Decoupled direct payments would help stabilise incomes on these farms in the short term, but if these were limited following the 2013 CAP reforms, they could become perilously low and unstable.

In the initial part of the study, interviews were carried out with farmers and technical advisers in three wheat growing areas – one in the UK, one in France and the other in Poland – to determine how important triazoles were for controlling fungal diseases.

Yield maintenance and prevention of resistance build-up were the main benefits of triazole chemistry, according to the farmers and advisers questioned.

If triazole use was restricted, it would make resistance management “almost impossible” and would significantly reduce disease control options.

This would make it difficult to eradicate core fungal diseases such as septoria and fusarium.

Of all triazole products on the market, prothioconazole and epoxiconazole received the highest ratings from experts and technical advisers.

The study concludes that it is crucial to maintain a broad spectrum of plant protection products to avoid the build-up of resistance. Triazole fungicides, particularly epoxiconazole, are considered particularly important because of their curative and protectant activity.

At an EU level, a ban on triazole fungicides could reduce EU production of wheat, oilseeds and sugar by as much as 18-20%, while all other producers on world markets would see an increase in production volumes and market share, the report says.

This could change EU trade status from a net exporter to a net importer for wheat and sugar and significantly increase its oilseed imports.

Policymakers should consider whether the public health or environmental benefits of removing triazole chemistry would be justified given the damage European agriculture would sustain, the report says.

The Plant Protection Products Regulation (EC) No 1107/2009 is a revision of Directive 91/414/EEC that currently governs the approvals regime for plant protection products.

The new legislation will be introduced in the UK by 14 June 2011 and active substance evaluation is being adapted to meet the provisions of the regulation.

Within the proposals there is a four-year window to define endocrine disruptors. The Chemicals Regulation Directorate has developed draft criteria for their assessment and is working with other member states as the European Commission develops its proposals. “We are continuing to press for a harmonised procedure for the production, maintenance and implementation of technical guidance documents,” the CRD says.