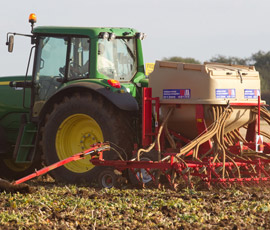 Cereal growers planning to save their own seed this season need to be alert for fusarium ear blight which can cut germination rates in the subsequent crop.

A fusarium epidemic last season caused big problems with certified seed and home-saved seed growers in 2012, and experts say the problem is likely to resurface this season.

Some fusarium species such as graminearum can kill seed outright, but microdochium is potentially a more serious threat as it does not kill the seed and can lead to reduced germination.

Seed testing can be done post harvest, but growers should look to fungicidal ear wash sprays to control the disease at the early flowering T3 timing, especially if the weather is wet.

“If I was farm saving seed, I would identify which crops are intended for use and look for specific control at T3,” says Simon Edwards, professor of plant pathology at Harper Adams University.

He says that a triazole fungicide, such as prothioconazole or metconazole, at early T1 and T2 timings can give some degree of control, but the main treatment is at T3.

“My advice for seed crops is to put on a high rate of fungicide at T3 and prothioconazole is the most effective at controlling microdochium,” says Prof Edwards.

“My advice for seed crops is to put on a high rate of fungicide at T3 and prothioconazole is the most effective at controlling microdochium.”
Simon Edwards, professor of plant pathology at Harper Adams University

Microdochium tends to thrive in cold and wet conditions and predominates in the North, while other fusariums like graminearum prefer warmer conditions.

Phil Jennings, plant pathologist at the Food and Environment Research Agency, says microdochium should be the key focus for seed growers as the resultant seed will germinate but can lead to stem-based infections.

He again suggests prothioconazole to cover both microdochium and graminearum, but other triazoles such as metconazole and tebuconazole have an effect on graminearum.

“If there is wet weather at flowering, seed growers need to be concerned about microdochium and fusarium and not hold back with a fungicide treatment.” says Dr Jennings.

The key control timing is at the T3 stage of early- to mid-flowering (GS61-GS65) which is expected to occur in early to mid June is most of the country this season.

One of Britain’s biggest farmers, Sentry, is a major user of home-saved seed, using 500 tonnes of winter wheat seed saved on the farm across its 20,000ha of predominantly arable land.

Fusarium was present in seed crops last season, and the group cleaned the seed thoroughly as smaller shrivelled grains are more likely to be infected with fusarium, and then a fungicidal seed treatment with prothioconazole was applied.

“The fusarium seed loading was high so we used an approved seed dressing and also cleaned the seed to lower the fusarium risk,” he says.

Learn about seed certification schemes on our Academy