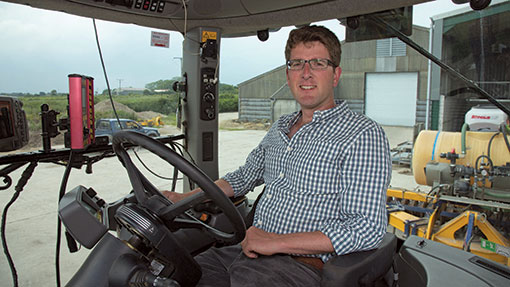 I am all in favour of the general public enjoying the countryside; after all they have earned the privilege with their contribution to the annual farms income.

I just wish they wouldn’t enjoy the same bit of our green and pleasant land as me. Perhaps we could campaign for the public to be restricted to National Parks and National Trust properties from the end of July to the middle of August.

I object to those going through a midlife crisis which involves them either wearing lycra on a bike, or messing around with someone else’s wife behind one of my hedgerows, or a mixture of both, when I am trying to work.

We are also blessed with abundant blackberry bushes along our local lane, which attract foraging types who want to reap the best of mother nature’s harvest.

But must they park either in gateways of fields that clearly have a combine working in them, or in the middle of a single-track lane and then look at me as if I am stupid when they see the exasperated look on my face?

I have now worked out the reason for the proliferation of blackgrass across the country. It is purely psychological, enabling it to mess with your mind.

It has taken over the reins from Steve Waugh, a most vocal Australian cricket captain, and uses mental disintegration as its main weapon.

Its success has nothing to do with cultivation, drainage, soil type or rotation; only that it spots a weakness in your psyche and then drives a coach and horse straight through it.

It has greater sensitivity than a dog’s nose. As soon as something with a seed dressing is planted it jumps into life, but try and make it grow and it will just lay dormant, waiting for the foolish farmer to crack first and get the drill out.

That said we have planted some wheat this year on fields that I would classify as “clean”. Whether this will prove to be the right decision will be seen in May, but the thought of having to combine half the farm as spring barley filled me with dread.