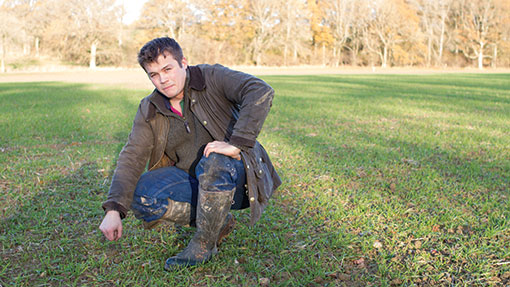 Now is that horrible point in the arable farming year where weeds poke their ugly heads above the wheat and show themselves for all to see. Previously, it was just you, the agronomist and sharp eyed dog walkers.

Blackgrass in particular is very prominent in some of the wheat here, even though it had a stacked pre-em, Horus (Atlantis) and residual partner applied in the autumn in “good growing conditions”.

So resistance testing this year, may lead to us saving some money on Atlantis, if it’s seriously resistant. In this vein, thought needs to be applied to rotation again. Currently, I’ve been forced into spring cropping on heavy land due to the rainfall last autumn.

Spring crops and heavy soils don’t mix generally so I’ve had to think about how to tackle this aspect and try to increase our blackgrass control.

To tackle our heavy soils, we are designing a new bean drill and have bought an additional cultivator to form the base for this.

At present, it is a sketch rather than anything physical and is entitled “winter project”. A Sumo Trio seemed the right machine to go for, with its six deep cultivating legs and disc/packer combination that will hopefully leave a good enough seed-bed to give pre-emergence herbicides the best chance of working.

CAP reform is a worry for everyone with ELS money being cut and not looking like it will be replaced. David Richardson points out that EU policy will not be led by the UK; indeed, we are a very small contingent in an expanding pond – a pond which does give us a relatively good deal on trade and gives us our subsidy.

If UKIP win seats in a general election rather than a European election what will happen to farming then?

I’m sure the Norwegian and Swiss high farming subsidies would be preferable to New Zealand’s lack of them. But I fear we will go the way of New Zealand. Cutting farm subsidies would enable the government to make a quick buck. But it would hinder us don’t you think?